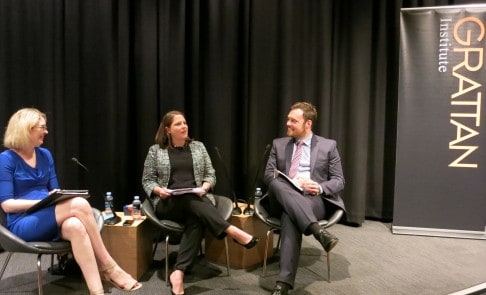 Targeting the tax breaks for superannuation

The numbers for superannuation tax breaks are dizzying. They cost the Commonwealth budget somewhere between $20 billion and $30 billion a year depending on how you count them. Grattan Institute’s work in Balancing Budgets suggested specific reforms that could save up to $8 billion a year. A forthcoming Grattan Institute publication will work through the options in detail.

Meanwhile, superannuation tax breaks are in the news. After being ruled out by the Abbott government, they are back on the table in tax reform discussions being led by the Turnbull government. There are any number of competing proposals for change – including many from the industry itself.

In this Forward Thinking event at the State Library of NSW, Danielle Wood and Brendan Coates from Grattan Institute discussed the issues with Joanna Mather, who covers tax and superannuation for the Australian Financial Review. What is the purpose of superannuation tax breaks? What criteria should be used in analysing competing proposals for change? What changes would minimise the economic impacts, improve budget balances, be fair, and remain administratively workable?

Joanna Mather covers national affairs for the Australian Financial Review from the national newspaper’s Canberra bureau. Her recent focus has been on tax, superannuation and industrial relations but prior to that she spent several years writing about education. In 2013, Joanna was named the Higher Education Journalist of the Year by Universities Australia and the National Press Club. She was also named an Outstanding Early Career Alumnus by James Cook University.

Brendan Coates is a Senior Associate at Grattan Institute. Before joining Grattan, Brendan worked with the World Bank in Indonesia, and prior to that, he undertook a number of roles with the Australian Treasury, including as part of the Treasury’s China Policy Unit. Brendan holds a Masters of International Development Economics from the Australian National University and Bachelors of Commerce and Arts from the University of Melbourne.

Danielle Wood is the Australian Perspectives Fellow at Grattan Institute. Danielle has extensive experience in advising on public policy and competition law issues. She has previously worked in the Economics and Mergers Investigations Branches of the ACCC, at NERA Economic Consulting and at the Productivity Commission. Danielle has a Bachelor degree in Economics (Hons) from the University of Adelaide and a Masters Degree in Economics (Hons) from the University of Melbourne. She recently completed a Masters in Competition Law at the University of Melbourne.