The mining boom: impacts and prospects

The mining boom: impacts and prospects examines the fears some Australians have about the potential adverse consequences of the 10-year mining boom. People worry about the damage caused by the high dollar, the impact of the boom on non-mining regions and the risk Australia will turn into a quarry economy. These are understandable concerns but the evidence does not bear them out.

The incomes of most Australians – not only those from mining states – have risen faster during the boom decade than in the one before. And while the boom has pushed up the dollar and made it hard for industries that compete internationally, Grattan’s analysis of comparable events overseas suggests that manufacturing and other trade-exposed industries will bounce back quickly once the exchange rate falls.

While there is always the risk of a downturn as resources investment and prices decline, Australia has low inflation and a recession is far from inevitable.

The report finds, however, that one community concern is well-founded. Tax decreases and spending increases, funded by the $190 billion the Commonwealth Government has earnt from the boom, have been larger than Australia can afford in the long run. Some spending was justified by the response to the Global Financial Crisis and some has been well invested, but underlying budget deficits must now be repaired in more difficult times.

Governments should resist the temptation to protect affected industries, but continue to invest in skills and education to help workers and citizens adapt to an ever changing, globalised economy. These skills will be even more important as the longest and largest boom in 150 years winds down.

Jim Minifie writes about the impacts and prospects of the mining boom in The Australian Financial Review and The Conversation.

Watch an interview with Jim Minifie 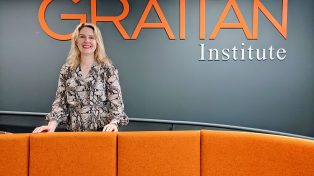 Grattan Institute · Grattan's 2020 Year in Review with Danielle Wood 2020 was an enormous year for Australia, but it's also been a big year for the Grattan Institute. We've seen bushfires, the coron…