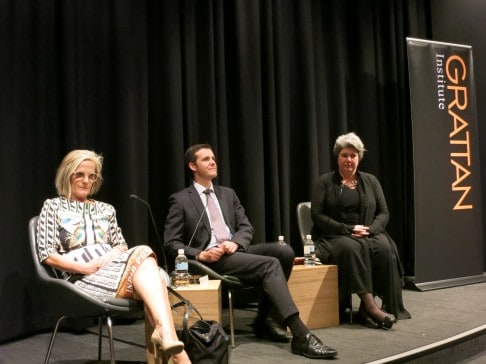 In March we launched Grattan Institute’s first book, City Limits: Why Australia’s cities are broken and how we can fix them, by Jane-Frances Kelly and Paul Donegan.

Listen to a podcast of the Melbourne launch

Listen to a podcast of the Sydney launch

Watch a video of the Melbourne launch

Our bush heritage helped to define our identity, but today Australia is a nation of cities. A higher proportion of Australians live in cities than almost any other country, and most of our national wealth is generated in them.

For most of the twentieth century, our cities gave us some of the highest living standards in the world. But they are no longer keeping up with changes in how we live and how our economy works.

The distance between where people live and where they work is growing fast. The housing market isn’t working, locking many Australians out of where and how they’d like to live. The daily commute is getting longer, putting pressure on social and family life and driving up living costs. Instead of bringing us together, Australia’s cities are dividing Australians—between young and old, rich and poor, the outer suburbs and the inner city. Neglecting our cities has real consequences for our lives now, and for our future prosperity.

Using stories and case studies to show how individuals, families and businesses experience life in cities today, City Limits provides an account of why Australia’s cities are broken, and how we can fix them.

City Limits will be available at bookstores and through Melbourne University Publishing.

Lucy Turnbull AO is an urbanist, businesswoman and philanthropist with longstanding interest in cities and technological and social innovation. She chairs the Committee for Sydney and is Chairman of Prima BioMed Limited, an ASX-listed biomedical company undertaking a clinical development for immuno-therapeutic cancer treatment. She is the director of Sealink Travel Group Limited. She is currently a board member of the US Studies Centre at Sydney University, the Australian Technology Park, the Redfern Foundation Limited, the Turnbull Foundation and the Grattan Institute. She was deputy chair of the Council of Australian Government’s (COAG) City Expert Advisory Panel. She was the first female Lord Mayor of the City of Sydney from 2003-4. In 2011, Lucy became an Officer of the Order of Australia for distinguished service to the community, local government and business. In 2012, she was awarded an honary Doctorate of Business by the University of New South Wales.

Robert Doyle was elected in 2008 and 2012, and is the serving Lord Mayor of Melbourne. Robert Doyle is a Principal at The Nous Group, a management consultancy business based in Melbourne and, since 2007, has been Chairman of Melbourne Health (The Royal Melbourne Hospital). Robert is President of the Lord Mayor’s Charitable Foundation, Chairman of the Royal Melbourne Hospital Foundation and a Trustee of the Shrine of Remembrance. Robert is also an Ambassador for Odyssey House, a drug and alcohol abuse rehabilitation facility, an Ambassador for SecondBite, a not-for profit organisation committed to making a positive difference by distributing fresh food to the disadvantaged and homeless, an ex-officio member of Cancer Council Victoria and an Ambassador for Field of Women, a charity raising awareness of breast cancer, an Ambassador for the White Ribbon Day Foundation, an international day for the elimination of violence against women, an Ambassador for the Juvenile Diabetes Research Foundation, the Honorary President of the Melbourne Region of the Scout Association and a Board member of the Plumbing Industry Climate Action Centre (PICAC) Ltd. In 2010 Robert was made a Fellow of Monash University. Robert recently joined the United Nations Advisory Committee of Local Authorities (UNACLA) as a committee member.

Jane-Frances Kelly was Cities Program Director at Grattan Institute from 2009-2014. She has led strategy work for the UK, Queensland, Victorian and Commonwealth governments. Prior to moving to Australia in 2004, she spent three years in the British Prime Minister’s Strategy Unit.

Paul Donegan is a Fellow at Grattan Institute. Paul has helped governments tackle some of Australia’s biggest social and economic challenges – as a Commonwealth and state public servant, ministerial adviser, and at Grattan Institute. Before joining Grattan, Paul worked at the Department of Prime Minister and Cabinet, the Victorian Premier’s department, and as the disability adviser to the responsible Commonwealth minister at the introduction of the National Disability Insurance Scheme.