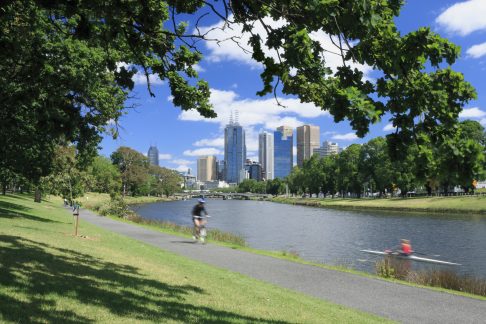 Melbourne in a time of change

We all know that Melbourne’s been booming, with population growth amongst the highest in the developed world. And people continue flocking here from around Australia and around the world. So far, Melbourne has adapted remarkably well. It may be a bit more crowded on the roads or public transport, but people’s commute distances and times are barely changed from five years ago. This is due in no small part to the spread of jobs right across the city, and to the changes individual Melburnians make to how they travel around their cities, where they live, and where they work. The big question is whether it’s going to continue this way.

Marion Terrill from the Grattan Institute, Peter Mares, a journalist and migration expert who’s just published a book on housing policy, and Miriam Slattery, who heads Strategy and Partnerships at the City of Melbourne and is a transport enthusiast, explored the state of Melbourne and where to from here at this Policy Pitch event.

Miriam Slattery spent more than ten years working in the Victorian Government improving transport, sustainability and governance outcomes, including as a ministerial adviser to the Minister for Public Transport. Miriam has provided advice on issues from myki to reviewing the way native vegetation permitted clearing is regulated to the optimal machinery of government changes to achieve good public policy outcomes. Miriam left the public sector in 2016 for Netball Australia as Head of Stakeholder Relations and Public Policy, including heading up the Integrity Unit, during a transformational time for women’s sport. She was drawn back to the public sector by the opportunity to work in the CEO’s office as Manager Strategy and Partnerships at the City of Melbourne and experience the best of local government and influence decision making for great outcomes for the City. Miriam has recently been appointed as an Associate Director on the Netball Victoria Board and will forever remain a transport policy geek and gunzel.

Peter Mares is senior moderator with The Cranlana Programme, a not-for-profit organisation that promotes ethical leadership. He is also a regular contributor to Inside Story magazine and an adjunct fellow in the Centre for Urban Transitions at Swinburne University. Previously, Peter worked for 25 years as a journalist and broadcaster with the ABC. He is the author of three books: Borderline, an award-winning analysis of Australia’s policies towards asylum seekers and refugees, Not Quite Australian: how temporary migration is changing Australia published in 2016 by Text, and his latest book, also published by Text, No Place Like Home: Repairing Australia’s Housing Crisis.

Marion Terrill is a leading policy analyst with experience that ranges from authoring parts of the 2010 Henry Tax Review to leading the design and development of the MyGov account. She has provided expert analysis and advice on labour market policy for the Commonwealth Government, the Business Council of Australia and at the Australian National University. She joined the Grattan Institute in April 2015 to establish the Transport Program, and has published on investment in transport infrastructure, cost overruns, value capture, congestion and discount rates.

Megan French is the Marketing Manager for Grattan and the producer and host of the Grattan Institute podcast. Her previous roles in Melbourne have focused on event management, particularly in corporate environments as well as brand management, marketing and relationship building. Megan moved to Melbourne in 2012 following a brief stint living in Italy and prior to this, spent 5 years with the Department of Education Queensland, primarily as a policy officer.