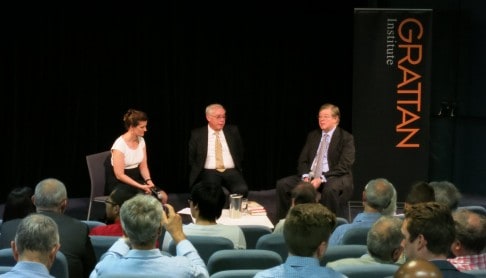 Other People’s Money: big finance and where it’s taking us

What is the finance industry for? And why is it so profitable?

But today less than ten per cent of bank lending is to firms and individuals producing goods and services. Banks mostly loan money to other banks. Common sense suggests that when a closed circle of people continuously exchange bits of paper with each other, the total value of these bits of paper should not change much, if at all. And in this circle of intangible exchange, who cares if the loans go bad? As they say in the trading room, ‘I’ll be gone, you’ll be gone.’

One of Britain’s leading economists, John Kay sets out in his new book, Other people’s money: masters of the universe or servants of the people, to explain how post-GFC tweaks have not solved the underlying problems in the finance industry.

John Kay is a visiting Professor of Economics at the London School of Economics, and is a Fellow of St John’s College, Oxford, the British Academy and the Royal Society of Edinburgh. He is a director of several public companies and contributes a weekly column to the Financial Times. His previous positions include Director, Said Business School (Oxford); Professor, London Business School; and Director, Institute for Fiscal Studies. John Kay chaired the Review of UK Equity Markets and Long-Term Decision-Making, which reported to the UK Government in 2012. He is the author of many books, including ‘The Truth about Markets’ (2003), ‘The Long and the Short of It: Finance and Investment for Normally Intelligent People who are not in the Industry’ (2009) and ‘Obliquity’ (2010). His latest publication is ‘Other People’s Money: Masters of the Universe or Servants of the People?’ (2015). Some of his most influential, recent work has been on banking regulation.

Harrison Young is a director of the Commonwealth Bank of Australia and has also served as chairman of NBN Co Limited. His previous roles include as a director and member of the Financial Stability Committee of the Bank of England, chairman of Morgan Stanley Australia, and vice chairman of Morgan Stanley Asia. Harrison spent two years in Beijing as Chief Executive Officer of China International Capital Corporation. He has also worked as a senior officer of the Federal Deposit Insurance Corporation in Washington.