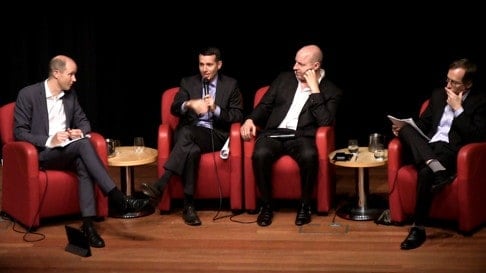 Online peer-to-peer platforms make it easier for communities of buyers and sellers to transact with confidence. Platforms are springing up for services as disparate as commuting, work, accommodation, finance and ideas. People use them to put assets to work, to share costs, and to find collaborators.

Peer-to-peer platforms are controversial. They foster new businesses and disrupt existing ones. They add value to some assets and can devalue others – including those, like taxi licences, sold by governments. In markets for labour and skills, they create new opportunities and new pressures from outsourcing and offshoring.

Policymakers around the world are struggling with how to respond to the peer-to-peer economy, while some incumbents seek protection. The new platforms challenge regulatory approaches designed for an earlier era.

– Why are peer-to-peer platforms so controversial?

– How big is the opportunity?

– What are the downsides?

– Why have policymakers struggled to respond?

– What should policymakers do — and stop doing?

– Can lessons from the P2P economy be applied to the public sector?

David Plouffe joined Uber as Senior Vice President of Policy and Strategy in September 2014. David is widely referred to as the “architect” of President Obama’s two presidential campaign victories.  He served as the campaign manager in the 2008 presidential election, and later as an outside advisor to the President since his first day in office. He served inside the White House as Senior Advisor to the President from 2011-2013. David is the author of The New York Times best seller, The Audacity to Win: The Inside Story and Lessons of Barack Obama’s Historic Victory and has been a Contributor for ABC News and Bloomberg Television.

Matt Barrie is the CEO of Freelancer. Matt is an award winning entrepreneur, technologist and lecturer, having won numerous awards including being named the inaugural BRW Entrepreneur of the Year in 2011. Matt was previously founder and CEO of Sensory Networks Inc., a vendor of high performance network security processors, which Intel Corporation (NASDAQ: INTC) announced in 2013 it was acquiring. Matt is also an Adjunct Associate Professor at the Department of Electrical and Information Engineering at the University of Sydney, where for the last 12 years he has taught Cryptography, and from 2010, Technology Entrepreneurship. He is the co-author of over 20 US patent applications.

Stephen King is Professor of Economics and co-director of the Business Policy Forum at Monash University in Melbourne. He is also Chair of the WA Economic Regulation Authority. Prior to joining Monash, Stephen was a Member of the Australian Competition and Consumer Commission (ACCC) from 2004-2009. Stephen’s main areas of expertise are competition economics and regulation, particularly as applied to new and emerging technologies. His work on payment systems, telecommunications and piracy has been published widely.

Dr Jim Minifie is the Productivity Growth Program Director at Grattan. Jim is a leading economist and writer, with a strong grasp of the Australian policy landscape. The program includes work on getting the most from technology and innovation, responding to structural change, and improving productivity in services. Prior to joining Grattan, Jim worked closely with Australian corporate leaders during his seven years as Chief Economist of the Boston Consulting Group.

Why oligopolies are not dominating Australian consumers

Published by the Australian Financial Review, Tuesday 5 December Around the world, many are concerned that competition is waning. They say large firms are dominating markets, pushing up prices and…