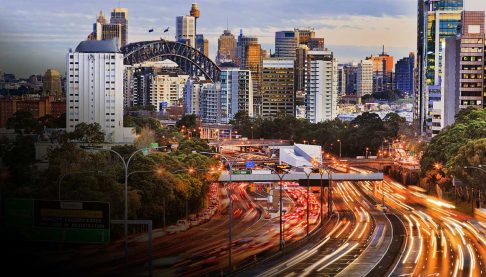 At this Grattan Institute/State Library of NSW Forward Thinking event, a panel of experts will discuss the proposal to charge drivers a fee to drive on the busiest roads at the busiest times.

Daniel Veryard is the State Director (NSW & WA) at Veitch Lister Consulting.  Daniel has 12 years of experience in transport economics, forecasting, policy and planning. He has led the assessment of major transport infrastructure projects across Australia.  Before joining VLC, Daniel was a project manager and economist at the International Transport Forum at the OECD in Paris. He has also worked as an economist for PwC, GHD, Mouchel (now WSP) and the Reserve Bank of Australia. He has worked on projects in all Australian capitals, and in south-east Asia, the UK and France.

Owen Hayford is a Senior Partner at DLA Piper, a global law firm. He has 25 years of experience advising on major public transport infrastructure projects in Australia. He has long-standing relationships with a number of high-profile and diverse clients in the transport sector — spanning government, operators, contractors, financiers, investors and technology suppliers — on some of Australia’s most significant projects.

Marion Terrill is a leading policy analyst with experience that ranges from authoring parts of the 2010 Henry Tax Review to leading the design and development of the MyGov account. She joined the Grattan Institute in April 2015 to establish the Transport Program, and has published on investment in transport infrastructure, cost overruns, value capture, discount rates and congestion. In October she published two reports: Why it’s time for congestion charging: better ways to manage busy urban roads, and Right time, right place, right price: a practical plan for congestion charging in Sydney and Melbourne.

Paul Austin is the Editor at Grattan Institute. Paul worked for many years as a journalist and editor at Fairfax and News Corporation. He reported from the Canberra and Spring Street press galleries, and was at various times Deputy Editor and Opinion Editor of both The Age and The Australian newspapers. He won a Quill Award for best deadline reporting and was highly commended in the Walkley Awards for best feature writing and the Quill Awards for best columnist. More recently he has been an independent media and communications consultant, specialising in speech writing, editing, and strategic and political advice.