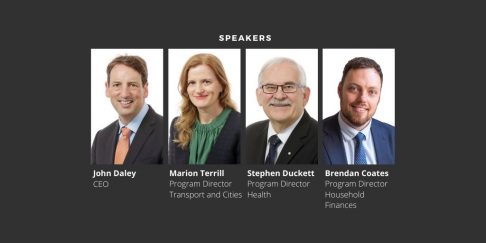 Webinar Event – Planning for recovery: Australia after the pandemic

Australia has done better than most countries in limiting the spread of COVID-19. The health crisis is not over, but attention is now turning to the ‘road out’ of the economic shutdown.

There are lots of uncertainties. What are the costs of relaxing too late – or too early? Should schools be reopened, and under what conditions? What parts of the economy should be taken out of lockdown, in what order, and with what changes? How much should we prioritise restoring social activities?

In this free Grattan Webinar, a panel of policy experts will provide perspective on these questions, and nominate Australia’s best strategy from here. And we want to hear your questions – now – so we can seek to give as many answers as possible. You can tell us what you want to know when you register for this special event.

Marion Terrill is Director of Grattan’s Transport & Cities Program. Previously, Marion authored parts of the 2010 Henry Tax Review, and lead the design and development of the MyGov account. She has provided expert analysis and advice on labour market policy for the Commonwealth Government, the Business Council of Australia, and at the ANU. At Grattan she has published on investment in transport infrastructure, cost overruns, value capture, congestion, and discount rates.