Facebook Twitter Subscribe to our Newsletter Please Donate
Home > Publications > Transport and Cities > Cities > City Limits: Why Australia’s cities are broken and how we can fix them
Programs 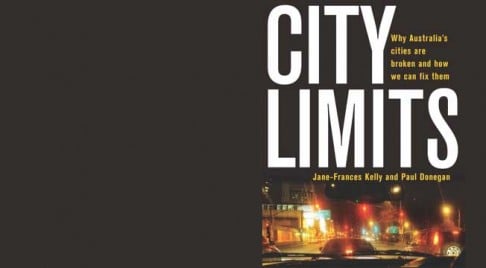 City Limits: Why Australia’s cities are broken and how we can fix them

Grattan Institute’s first book, City Limits: Why Australia’s cities are broken and how we can fix them, by Jane-Frances Kelly and Paul Donegan, is now available at bookstores and through Melbourne University Publishing.

Our bush heritage helped to define our identity, but today Australia is a nation of cities. A higher proportion of Australians live in cities than almost any other country, and most of our national wealth is generated in them.

For most of the twentieth century, our cities gave us some of the highest living standards in the world. But they are no longer keeping up with changes in how we live and how our economy works.

The distance between where people live and where they work is growing fast. The housing market isn’t working, locking many Australians out of where and how they’d like to live. The daily commute is getting longer, putting pressure on social and family life and driving up living costs.

Instead of bringing us together, Australia’s cities are dividing Australians—between young and old, rich and poor, the outer suburbs and the inner city. Neglecting our cities has real consequences for our lives now, and for our future prosperity.

City Limits  synthesises insights from Cities Program reports with new analysis and real-life case studies of how individuals, families and businesses experience life in cities today.  It provides a readable account of why Australia’s cities are broken, and how we can fix them.

Attend the book launches in Melbourne or Sydney.