What is a fair amount for university students to pay? - Grattan Institute

What is a fair amount for university students to pay?

In this Policy Pitch event, co-hosted by the Policy Shop podcast the following issues were examined: Why Australia has a hybrid public-private system of funding higher education; Consequences for the demand and supply of student… 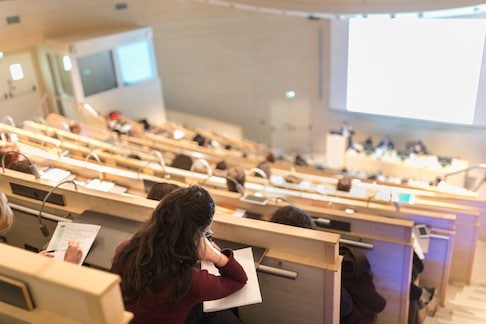 The 2017 Budget announced increases in maximum student contributions for government-supported university students, along with lower income thresholds for repaying student debt. The government argues that these savings are a fair rebalancing of public and private contributions to the cost of university education, with the government still paying more than half. Student groups oppose these changes, and some argue that university education should be free. Universities are caught in the middle. Facing their own funding cuts, they will almost certainly charge the maximum legally-permitted student contributions.

Jim Middleton has been reporting national and international affairs since 1970, first for the ABC and now as a correspondent for Sky News. For two decades, he was ABC Political Editor in Canberra – covering Prime Ministers Hawke, Keating and Howard. He was ABC North America correspondent in New York and Washington from 1980–1986, and has reported from every country in North, South and Southeast Asia – except North Korea. From 2008 to 2014, he presented Newsline and The World, broadcasting to and from Asia on Australia Network TV.

Sophie Johnston is the current National President of the National Union of Students. She was previously a student at the University of New South Wales where she served as the UNSW Student Representative Council President. Sophie has spent most of her university life working to improve quality and accessibility within the higher education sector, both internally and externally with bodies such as the Australian Human Rights Commission. She has worked extensively with student organisations to further the rights of students and advocate for greater funding for education and student income support. Her passion for diversity and inclusion within the higher education sector has been inspired by her own journey as a low-socioeconomic regional student; growing up in a small town on the South Coast of New South Wales before moving to Sydney for University.

Glyn Davis is Professor of Political Science and Vice Chancellor and Principal of the University of Melbourne. Professor Davis was educated in political science at the University of New South Wales and the Australian National University, before undertaking post-doctoral appointments as a Harkness Fellow at the University of California Berkeley, the Brookings Institution in Washington DC and the John F. Kennedy School of Government at Harvard University. Professor Davis teaches and researches in the field of public policy. His public sector service includes terms as the Director-General of the Department of Premier and Cabinet in Queensland, and as Foundation Chair of the Australia and New Zealand School of Government. He is a Fellow of the Academy of the Social Sciences in Australia and a Companion in the Order of Australia. He has served as Chair of the Group of Eight and Chair of Universities Australia. In 2008 Professor Davis co-chaired the Australia 2020 Summit and, in the same year served as a member of the Innovation Taskforce, an expert group commissioned to review Australia’s research and innovation systems. In 2010 Professor Davis presented the Boyer Lectures published as The Republic of Learning.

Andrew Norton is the Higher Education Program Director at the Grattan Institute. He is the author or co-author of many publications on higher education issues. His most recent reports are HELP for the future: fairer repayment of student debt and Mapping Australian higher education 2016, the fourth edition of a widely used reference on higher education trends and policies (to be released July 2016).