$34b and counting: beware cost overruns in an era of megaprojects - Grattan Institute

$34b and counting: beware cost overruns in an era of megaprojects

Published at The Conversation, 9 November 2020

A Grattan Institute report released today finds Australian governments spent A$34 billion, or 21%, more on transport projects completed since 2001 than they first told taxpayers they would. And as we enter the era of megaprojects in Australia, costs continue to blow out.

Transport projects worth A$5 billion or more in today’s money were almost unheard of ten years ago. Today, as the chart below shows, megaprojects make up the bulk of the work under way across the country. 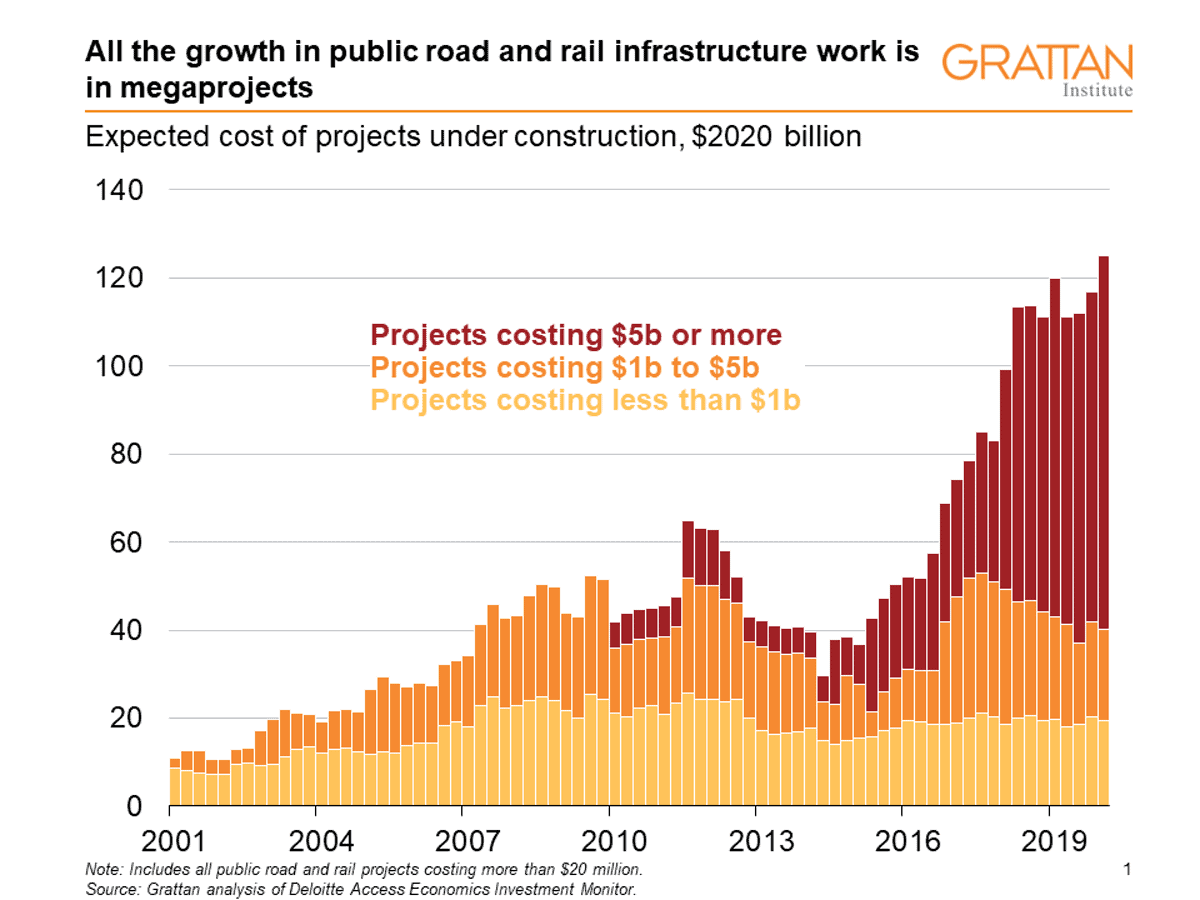 These megaprojects include WestConnex in Sydney, West Gate Tunnel in Melbourne and Cross River Rail in Brisbane. And this is to say nothing of some enormous projects being planned, such as Melbourne’s Suburban Rail Loop.

We are also hearing calls to add to this bulging pipeline. In June, the transport and infrastructure ministers of all states and territories said they were “clearing the way for an infrastructure-led recovery” from the COVID-19 recession.

The Grattan report, The rise of megaprojects: counting the costs, sounds a warning about the risks of this approach. The report uses the Deloitte Access Economics Investment Monitor to look at the final cost of all public road and rail projects worth A$20 million or more and completed since 2001. As the chart below shows, we found bigger projects overran their initial cost estimates more often and by more. 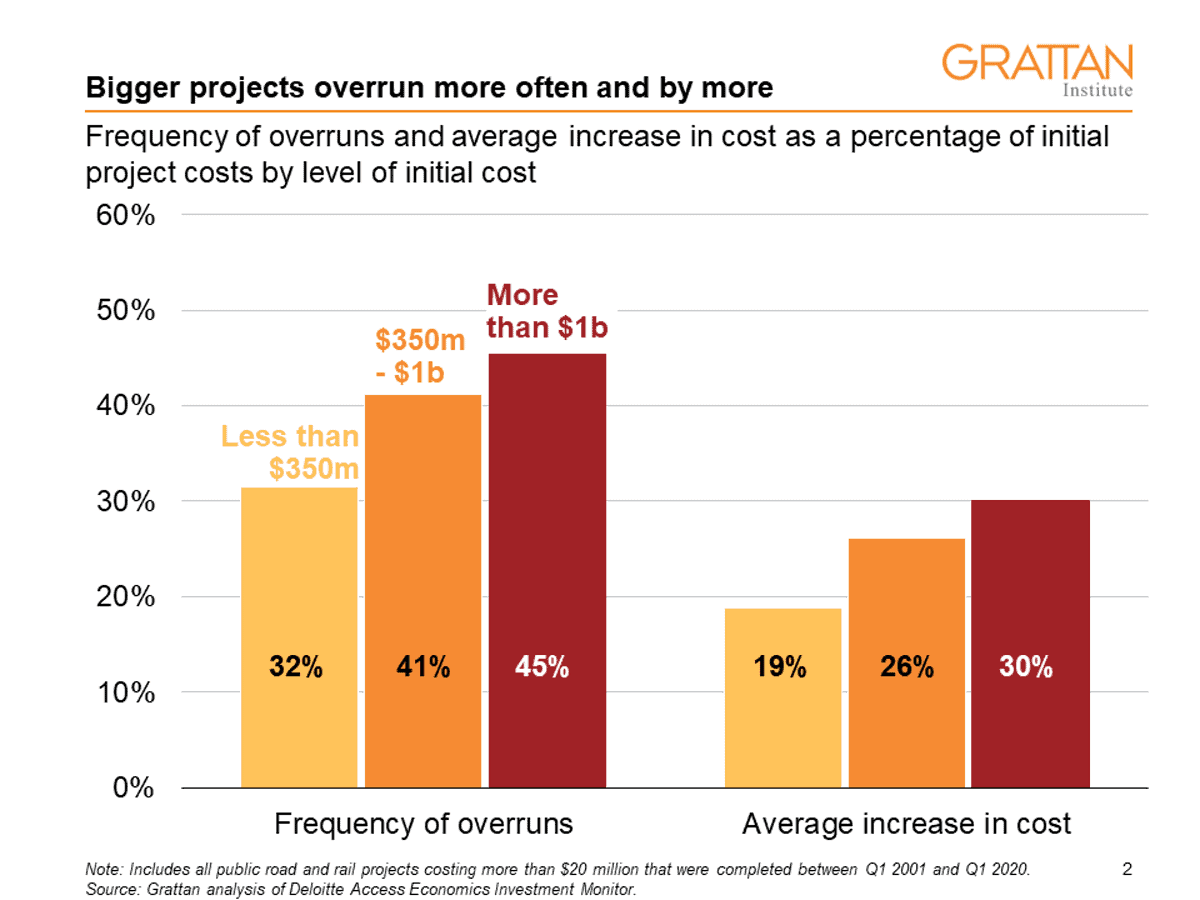 Almost half of the projects with an initial price tag of more than A$1 billion in today’s money had a cost overrun. These projects overran their initial costs by 30% on average. The extra amount spent on some megaprojects was the size of a megaproject itself.

Cost announcements before governments were prepared to commit formally to a project were particularly risky. Only one-third of projects had costs announced prematurely, but these accounted for more than three-quarters of the A$34 billion overrun.

When early costings of infrastructure turn out to be too low, it distorts investment planning in three ways:

There’s also a fourth and no less important problem: when unrealistically low cost estimates are announced, the public is misled.

Despite the experience of the past 20 years, the costs of big projects continue to be underestimated. The chart below shows A$24 billion more than first expected will be spent on just six mega megaprojects (that is, projects with an initial cost estimate of A$5 billion or more) now under construction. Overruns on other megaprojects have been reported too. 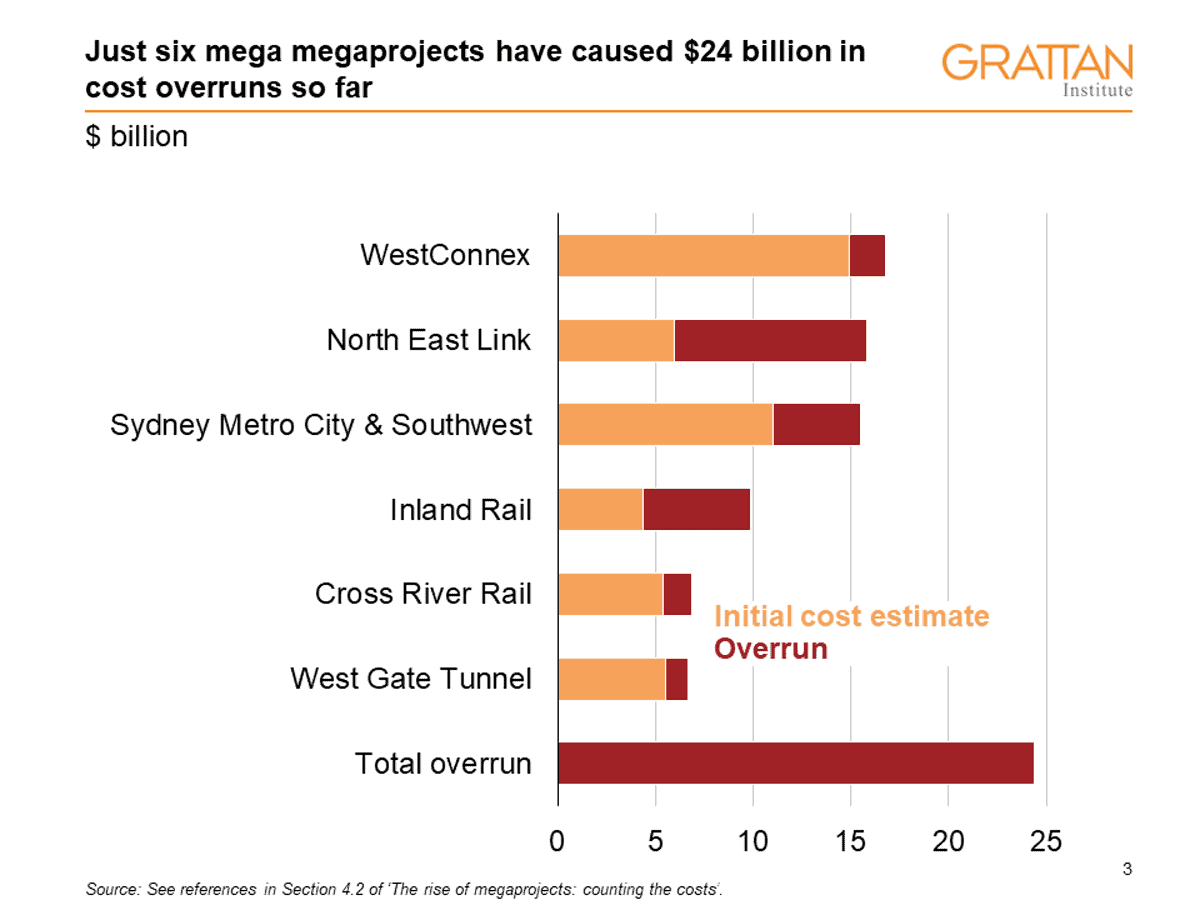 What needs to be done?

With megaproject costs continuing to blow out, governments should take immediate steps to manage better the portfolio of work under way — particularly if they are looking to add to it in the name of economic stimulus.

Each state’s auditor-general should conduct a stocktake of current projects. This would give the public and the government a clear picture of the situation.

Ministers should begin reporting to parliament on a continuous disclosure basis. Any material changes in expected costs, benefits or completion dates of very large projects should be disclosed.

Steps should be taken to put decisions on the incoming batch of projects on a sounder basis, too. When announcing a cost, ministers and government agencies should disclose how advanced the estimate is. If the proposal is at an early stage, they should quote a range of estimates.

Governments should also require their infrastructure advisory bodies to at least assess — if not approve — large proposals before funding is committed.

Looking further ahead, action is needed to stop the pattern of spending billions more than expected on megaprojects. State departments of transport and infrastructure should devote more resources to identifying modest-sized transport infrastructure proposals.

And governments need to start learning from the past. Detailed project data, particularly on expected and actual costs, should be centrally collated in each state.

If there is no change in the way infrastructure is conceived and delivered in Australia, then the era of the megaproject will indeed mean megaproblems.