A question for us all: what do we want from our government?

Published at The Conversation, Thursday 5 September 2013

Despite the election’s sound and fury, our major parties enthusiastically agree about much. They agree that budgets should balance – but don’t want too much virtue in the short term. They agree we should keep spending on health and education, spend more on infrastructure soon, and more on defence – eventually. No-one is attacking Australia’s welfare programs with a big knife.

Lurking beneath the consensus, however, are expectations of government that cannot be met, and budgets that in the long run will not balance. The deepest contradiction is the size and role of government. Voters want governments that are small, but do a lot.

Some say Australia already has “big government”, meaning government activity is a large proportion of the economy. The Centre for Independent Studies, for example, has launched a campaign to reduce government spending beneath 30% of gross domestic product.

The reality is that for a developed country, Australia has small government. This is so even if one notionally includes compulsory superannuation payments as part of Australian government, on the basis that they are analogous to compulsory social insurance and pension payments in other countries. 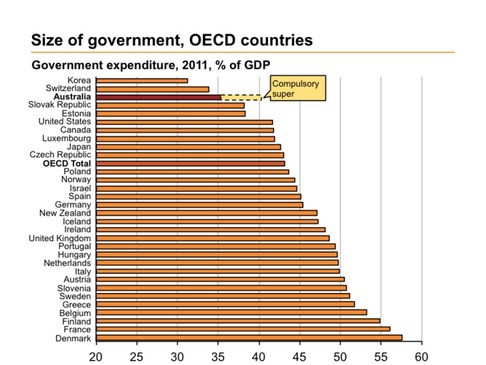 Of course, government in Australia is much larger than in Somalia. This is not surprising. As countries get richer, they almost always spend more of their money on welfare and health. Indeed, welfare, health and education are more than half of government expenditure. Add defence and infrastructure and you have two-thirds of Australian government spending. 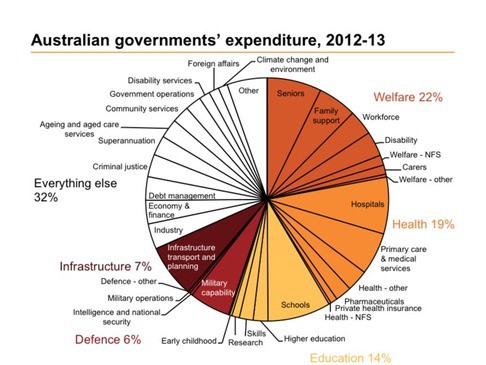 Not only is spending on services high, but it is also popular. Both major parties recently agreed to increase income tax to pay for a new national disability insurance scheme, and there was barely a mutter of public protest. Public support for welfare is not surprising: many benefit from the safety net of social security. A survey shows that 23% of households under the age of 57 relied on some kind of welfare at some stage over nine years, although only 10% relied on welfare for more than four years.

Spending on seniors in Australia is more of a universal benefit than a safety net. Despite 20 years of compulsory superannuation, most retired households still receive a substantial age pension. Unpublished Grattan Institute work shows that 70% of retired households receive at least a part pension – generally more than A$200 a week.

Again, however, there is little sign that age pensions will be constrained. Age pension expenditure has increased by over $13 billion in real terms since 2003. Much of the increase was the result of explicit government decisions to increase the rate and eligibility for pensions rather than the ageing of the population. 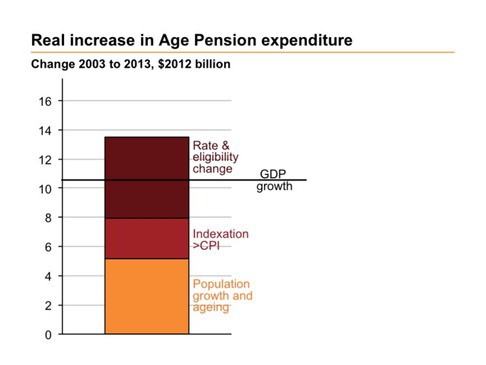 Given all this spending, how does Australia manage to keep its government relatively small? In short, we have the world’s most tightly targeted welfare system. Although benefits are relatively generous for those in the bottom 20%, governments provide relatively little in welfare payments to those in the top 80%. 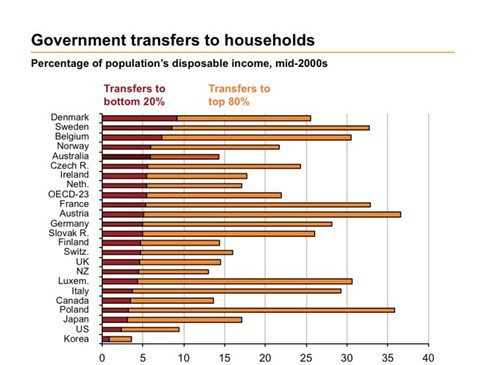 Middle class welfare in Australia is all but extinct, at least for those under 60. With the baby bonus and Family Tax Benefit A confined to low income families, and the opposition promising to abolish the schoolkids bonus, all that remains is some Family Tax Benefit B – and it is estimated that only $2 billion of this goes to households not in the bottom quintile.

Government size is further constrained in Australia by two distinctive policy innovations: the FEE-HELP scheme that funds higher education through income-contingent loans, and superannuation. These facilitate private funding for higher education and for retirement that governments fund directly in many other countries.

Although change won’t necessarily reduce the size of government, there are questions about the role of government in delivering social services. Government pays for many social services that companies and non-government organisations provide. These include drug and alcohol rehabilitation, homeless services, and childcare. The highest profile example is perhaps the private firms and non-government organisations that took over the role of the Commonwealth Employment Service in job services.

Such outsourcing forces governments to articulate more carefully the outcomes they want. However, as the job services industry illustrates, the transition can be difficult. Many believe this outsourcing was poorly designed so that private firms were rewarded for outcomes that would have happened anyway. And subsequent reform is made harder as private providers become vested interests.

But even if the role of government in welfare, health, education and social services changes, public spending is unlikely to shrink much in these areas. Government will still foot much of the bill.

Government size – and economic efficiency – is also driven by government spending on services such as electricity, water, telecommunications and transport. In more developed economies these services are often privatised, and implicit cross-subsidies give way to “user-pay” pricing. The Commonwealth government has largely sold out of airlines, telecommunications and banking. Its major remaining commercial asset is perhaps the postal service. Australia has relatively few services left to privatise, although there remains some way to go in privatising utilities in Queensland and New South Wales.

There is perhaps more opportunity to reduce government size by re-examining the multitude of government programs that emerge in response to political pressure for government to “do something” to fix social problems. Financial Review journalist Laura Tingle identified the “great expectations” that Australian governments must solve every social ill. Many programs for regional development, innovation promotion, and manufacturing support fall into this category.

Yet taking the axe to such programs is unlikely to radically change the size of government – they are a small portion of total government spending. Nor is cutting this spending ever easy: every program has a group with a vested interest in its preservation.

So despite the rhetoric, the size of government in Australia is unlikely to change radically. Should we be worried?

Some claim that countries with bigger governments tend to have less economic growth. All taxes discourage economic activity; if government is bigger and more tax is levied to pay for it, there may be more disincentives to investment and working. However, correlations between size of government and economic growth don’t imply causation.

The economic drag of government depends more on the efficiency of its tax system than its size. Consumption taxes such as the GST don’t distort economic activity much, and in particular they don’t discourage investment or workforce participation. Some other taxes, such as stamp duty, are inherently much more distorting, and can be substantial obstacles to using resources productively.

Tax reform is one of three major reforms that could make a big difference to Australian economic growth over the next decade, as Grattan Institute discussed in its Game-changers report. Our corporate taxes are relatively high, our consumption tax is relatively low, and we have a host of small taxes that drag on the economy.

Therefore, for a developed economy, Australia has relatively small government and few opportunities to reduce its size. Our tax system could improve. Does the absence of big economic reforms in the election campaign reflect an absence of big challenges?

Australia’s big challenge is that government is likely to spend more than its income for a long time. This has little to do with the size of government. Around the world there are small governments with deficits, and big governments with surpluses. It has everything to do with discipline: being prepared to cut lower value activities, and otherwise to increase taxes, so that government income matches the services people want. In the process we need to avoid taxes that severely distort economic activity – even though such taxes tend to be more politically palatable.

The alternative is that Australian governments continue to run deficits, increasing the interest bill – and therefore taxes – for future generations.

What might happen after the election? Recent history suggests little desire for substantial cuts to government services. There may be opportunities to cut some lower value activities. But few have been prepared to offend any voting minority in an election campaign. The appetite of the successful party to take on vested interests after the election remains to be seen.

Even so, the media and the voters seem ahead of our political parties in understanding that government budgets face long-term challenges that will require much more painful decisions than those foreshadowed during the campaign.

As Grattan Institute research has shown, in the next 10 years Australian government budgets are looking at deficits of around 4% of GDP – $60 billion in today’s terms. Improving the budget balance by just $10 billion would require lifting the GST from 10% to 12%, almost doubling municipal rates, or reducing the health budget by 10%. These unappealing measures illustrate the size of the task.

Australia is blessed with a high standard of living, governments that deliver much that people value, and relatively efficient administration. Unfortunately, however, the size of government that voters want is not currently matched by the taxes we are prepared to pay. The task of Australia’s next government will be to deliver the bad news that something has to give.

Published by The Guardian, Tuesday 4 December It has been an extraordinary year in politics – and no doubt most politicians are well and truly ready for a summer holiday. To help our leaders make…