Published at The Australian, Wednesday 29 May

Universities are unhappy about declining real funding and a diminished capacity to meet student, employer and community needs.

In coming years, school-leavers and their parents will be angry about reduced higher education opportunities.

And the government is left with a policy outcome it did not want and that will cause increasing political problems.

With the Coalition now back for another three years, we need to look pragmatically for ways to improve the higher education system’s performance while staying within the government’s budget boundaries.

The current funding caps that effectively ended demand-driven funding were not the Coalition’s first policy preference. They were introduced only after the Senate rejected lower per-student funding rates.

Demand-driven funding can deal with higher education’s biggest medium-term challenge: preparing for the baby boom cohorts who will reach university age from the early to mid-2020s.

Some states are looking at 20 per cent growth in their 18-year-old populations across the next decade, with higher increases in some local areas.

Under current policies, universities cannot meet this extra demand. Although funding increases technically are linked to population growth, this is national rather than local population change, refers to the 18 to 64-year-old population when three-quarters of commencing undergraduates are aged 24 or younger, is below the rate of inflation, and will not be paid anyway unless universities meet unannounced performance criteria.

No financially prudent university would commit to expansion in these circumstances.

At the same time, a government trying to contain public expenditure will be nervous about the cost of additional students.

Fortunately, spending can be reduced in ways that would make demand-driven funding less expensive for both the government and students.

Research conducted for a Grattan Institute report last year on dropping out suggests that census date reforms could save money. This is the date, usually about four weeks into semester, before which students can drop subjects without paying for them. If students drop subjects, the government avoids paying the subject’s commonwealth contribution or lending students money through HELP.

A Grattan student survey found substantial census date ignorance. Many students did not know what it was or confused it with other university dates. One in 10 students in the survey said they had missed their chance to drop a subject. Seven per cent of commencing undergraduates fail all their first-semester subjects, possibly because they stopped studying. When students don’t understand the census date’s fin­ancial implications, they disengage from subjects with formally ending their enrolment.

A simple name change to highlight the census date’s meaning for students, such as payment date, would help reduce unwanted enrolments and unnecessary expenditure by the government and students.

Some universities already encourage students to focus on the census date. But more could be done before the census date and at the end of semester to reduce the number of students who are disengaged or have no realistic chance of passing. Non-university higher education providers are already legally required to check that their students are reasonably engaged in their studies.

Universities are always disappointed by reduced public funding. But that is likely for the next three years in any case. The plausible choice now is not between the Coalition’s policy and Labor’s more financially generous restoration of demand-driven funding but between different policies that the Coalition can live with.

For a similar total amount of public funding, we can have current policy that freezes the system in 2017 or new policies that let universities respond to local population growth, adjust their disci­pline mix to student preferences and labour market needs, while giving disengaged students more protection than they now have.

For the Coalition, this policy would introduce some budget uncertainty, especially from the mid-2020s. But a shortage of student places at university would hit families whose votes they need at future elections. Based on 2016 Census figures, more than half of the children then aged between five and 12 who will reach university age in the 2020s live in seats the Coalition won on May 18.

Both politics and policy favour a return to demand-driven university funding. 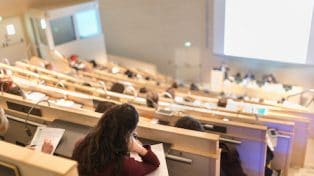