Australian governments can choose to slow the spread of coronavirus, but they would need to act immediately - Grattan Institute

Australian governments can choose to slow the spread of coronavirus, but they would need to act immediately

Australia had 6,415 confirmed cases of COVID-19 as at 14 April, according to Johns Hopkins. The blog post below was published on 10 March, when the number of confirmed COVID-19 cases in Australia first passed 100.

Australia currently has 100 diagnosed cases of coronavirus, as of 10 March. Countries that have hit the 100 case threshold fall into two camps: those that saw rapid spread of the disease (China, Italy and Iran), and those with a managed case load (Japan, Singapore and Hong Kong). Australia would need to act as soon as possible to ensure we join the latter camp.

It took Italy around two weeks to go from having fewer than 100 diagnosed cases of coronavirus to having nearly 10,000 cases. The health system in the richest part of Italy is now struggling to cope with the load. The terrifying maths of exponential growth can see pandemics spread very, very fast. The rate at which the virus spread in Italy is not an outlier – it spread at a startlingly similar pace in Iran, South Korea, and China.

A range of other countries now look to be treading a similar path. Cases in the US are rising rapidly, even though there are reports that fewer people are being tested than may be warranted, suppressing the actual number of cases. In the UK, too, the number of confirmed cases is ten times higher than it was a week ago. Spain and Germany have followed a similar trajectory. 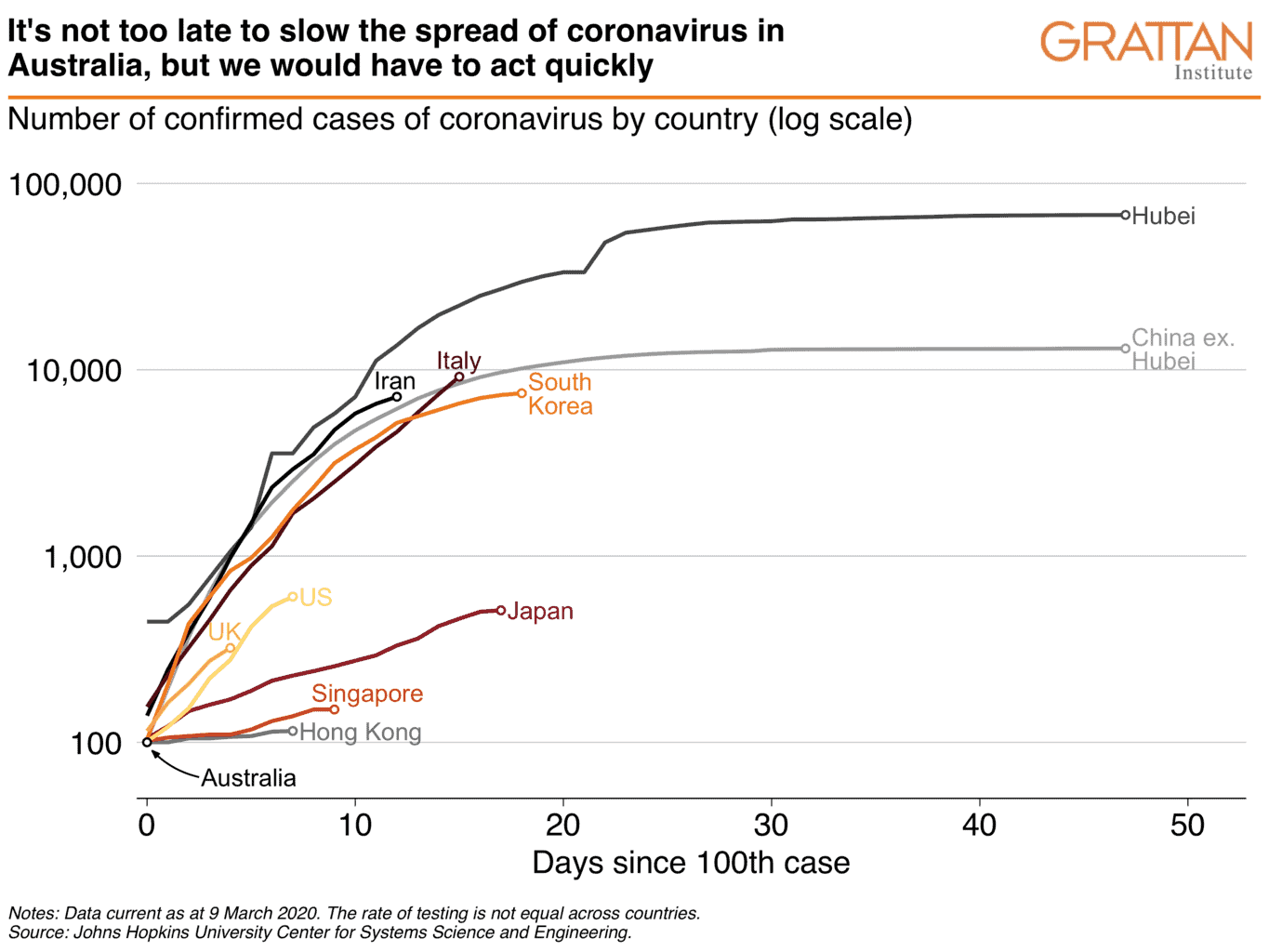 Not everywhere has experienced a week-on-week doubling of coronavirus cases. Singapore and Hong Kong, in particular, have gone down a different path, as did  China and South Korea after their initial outbreaks. These countries have introduced widespread social distancing measures including the closure of schools, universities, childcare centres, public gatherings.

These aggressive efforts to prevent the spread of the virus have not been pretty – and they’ve come at a real economic cost to many households and businesses – but they appear to have been successful.

Australia had only 39 confirmed cases a week ago. The number of cases is more than doubling every week. Further spread in Australia is now inevitable, as health authorities acknowledge. Australia can slow or stop the spread of the virus now by adopting social distancing measures that will have a real economic cost. One alternative is to adopt social distancing measures later with an even higher economic cost. The other alternative is to let the virus run its course, which will probably have a very high human cost in shortened lives, particularly of the elderly, and carries the risk of significant social break-down.

Note: Data in this post were sourced from Johns Hopkins University researchers. The researchers are regularly updating their data from national sources and the WHO and making the data available for download.