Australia’s coal and gas exports in a net-zero future

Published in Pearls and Irritations, 31 May 2021

The International Energy Agency (IEA) issued a report recently on how the world can achieve net-zero energy emissions by 2050. It was worrying news for Australia’s gas exports, and worse for our coal exports.

Achieving net-zero emissions by 2050 is generally accepted as necessary for limiting global warming to 1.5ºC above pre-Industrial levels. As a signatory to the Paris Agreement, Australia is committed to limiting warming to well below 2ºC and pursuing efforts to limit the increase to 1.5ºC.

The IEA is the world’s foremost energy advisory body. Its goal is to shape a secure and sustainable energy future for all, and its members are predominately OECD nations including Australia. Among institutions and companies that regularly forecast future energy scenarios, it is considered one of the more conservative.

The consequences of such a finding are dramatic for an energy exporter such as Australia. Coal and gas were our two largest exports after iron ore in 2019-20. But that will all be upended if the IEA’s net-zero scenario is realised.

The IEA’s scenario specifically analyses Australia’s liquefied natural gas (LNG) export prospects, finding that they could plunge by more than two-thirds by 2040, after a massive increase in the past decade.

Our LNG exports may not fall all the way to zero – there are some markets with high-value uses for gas even in the 2040s and ’50s where users would prefer to pay to offset the emissions than switch to another energy source. But the IEA does expect Australia to lose market share to regions with lower-cost and lower-emissions gas resources, such as Russia and the Middle East.

The story could be worse for coal.

Although it does not provide Australia-specific estimates, the IEA calculates that the global coal market would essentially collapse, shrinking by more than half each decade. And that’s assuming a significant uptake of “carbon capture, utilisation, and storage” (CCUS) – the IEA assumes 80 per cent of the remaining coal demand will be used in facilities equipped with CCUS by 2050. 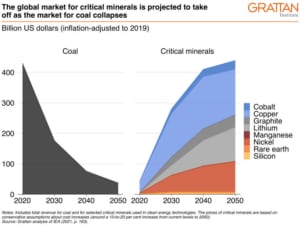 The good news is that a global transition to net-zero would also stimulate demand for critical minerals such as copper, lithium, and nickel. These minerals are essential for low-emissions technologies such as batteries, and Australia has globally significant reserves it can mine.

Australia’s Office of the Chief Economist estimates that the export value of these three minerals will exceed thermal coal by 2025-26.

Of course, the IEA can’t predict the future. The IEA’s managing director, Fatih Birol, acknowledges that the report illustrates “a pathway to net-zero by 2050”, rather than a “binding prescription”. And the IEA has got its forecasts badly wrong before – most notoriously on solar PV – although more often because it was too conservative rather than too bullish.

Australian policymakers might disagree with the prognosis for our coal and gas exports, but they must be prepared to explain why: why would Australia’s exports be more resilient, and why would our competitors do worse than the IEA expects?

A more prudent approach would be to accept that a global transition to net-zero emissions will seriously curtail Australia’s fossil fuel exports, regardless of our domestic climate policies and political preferences. The fate of our gas and coal exports will ultimately be decided in Tokyo, Beijing, Seoul, and New Delhi – not in Canberra. As these governments increasingly commit to net-zero targets, the IEA’s path looks more and more credible.

[1] Unless the plant’s emissions are captured and permanently stored – a process known as carbon capture and storage (CCS). This process significantly increases the cost of building a power station.