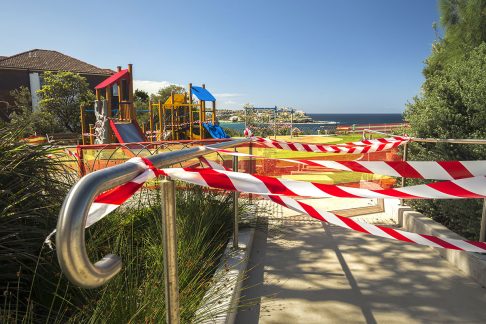 Australia’s endgame must be total elimination of COVID-19

by John Daley and Stephen Duckett

Six weeks into the COVID-19 crisis, Australian governments are still hedging about which endgame they’re playing for. That’s understandable – uncertainties abound, and the stakes couldn’t be higher.

The least-bad endgame is to eliminate the virus from Australia, continue to control our borders until there is a vaccine or a cure, and restore domestic economic and social activity to “normal”, albeit keeping a close watch for new cases.

The outcomes of this endgame would be much better than the alternatives. Obviously, fewer Australians would be infected. And the economic costs would be much lower because much more economic and social activity could go back to normal within a few months, whereas under the alternatives many activities would remain curtailed until there is a vaccine or a cure – or we lose patience and accept a lot more deaths.

The leading alternative to an elimination strategy is to hold infection rates at close to one – that is, so each infected person on average infects only one other. It’s the “Goldilocks strategy” – it requires us to calibrate social distancing measures with precision. Too tight, and we inflict extra economic damage for a long time. A little too loose, and infections would again grow exponentially – which can seem manageable for several weeks, until suddenly it isn’t.

Under the Goldilocks strategy, we could afford to relax at least some restrictions. But events where one person can infect many others would probably remain out of bounds – such as live sport and entertainment, large parties, religious services (at least those that have large congregations), eating out, and socialising at the beach. Domestic tourism would probably also be out, because tourists can spread the virus from area to area. There’s a good chance that many workplaces and university classes would have to stay closed. And a number of activities would have to remain in the “wait-and-see” category, such as schools, domestic air travel, general community socialising, and non-essential retail, except in their current alternative online forms.

Whatever is required to keep infection rates close to one would need to remain in place until there is a cure or a vaccine – and that probably means for as long as 18 months, assuming either happens.

That’s a long time to be living a severely restricted life. It is also economically very unattractive. Even for activities that are permitted, businesses would know that if infection rates drift up, they may be shut again. This is unlikely to breed the confidence that is essential to business investment. And most of the businesses that are shuttered for so long are unlikely to restart – imposing big longer-term economic costs.

A strategy of eliminating the virus from Australia seems much more attractive. The current level of restrictions might well be sufficient – they are probably resulting in fewer new cases each day – but they would have to remain in place a month or two longer – because getting from 10 new cases a day to 0 is vital to the strategy. But we could then look forward to a lengthy period of relatively normal social life, business activity, domestic education, retail activity, domestic tourism, sport, and entertainment. One doesn’t need a complex model of Australia’s economy to see that an extra month or two of tighter the current restrictions would be worth the wait.

So why are Australian leaders not aiming for elimination – as China has done, and New Zealand is doing?

First, we don’t know exactly how long it will take to get to zero. Stamping out the last few cases can be hard, and is partly a matter of luck – a single person can infect five others, and set efforts back by weeks. Mathematicians in New Zealand have estimated there is a 50 per cent chance that their current restrictions will eliminate the virus in 90 days from lockdown (about 11 weeks from now), and their estimates are consistent with modelling from the universities of Sydney and Melbourne. The good news is that actual experience in New Zealand and Australia over the past few weeks seems consistent with these models.

But even if it proves impossible to stamp out the virus, the additional few weeks of current restrictions would leave Australia better set up for a Goldilocks scenario, which is much easier to execute if a country starts with 10 new cases a day rather than 100. And whether it is because we moved early, our culture of compliance, or clean air, it looks like infections are falling faster in Australia than in almost any other country.

Second, there is a risk that we declare victory too early, unidentified infections persist, and an outbreak gathers steam before it is identified, forcing us to reimpose widespread restrictions. We would be back to square one, with politicians taking the blame.

These fears are fed by observing Singapore and Hong Kong, which have both increased restrictions in the past few days as their strategy of “tracking and tracing” every case proves insufficient to keep the epidemic under control. But these countries never eliminated the virus in the first place, and for a long time their borders remained relatively open: infection levels persisted in both countries. And the more infections there are to track and trace, the harder it is to do so.

History is a poor guide to this risk. While there were second and third waves to the Spanish flu epidemic, that was a world in which borders remained relatively open. And coronaviruses tend not to mutate as rapidly as the flu virus, whose changing shape means that someone infected in a previous wave may well not be immune to a subsequent wave.

This risk of resurgence can also be minimised by relaxing restrictions gradually. An undetected infection is unlikely to pass through an unbroken chain of asymptomatic carriers: sooner rather than later it will infect someone who does show symptoms. If we relax restrictions gradually, then a re-infection is unlikely to gather steam. And the longer we live in a country with no infections, the more sure we can be that there are none to find.

Third, an elimination strategy implies very tight controls over international passenger traffic until there is a cure or a vaccine. If COVID-19 persists in the rest of the world – and most countries today have a lot more infections than Australia – then an infected person who comes to Australia and slips through the net would probably set off a significant epidemic if most social restrictions had been relaxed. Australia can only pursue an elimination strategy if it persists with mandatory quarantine and testing of every inbound passenger.

This implies that until there is a cure or a vaccine, there will be minimal international tourism, fewer international students, and few migrants. Of course, we are in this world already. Most countries have imposed strict border controls. International air travel has slowed to a trickle.

We might well impose fewer restrictions on passengers from countries that also successfully eliminate the virus – not immaterial given that in 2019 about 28 per cent of Australia’s international students and 14 per cent of our international tourists came from China. And indeed, more people might come from China if other potential destinations still had many COVID-19 cases.

Perhaps the most widespread – and insidious – objection to the strategy of elimination is to assume it is impossible. Many early epidemiologists’ models, such as those from Imperial College London, assumed that an epidemic will recur in Australia if it persists in the rest of the world. Based on history, such models assume that borders will remain relatively open to passenger traffic, and that re-infection is inevitable. But we no longer live in this world. More countries have borders shut more tightly than perhaps any time in human history. What seemed unthinkable when we celebrated the beginning of 2020 has become an international norm within three months.

In any case, now that we can see what’s at stake, closing borders seems obvious. The joys and economic benefits of international passenger traffic are far outweighed by the costs of re-infection in lives, social activity, and economic productivity. Collectively, international tourism and higher education contribute 4 per cent to the Australian economy, much less than the 20 per cent of economic activity currently at a standstill.

Regardless of whether we pursue an elimination strategy or a Goldilocks strategy, we should test as widely as we can and build the most effective tracking system we can – because either strategy is likely to be more effective with them. And the costs involved are minimal relative to the costs to Australia’s social and economic life of imposing further restrictions if infections grow unchecked.

And there are intelligent ways to pursue an elimination strategy. We should start with an Australian state that has already reached no infections, and has tight controls over its borders – most likely to be South Australia, Western Australia, or Tasmania. If it works, that would gives us more confidence to broaden the strategy to other states and territories. If it doesn’t work, we could learn how to do better.

The only alternative is to let the epidemic spread sufficiently slowly that it doesn’t overwhelm the health system, but widely enough through the population that we eventually achieve so-called herd immunity. Under this strategy, substantial restrictions would need to remain in place – similar to those in the Goldilocks scenario – so that the infection rates didn’t grow once we approached the limits of the health system to cope. We would need to keep these restrictions in place for about a year, about 15 million Australians would be infected, and there would be thousands of extra deaths – many more if we failed to insulate older people effectively from the disease.

It mightn’t take so long if there are in fact many asymptomatic people – although a recent random sample of Austrians showed otherwise. We wouldn’t need to close international borders – if anyone wants to travel. But the economic costs would be very high: many businesses that can survive a three-month suspension would not survive a 12-month closure. And if we pursued the herd-immunity strategy we would be making two big assumptions that can’t be tested in advance: that once infected with COVID-19 you cannot be infected again; and that there are few long-term health effects from infection.

Pursuing a strategy of elimination will require patience. Already some business leaders are calling for restrictions to be relaxed sooner rather than later. Ironically, one of the primary attractions of the elimination strategy is that more restrictions could be relaxed earlier in the long-run.

Other countries don’t have Australia’s choices, and will have to pursue a Goldilocks strategy. Almost all developed countries will avoid a herd-immunity strategy because the political costs of pictures of mass graves are untenable. But most will be unable to pursue an elimination strategy because they have relatively porous borders, and there is no guarantee that their neighbours will also eliminate the virus. The collective action problems already look insuperable in both the United States and Europe. Under all realistic scenarios, substantial restrictions on social and economic life will be with us for at least 18 months.

For Australia, an elimination strategy carries substantial risks. But it is a lot more attractive than the alternatives. Worst case: restrictions remain in place for a little longer than necessary, and we end up resigning ourselves to the Goldilocks strategy. Best case: we can shake hands on a job well-done in four months’ time. It’s at least worth a shot.