The report presents a depressingly familiar picture: one in every 30 or so patents wait more than a year for elective procedures; one in ten wait more than eight months.

Published at The Conversation, Wednesday 25 June

The new AIHW report confirms both “known knowns” and “known unknowns”, as Donald Rumsfeld once distinguished.

Health costs are rising as a percentage of GDP – over the last decade increasing at 5.4% per year compared to annual GDP growth of around 3.1%. But only Dickensian characters and the occasional politician focus entirely on costs, ignoring value or benefits for increased spending. 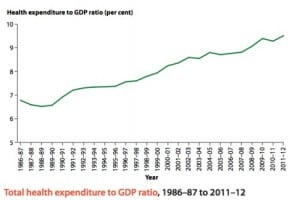 The report highlights that cost increases are significantly driven by new technologies – drugs and machines that lead to improved diagnoses and improved outcomes. Community expectations are also increasing, both in terms of expectations about the ability of technology to address health problems and access to those technologies.

The Report, though, lists some important gaps in data collation:

there is a lack of information generally on the outcomes of health care in Australia, and limited information is collected on safety and quality, efficiency and cost-effectiveness.

The report also presents government health expenditure data in a new way, comparing the ratio of spending to receipts. After a decade of stability where government health spending was around a fifth of government revenues, the health share increased to more than one quarter. 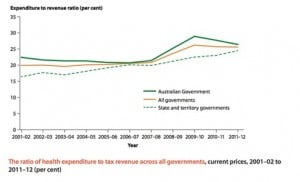 Importantly, the AIHW report highlights that this is a revenue side issue – the share increased because of a GFC-induced fall in revenues. With improved economic health, the ratio is now falling back towards a more comfortable position, at least for the Commonwealth.

The trend line for the states isn’t changing, showing a continued increase in the ratio of health spending to state revenues. This makes their squeals of pain following the 2014 commonwealth budget cuts to the states even more understandable.

The report shows bulk billing is highly variable, residents of the ACT have to use a microscope to find a bulk-billing doctor (about 55% of services bulk billed) compared to much better access across the border in NSW (87%). 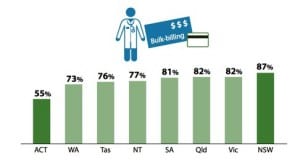 Finally, on access, the report presents a depressingly familiar picture: one in every 30 or so patents wait more than a year for elective procedures; one in ten wait more than eight months.