Budget 2019: the pattern of transport spending is unusual

Published at The Conversation, Wednesday 3 April

The budget just before an election seems to have a special quality: the transport infrastructure will surely be more plentiful than usual, and carefully chosen to shore up the electoral bulwarks. But don’t get too excited: this year the rhetoric may be big, but the scale of the numbers is nothing unusual. What is different is the pattern of spending over the budget’s four-year forward estimates.

The budget estimates a transport spend of A$7.4 billion for the coming year, 2019-20, and $33 billion over the forward estimates period. The 2019-20 expenditure estimate amounts to 0.37% of GDP – comparable to what we’ve seen in recent years. In fact, governments have spent between 0.26% and 0.53% of GDP under Treasurers Morrison, Hockey and Swan, and Treasurer Frydenberg is no different.

What’s particularly interesting about this budget, though, is that the treasurer is chancing his arm on the medium term. 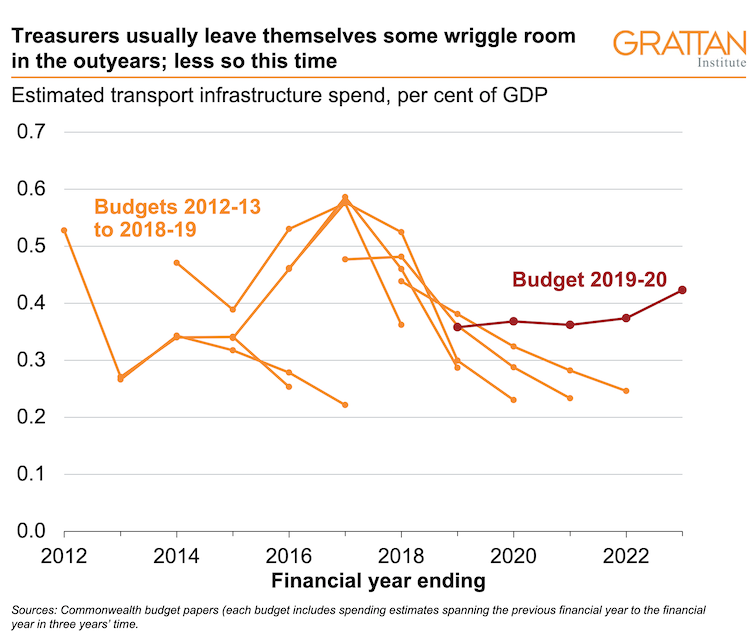 Usually treasurers leave themselves some wriggle room in the outyears. They can always spend more if the cash is available, and invariably they do. Plus, it gets easier to estimate what will be spent as the time of spending draws closer.

Of course, these days much of the promised spending is further into the future than the forward estimates. The government is touting a $100 billion, ten-year Infrastructure Investment Pipeline. There’s money all over the country.

Where does the money go?

Victoria gets particularly big-ticket items in this budget, totalling $6.2 billion, and somewhat more of it within the next four years than other states. In New South Wales, the longer-term package totals $7.3 billion, including $3.5 billion for the Western Sydney north-south rail link as well as a $1.6 billion upgrade to the M1 Pacific Motorway extension to Raymond Terrace.

But if you look at what’s happening within the next four years, a notable larger item is a road safety package, totalling $400 million over four years. The longer-term goal is for this package to cost $2.2 billion.

Some of the other longer-term spending is squarely focused on rural and regional areas. This includes a billion to improve the Princes Highway in NSW, Victoria and SA.

If it all comes to pass, there’s something here for everyone.