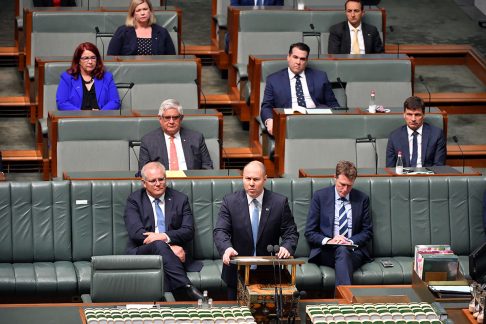 The Morrison Government’s recovery budget is a single-year plan that bets the house on a private sector led recovery.

The centrepieces of the plan – a $26bn scheme for the immediate expensing of all new business capital expenditure and a $4bn, one-year wage subsidy scheme for unemployed young people – create incentives for business to invest and employ.

But will it be enough? The major brake on investment has always been weak consumer demand, and there’s not much chance of this firing with real wage growth forecast to flatline for another four years.

In the next year, consumer spending will be helped by $13bn of cleverly front-ended personal income tax cuts. But beyond that it’s crickets – there is almost nothing left in the way of economic support by 2022-23. Quick wins such as raising the rate of jobseeker – every dollar of which would be spent immediately – have been overlooked.

Direct job creation is critical given very weak labour markets, but they’ve missed the target. It’s hard-hat heavy, and the biggest initiative is $10bn for major road projects. That pipeline was already flowing well, so it’s a strange choice for stimulus.

The job-creating power of government services is almost entirely ignored. Major investments in aged care, childcare, or education would be a jobs boon and could have provided a different route to recovery. And the budget is a missed opportunity to support the housing construction sector by ramping up social housing spending.

The chips have been placed. I hope it’s enough to release the missing animal spirits of the private sector because we aren’t well hedged.