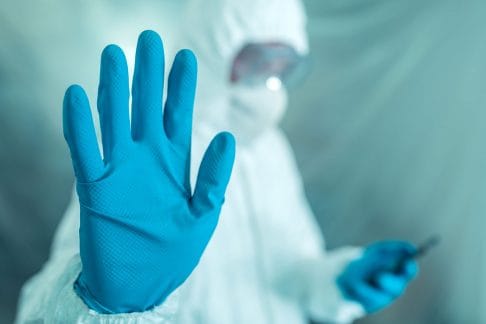 COVID-19: There are only two options from here. One is more deadly

Until there is a coronavirus vaccine, there is no exit strategy, only hard choices.

The Australian government must be clear about which strategy it is following – either we accept that the virus will remain at large in the community, flaring up occasionally, or we aim to eliminate it in Australia altogether.

The virus is here to stay, so this approach effectively accepts that many millions of Australians will become infected by the virus – just at a slower rate and over a longer period of time than if we “let it rip”.

The “flatten the curve” approach is actually a “herd immunity” strategy. For Australia to achieve herd immunity, the virus would have to infect about 60 per cent of the population – about 15 million Australians.

Advocates of this approach would have us lift restrictions when daily new cases are still in double digits. This risks a second wave of infections and a yo-yo approach to restrictions: relax them when numbers fall, then reimpose them as numbers rise, then relax, then reimpose, and so on until we achieve herd immunity.

And for the herd immunity strategy to work, the ‘right people’ need to be infected with the coronavirus at the ‘right time’.

The flattening the curve approach controls the ‘right time’ because it spreads out new cases over a longer period, so that intensive care units are not overwhelmed by a surge of infected people requiring simultaneous treatment.

As for the “right people”, the flattening the curve approach accepts that many will die. Most of them will be over the age of 50, but not all – young people with compromised immune systems would also be at risk.

Grattan Institute calculates that about 10,000 to 15,000 Australians would have foreshortened lives under this strategy. But the health system would manage; none would be excluded from an intensive care unit at the end of their lives.

The impact on the economy would be severe and sustained. People’s movements may have to be be tightly controlled for as long as 12 months – long after the government’s six-month JobSeeker and JobKeeper payments end.

Australia should explicitly reject a herd immunity strategy. Fortunately, we have another option. Australia now has a chance to effectively eliminate the novel coronavirus, and this should be the explicit goal of the federal, state and territory governments.

The number of new daily cases in Australia has been decreasing for a fortnight. Our forced quarantine of all international arrivals is doing its job. New cases from overseas – the main source of COVID-19 cases in Australia – are starting to peter out.

The numbers of new locally transmitted cases is also decreasing. We won’t know for sure until testing is greatly expanded, but the number of cases in the community looks to be in control.

Given this, state and territory governments should maintain harsh lockdown restrictions until new cases are effectively down to zero or close to it. Practically, this could be defined by a threshold of daily new cases below five (on average) for five days.

At this point, the government’s contact tracing systems would be able to contain outbreaks. Broad testing and monitoring would continue, with new cases quickly identified and their contacts quarantined.

Some states – such as South Australia and Western Australia – could hit this threshold in a couple of weeks. Then they could start to slowly lift their restrictions.

The federal government should maintain tight border control, with enforced quarantine, for as long as it takes until a vaccine is found.

Australia has a chance to effectively eliminate COVID-19. If we succeed, we will all be better off. Policymakers must not give up this opportunity in a grab for short-term popularity occasioned by an early announcement of lifting restrictions.

Governments need to articulate a goal, and a clear threshold for when restrictions will be lifted. Australians need to know the why and the when, to maintain their commitment to and acceptance of the irksome restrictions on our daily lives.