Published at The Conversation, Wednesday 18 March

In recent years higher education enrolments have surged. This is triggering many policy issues. It has contributed to government budget concerns. Labor is worried about completion rates and skills mismatches.

The scale of growth in government-funded places can be seen in the chart below. After a boost to student numbers following the introduction of HECS in 1989, enrolments grew only gradually until rapid increases from 2008. The enrolment boom trigger was the removal, by Labor over 2010-2012, of previous controls on government-supported bachelor degree places in public universities. This is known as demand driven funding. 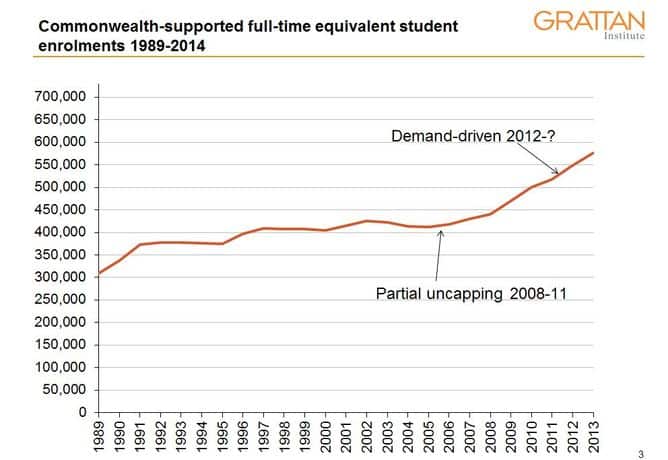 Unsurprisingly, government spending on tuition subsidies has increased significantly. They are up 40% in the five years to 2014. It was this growth that prompted the previous Labor government to announce an “efficiency dividend” cut to government spending. In her autobiography, Julia Gillard argued that this was preferable to putting back government controls on student numbers.

Following the recommendations of a report I wrote with David Kemp on Labor’s demand driven funding system, the government decided to keep and extend it. From 2016, it proposed including students at TAFEs and private colleges in the demand driven system. This means that these students would no longer have to pay full fees.

Although this reform is desirable higher education policy, it is expensive in a time of tight public finances. The 2014-15 budget papers predicted that full-time equivalent government-supported places would exceed 700,000 by 2017-18, up by more than 100,000 on 2013.

To finance this and make a contribution to overall deficit reduction, the government decided to cut average per student tuition subsidies by 20%. This proposal has now been deferred to a later time.

With the defeat of the remainder of Christopher Pyne’s higher education reform bill, the budget numbers will not look as bad. If the demand driven system is not extended, the growth in subsidised student numbers will be much lower than originally anticipated.

There will still be increases in public university enrolments, but these have slowed. Between 2013 and 2014, there was a small decline in the number of university applicants. In the latest budget update, presumably in response to new university enrolment estimates, the government revised down by about 4,000 its forecast for 2014-15 student places.

The defeat of fee deregulation will also reduce predicted government spending. Fee deregulation saves money when it replaces tuition subsidies, as it would have with the proposed 20% cut. But beyond that it is an expense. This is because HELP loans have interest subsidies and because the budget papers predict that 23% of the money lent will not be repaid.

So overall the collapse of the broader Pyne reform agenda has reduced the chance that Labor’s original demand driven model will be deemed financially unsustainable. However, without some reduction in per student subsidies, I am not sure it is entirely safe. As under Labor as revealed in Gillard’s autobiography, there will be internal government pressure to deliver financial savings.

My view is that some cuts to tuition subsidies are fair overall. Measures that restrict access to Commonwealth-supported student places put all the financial cost of curtailing government spending on a relatively small number of people. These are the prospective students who miss out entirely on higher education, or are forced into full-fee places in private colleges and universities.

But with the Senate likely to obstruct reductions in per student subsidies, the government’s budget options are limited. If they are determined to save money, they have to use methods that do not require parliamentary approval.

To slow spending on the demand driven system, the Coalition could use university funding agreements. These are agreements that every university has to sign with the government before getting student funding. While these agreements cannot be used to reduce spending, they can freeze it from 2017. The budget papers show this was the government’s financial goal all along – to keep tuition subsidy spending stable.

If announced soon, this is likely to have effects before 2017. Universities would reduce commencing student numbers to avoid having “unfunded” enrolments in 2017. This would be explained as a pause of demand driven funding, not a repeal.

From Labor with Senator Kim Carr as the shadow minister, the challenge to the demand driven system is as much ideological as financial. Although denying that they would re-impose caps on student numbers, Labor is moving away from this Gillard legacy.

In a speech last week to the Universities Australia conference, Senator Carr argued that low completion rates for some groups of students and imbalances between supply and demand for some graduates justified more government intervention.

The current legal framework for higher education isn’t well designed for the micro-management this approach implies. But if there is a change in government then new rules, like the cruder funding freeze currently possible, may be used to reduce spending without cutting per student funding rates.

From my work on demand driven funding, I think it is not perfect but the best system we are likely to get. With modest cuts to per student tuition subsidies, it should be sustainable for the foreseeable future.