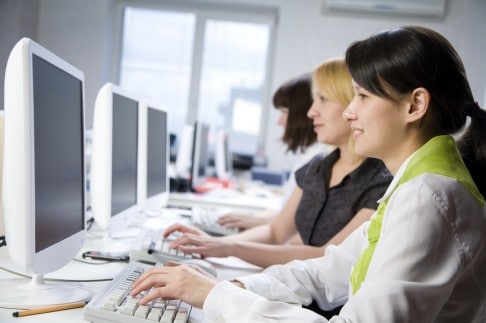 Published at The Conversation, Tuesday 9 June

In the six months since the Financial System Inquiry found Australia’s A$16 billion superannuation industry needed to improve efficiency, there’s been little willingness by the sector to admit to it.

Some industry leaders continue to argue that funds compete vigorously, so the outcome must be close to efficient, with little more than a few loose ends to be tied up.

A panel at the recent sustainable retirement incomes forum heard a more nuanced view. At least one panelist acknowledged that there were too many funds and too many accounts. (These add more than half a billion dollars a year to costs).

The view persists, however, that competition generates acceptable outcomes for most superannuation consumers. For example, University of Melbourne Professor Emeritus Bob Officer argues it doesn’t matter if most consumers do not understand what drives superannuation outcomes. The few customers who are clued in, he argues, drive sellers of comparable products to set comparable fees for everyone.

This “law of one price” can be observed, with limitations, in markets where traders buy and sell to exploit price differences between markets.

Those in the know

But the law of one price is “more honour’d in the breach than in the observance” in superannuation. Superannuation products that are materially identical sell across a two- or three-fold price range.

Unlike in a commodity market, sophisticated superannuation customers can’t profit from buying and selling mispriced products. If the most canny employers and account holders find or negotiate a great deal, the less attentive ones can be revealed as such and can end up paying more.

The problem is most acute in the so-called “choice” part of the market where customers buy superannuation through financial advisers, bank branches, or direct. Superficially different products sell over a broad range of fees. Even identical products are sold for very different fees – for example, across the ‘platforms’ used by financial advisers. There are tens of billions of dollars in ‘legacy’ or ‘closed’ products that are priced at double or triple the ‘going rate’.

There may be unmeasured product variation, but funds that rate highly for member services are less expensive than others.

The MySuper part of the market – all 10 or so million people and $400-plus billion dollars – is not much better.

Some get good deals. The bulk of the MySuper market is served by industry funds. For the most part, their fees are closer to what is achievable. But even here, smaller funds are usually materially more expensive (the figure below shows administration expenses and fees only), and even the larger funds are not as lean as they should be. 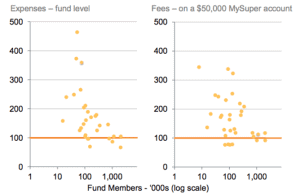 Public sector funds are typically better value (and have performed best as a group), though they are unavailable to the broader market.

Corporate funds operated for large firms by providers who also sell retail products prove the point. One large corporate obtains a 50% discount on an identical retail product, far more than would be accounted for by its low cost to serve. Even some small employers have discounts exceeding 35% compared to what others pay.

None of this is consistent with the “law of one price”.

This problem is not specific to Australia. One recent US study purports to show that the biggest cause of variation in outcomes across the employer-sponsored 401(k) retirement plans is fee variations. Even larger variations are found in the US in mutual funds, which are selected by individuals.

Because price-insensitive customers are so profitable, and because scale is so important to viability, funds incur excess costs in seeking to win and retain customers.

As a result, average costs have fallen only slowly even as the system has grown, and they remain far in excess of what is feasible. Default fees can and should be below 0.7% per year with no change to service or investment performance, not today’s 1 per cent or the 0.9+% they will be once current reforms are bedded down.

What does this mean for policymakers? The Murray inquiry and the government are rightly concerned about efficiency in the sector. But government needs to be realistic about how competition relates to efficiency. For example, moving to cut the link between industrial awards and defaults, as is Coalition policy, appears unlikely to be a game-changer for efficiency: it will put pressure on some inefficient industry funds, but it will also result in funds incurring higher selling, marketing, and member and employer engagement costs. The net result could even be an increase, not a decrease in average MySuper fees.

One option, then, is to strengthen the quality filter on superannuation products. APRA has already signalled that funds will have to demonstrate their MySuper members are not disadvantaged.

The Financial System Inquiry recommended that government design and run a tender to select default funds, unless the industry is shown to be much more efficient within a few years. There is no reason to wait. Where such tenders are run in Australia today, they apply effective competitive pressure: expenses have been low and net performance has been strong.

Beyond this, inducing funds to merge, helping account holders consolidate their super into a single account, and improving the comparability of superannuation products will be helpful.

Finally, in designing any retirement income default product, government should absorb lessons from the inefficiency in the accumulation phase.

Super fund executives may be right when they argue they are furiously competing, but that does not mean the industry is delivering efficient outcomes. Policymakers need to focus on the quality of competition, not its intensity.