Fewer retirees will own their home in future, and that has big implications for policy - Grattan Institute

Fewer retirees will own their home in future, and that has big implications for policy

Published at The Conversation, Friday 12 April

Australia’s retirement incomes system has been built on the assumption that most retirees would own their home outright. But new Grattan Institute modelling shows the share of over 65s who own their home will fall from 76% today to 57% by 2056 – and it’s likely that less than half of low-income retirees will own their homes in future, down from more than 70% today.

Home ownership provides retirees with big benefits: they have somewhere to live without paying rent, and they are insulated from rising housing costs. Retirees who have paid off their mortgage spend much less of their income on housing (on average 5%) than working homeowners or retired renters (25% to 30%). These benefits – which economists call imputed rents – are worth more than A$23,000 a year to the average household aged 65 or over, roughly as much again as the maximum pension.

You’ll be OK if you own

Our 2018 report Money in Retirement showed that while Australia’s retirement income system is working well for the vast majority of retirees, it’s at risk of failing those who rent. They are more than twice as likely as homeowners to suffer financial stress, as indicated by things such as skipping meals, or failing to pay bills.

This is not surprising – renters typically have lower incomes. But the rising deposit hurdle and greater mortgage burden risks means rates of home ownership are falling fast among the presently young and the poor. 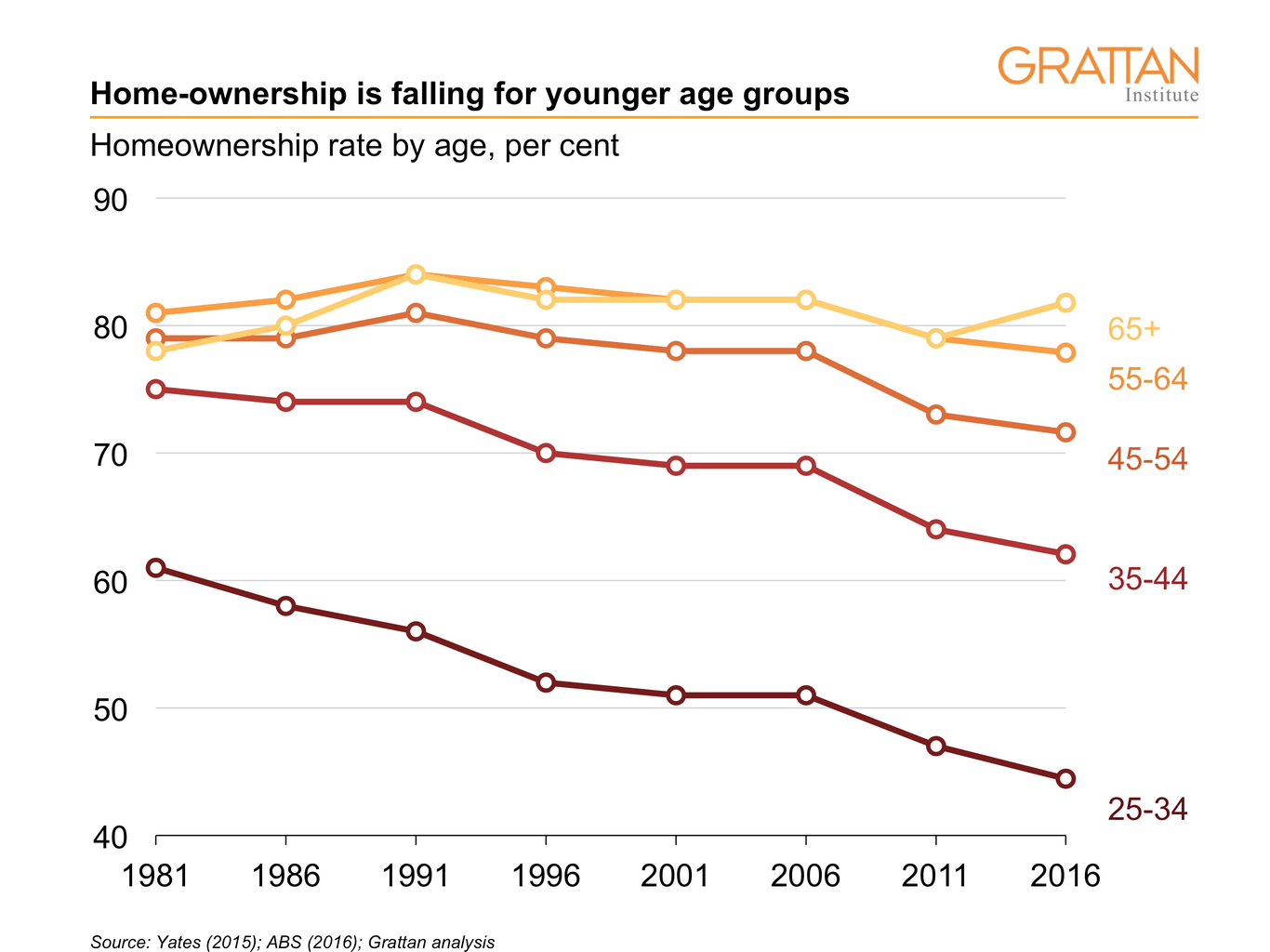 And home ownership now depends on income much more than in the past: among 25-34 year olds, home ownership among the poorest 20% has fallen from 63% to 23%. 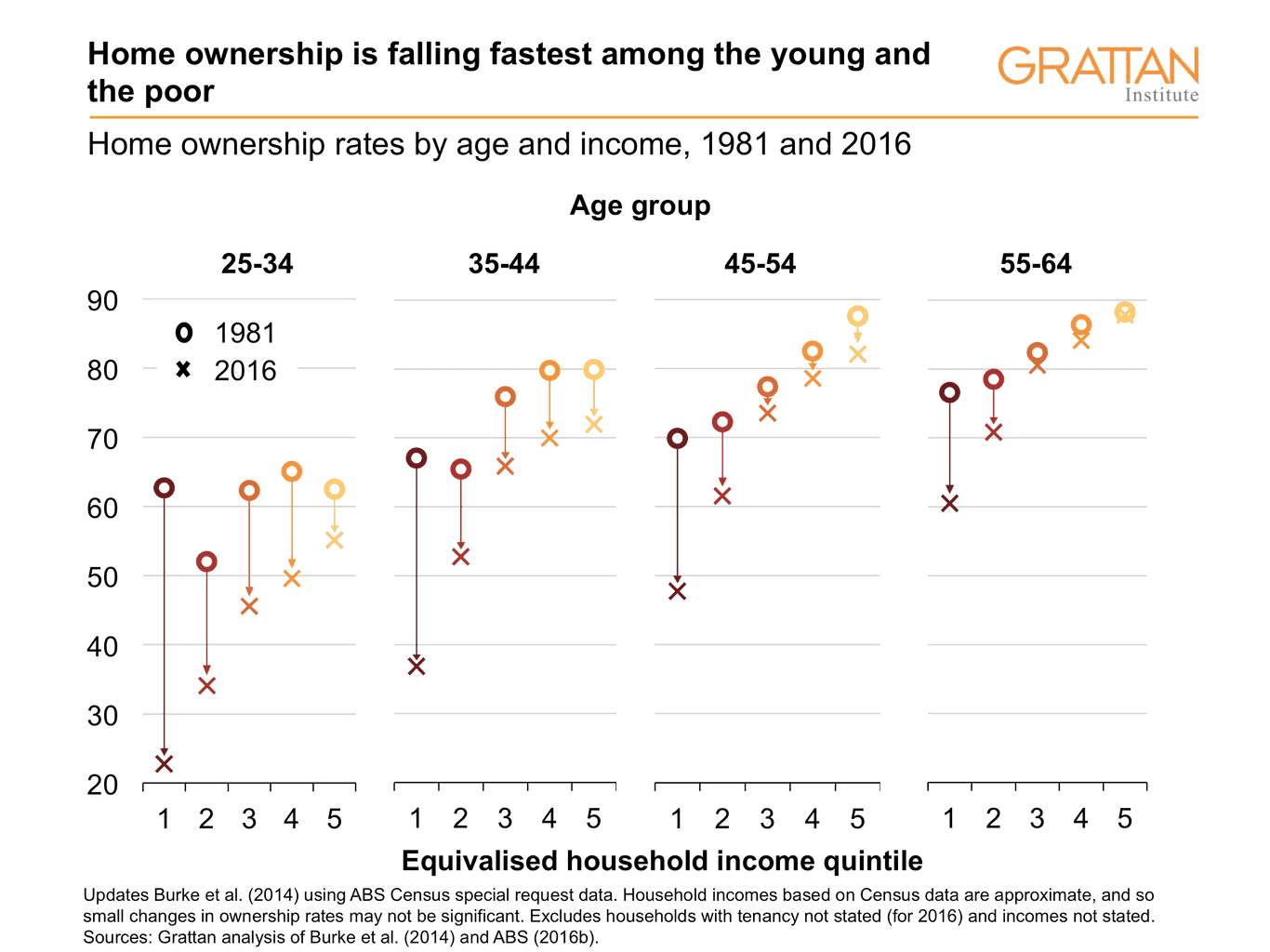 And while we don’t project home ownership rates for different income groups due to data limitations (we have the necessary Census data on home ownership rates by age and income only for 1981 and 2016), it is more than likely that less than half of low income retirees will own their homes in future, down from more than 70% today. 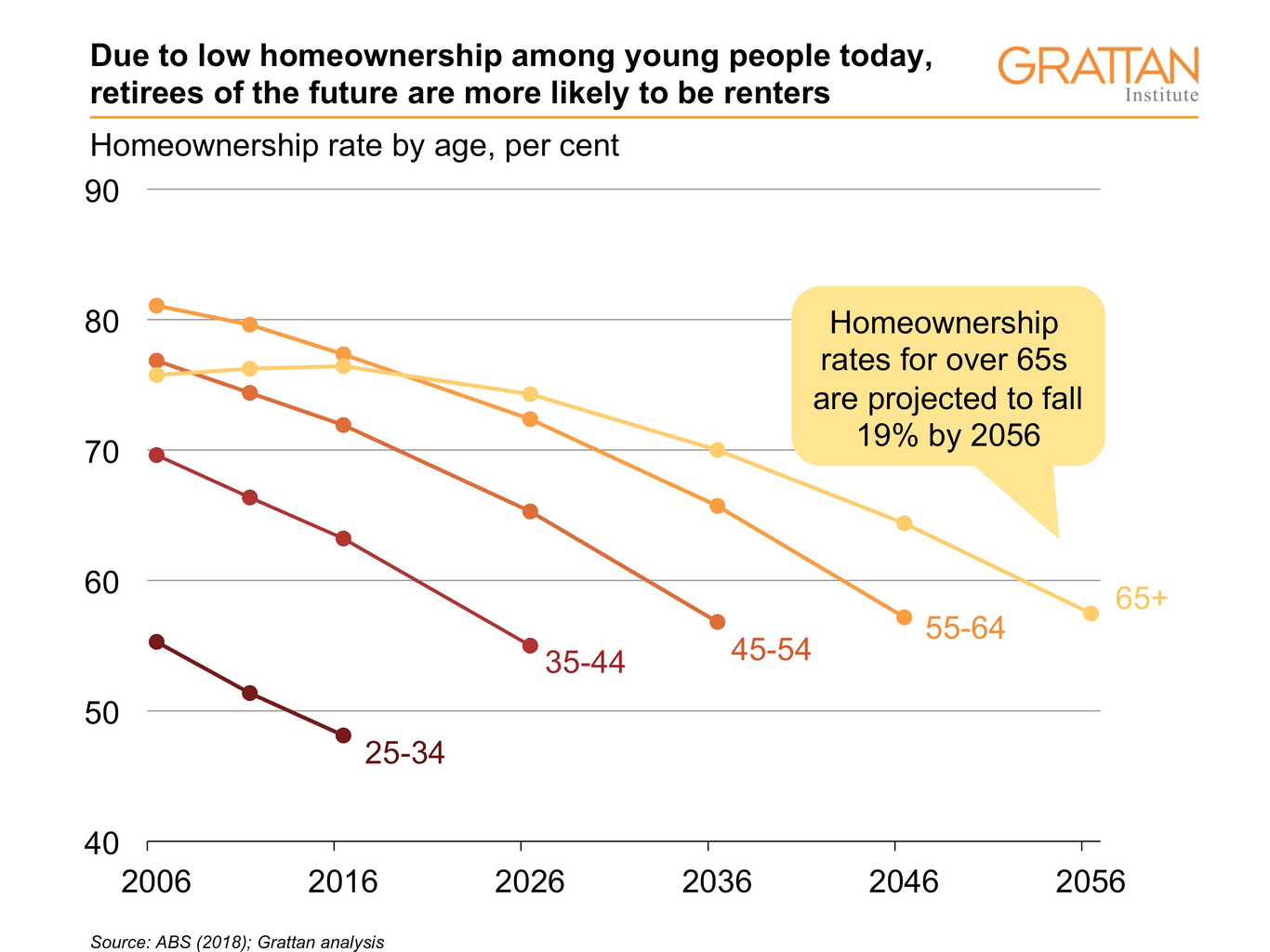 Worsening housing affordability means renting will become more widespread among retirees. As a result, more retirees will be at risk of poverty and financial stress, particularly if rent assistance does not keep pace with future increases in rents paid by low-income renters.

And rent assistance won’t much help

That’s why our Money in Retirement report recommended boosting Commonwealth Rent Assistance by 40%, at a cost of $300 million a year in today’s dollars. That would restore it to the buying power it had 15 years ago. It should be indexed in future to changes in the rents typically paid by the people who get it, so its value is maintained, as recommended by the Henry Tax Review.

But a retirees who rent will have much less for living on.

There will be ‘haves’ and more ‘have nots’

Among home-owners, an increasing proportion will be still paying off their mortgages when they retire – the proportion of 55 to 64 year olds who own their home outright fell from 72% in 1995-96 to 42% in 2015-16. Some will (quite rationally) use some or all of their super to pay off their mortgage.

And rising housing costs will in time force retirees to draw down on more of the value of their home to fund their retirement.

Currently, few retirees downsize or borrow against the equity of their home while continuing to live in it. But that will have to change.

Government policy should continue to encourage these retirees to draw down on the increasingly valuable equity of their homes to help fund their retirement. They are not the ones who will need government help. The government’s recent expansion of the Pension Loans Scheme that allows all retirees to borrow against the value of their homes is a step in that direction.

Retirement is going to change in the years ahead. Most retirees will be far from poor, many of them better able to support themselves than ever before. But an increasing number will not. They are the ones who will need our help.