How households save for retirement: a reply to Industry Super Australia

It’s an uncomfortable truth that superannuation is not the sole part of retirement incomes. Work we recently released shows that for many households non-super assets (not counting the family home) are as large as super assets.

Many in the superannuation industry found it heretical to imagine that they might not be at the centre of the retirement universe. Industry Super Australia accused us of “misleading analysis” that committed “statistical sins”. If they had read our material more carefully they would have noticed we did the precise opposite of what they claimed.

First, we were accused of averaging across high wealth and low wealth households; and across young and old households. But the analysis that informs our conclusions contains the gory detail of the distribution of non-super wealth for people of different ages and different income levels. This more detailed analysis supports our headline findings. Most households of any particular age and level of income hold more wealth on average outside super than inside super (not counting their home).

Then we were accused of including the asset value of family homes in our analysis. But our analysis carefully distinguishes between owner-occupied and investment property, and highlights the importance of non-super wealth excluding the family home. In any case, to understand overall resources in retirement, the value of homes matters a lot. A material number of renting retirees are under financial stress, which home-owning retirees almost never experience. It is true, as Industry Super points out, that many retirees are reluctant to sell their home to fund their retirement. But there is no reason why housing assets shouldn’t support living standards in retirement, as we and many others have argued.

In its critique, Industry Super goes on to present analysis suggesting that superannuation is a more important part of retirement savings than we claim.

Even this Industry Super analysis is selective. It only looks at 55 to 64 year olds – the one age group who have more of their non-home assets in super than other age groups do. Since the compulsory Super Guarantee was lower than it is today for most of this age group’s working life, older households would have made lower compulsory contributions than younger age groups do now. Yet this 55-64 age group tend to have made much larger voluntary contributions, because at their age they are not locking up their money for long.

Industry Super’s analysis also underplays how households pool the assets of their members. Many Australians are living with a spouse or partner, where the household expects to pool their resources to fund their retirement together. Yet Industry Super attributes assets only to individuals, not households. Since many assets are held in the name of only one person, this approach understates the assets that one member of a couple can access to fund their retirement.

Finally, the definition of non-housing wealth used by Industry Super excludes substantial components of household wealth – notably vehicles and household effects. Yet all these assets support living standards in retirement, either as a potential source of income, or by providing in-kind services to their owners (what economists call imputed rents). That’s why they are counted in the Age Pension assets test. Yet even when these components of household wealth are excluded many households report significant non-super assets.

To understand the significance of non-super wealth, it is more useful to look at all households, especially younger ones; to analyse households rather than individuals, because household analysis provides a more accurate picture of the resources available when one partner doesn’t work much; and to count all non-home wealth.

The analysis presented below shows that households of different ages and wealth levels hold substantial savings outside of superannuation. They might be in investment property, businesses and trusts, other financial assets such as shares and term deposits or other household wealth such as vehicles and personal effects.  It is true that for the least wealthy 20 per cent of households in each age group, super is invariably most of their non-home wealth. But in absolute terms, these super balances are small. At retirement, the Age Pension will inevitably dwarf them. Typically, these low-income households depend primarily on a full Age Pension for their retirement. 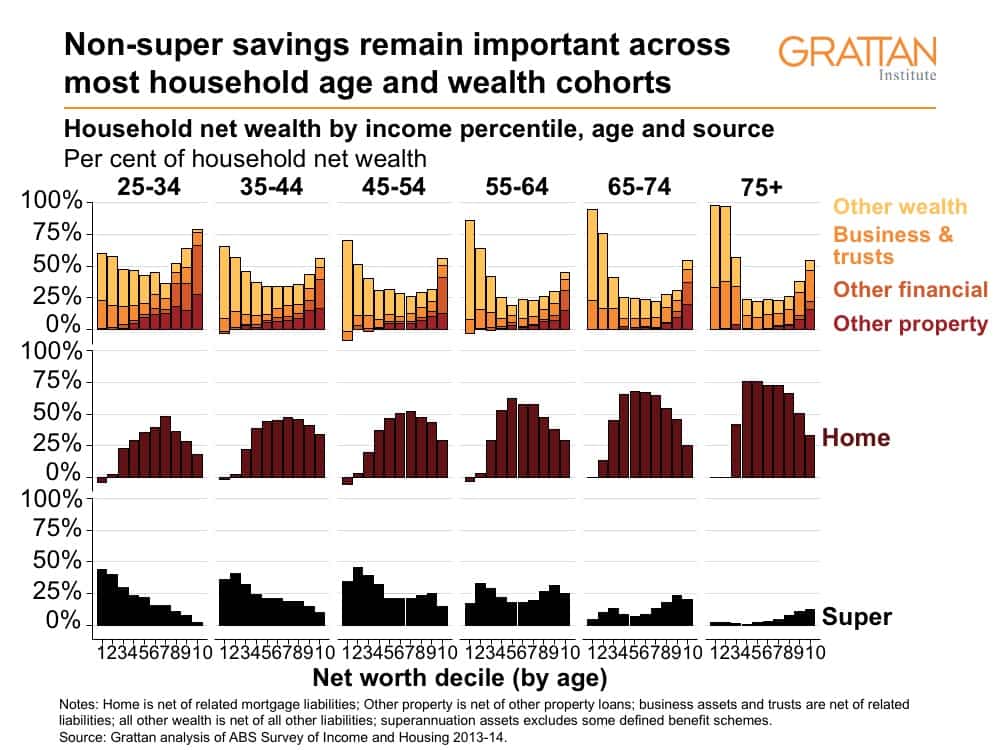 How many households have non-super wealth?

Another way to cut the data is to look not at the average wealth of particular age and income cohorts, but to ask what proportion of particular cohorts have particular levels of non-super wealth.

In doing this analysis, it’s important to focus on households rather than individuals so that secondary income earners with few assets apart from any super don’t obscure the real situation. The analysis presented below shows that more than half of households in each age group hold more than 50 per cent of their non-home wealth outside of super. 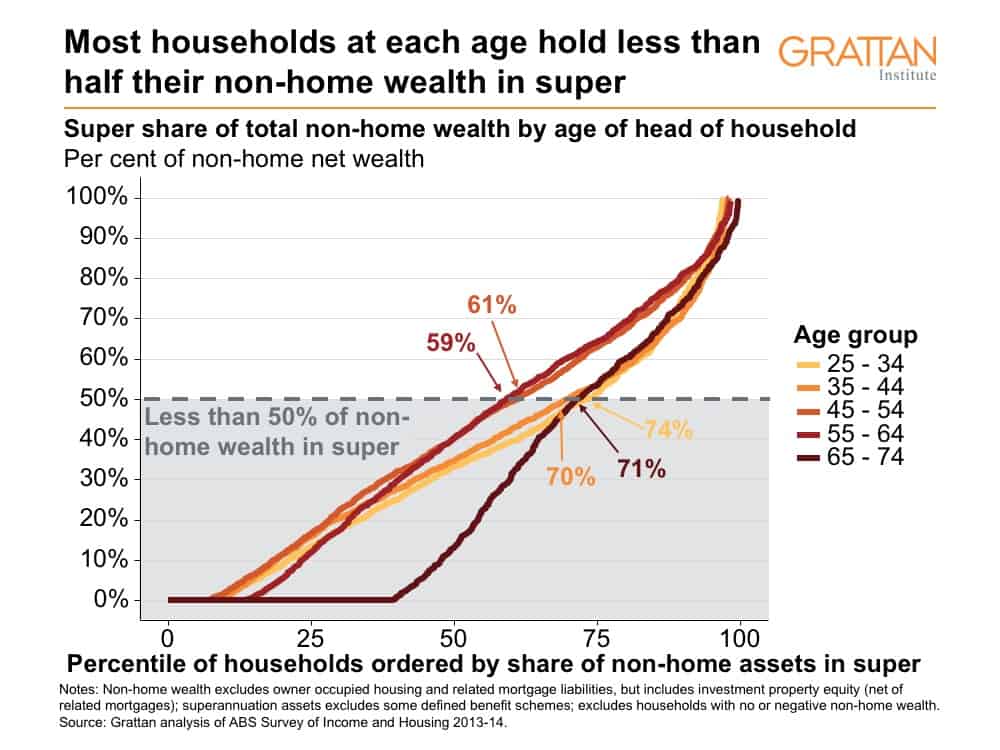 As Industry Super pointed out, there are differences between the self-employed and employees. An analysis of 45-54 year old households where at least one income earner is an employee households shows that 57 per cent hold at least half their non-home wealth outside of super. Since we are trying to understand retirement assets, it’s relevant that almost four-fifths of these households hold at least 20 per cent – a material portion – of their non-home wealth outside of super. 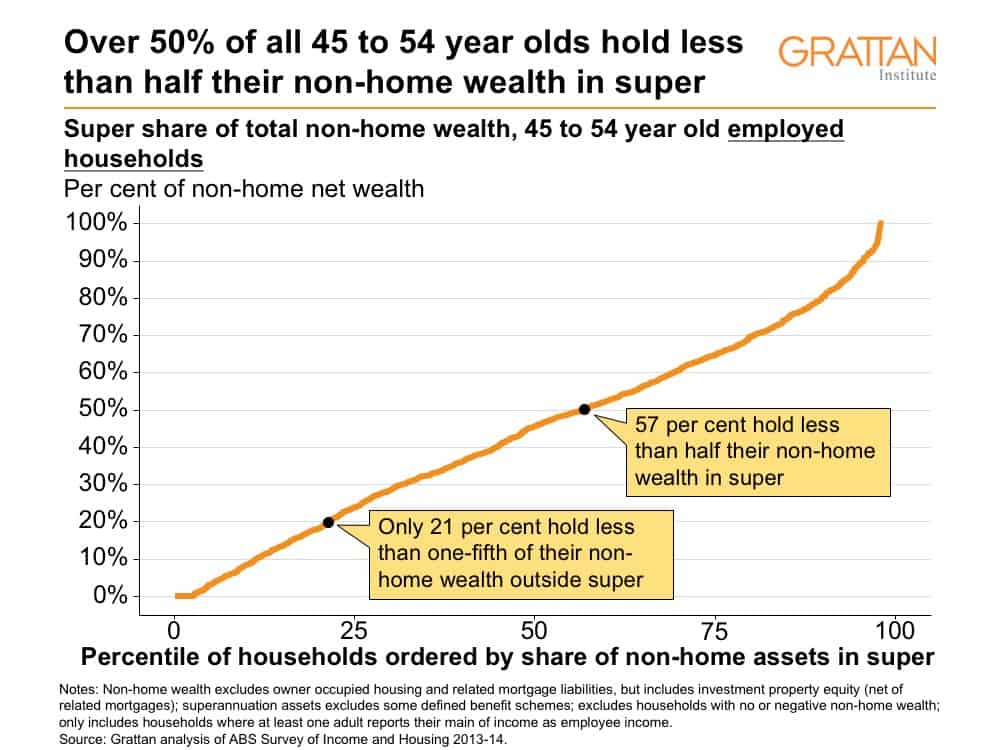 Why does this matter?

All of this might seem a wonkish argument about statistics. Yet it matters because arguments about compulsory super contributions, and about appropriate tax concessions for super, typically assume that income in retirement will come only from Age Pension and super.

For example, research recently undertaken for the Committee for Sustainable Retirement Incomes, referred to by Industry Super, made precisely this assumption. It ignored any retirement savings other than super. This is simply not true for most people, as our analysis here shows. And high-income and wealth households – those likely to run into limits on super tax concessions – are even more likely than other households to have large non-super wealth holdings.

Retirement income policy is a difficult and emotive topic. Those whose businesses depend on the size of super balances have a lot at stake. Understanding how people really save for retirement matters.

Inevitably, different households save for retirement in different ways. For many, superannuation will indeed be their dominant non-home asset, and the main contributor to a retirement income bigger than the Age Pension.

But there’s no free lunch when it comes to superannuation. Higher compulsory super contributions will increase retirement incomes. But they are ultimately funded by lower wages, which means lower living standards for workers today.

Balancing these interests is a difficult question for public policy.