School funding is a journey, not a destination - Grattan Institute

School funding is a journey, not a destination 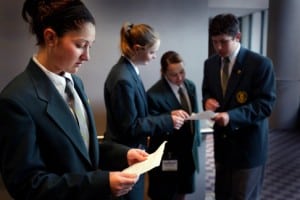 Eight weeks ago, the Senate passed the Australian Education Amendment Act 2017, widely known as Gonski 2.0. It was a bruising political battle with a range of unusual alliances.

I have described the outcome as a victory for children over politics. Not everyone is so sanguine. But rather than relitigate the details, it is worth examining where we are now in a broader context, because school funding is a journey, not a destination. There is no such thing as a perfect model. We should judge policy changes on whether they move us in the right direction, while always keeping an eye on the work still to be done.

The Long and Winding Road to Gonski 2.0

With so many different stakeholders, Australia’s school funding journey has been challenging – and at times poisonous – for decades.

The 2011 Gonski report offered a new path. Most observers recognised the wisdom of a national, needs-based, sector-blind funding model, even if not everyone agreed what those words meant.

With a clear goal in sight, a broad cross-section of stakeholders started to march to a common beat. Sure, not all states were on board. Nor was then Opposition Leader Tony Abbott. Yet in a super-heated political environment, Labor passed the Education Act 2013 and signed most states up to the associated National Education Reform Agreement (NERA). When the drumbeat of Gonski proved too strong for Abbott to resist, Australia went to the 2013 election with the promise of a unity ticket.

The band fell out of step at the 2014 budget, when Abbott and then Education Minister Christopher Pyne proposed a huge cut to the legislated funding trajectory after 2017. Both parliament and the public roundly rejected the cuts, but the damage was done.

For the next three years, the funding debate wandered around in circles, with aspirations to achieve needsbased funding but no credible plan for how to get there.

The 2013 Education Act certainly wasn’t the answer: many underfunded schools would not be properly funded for decades, while other schools would still be over-funded at the end of the century. Labor’s “no school will lose a dollar” promise had entrenched decades of special deals done by both sides of politics, and skewed the model away from genuine need. The legislation also locked Australia into long-term funding growth rates that were too high given low wages growth. All up, governments would have to find around $5 billion more every year to fully fund all schools under this approach.

NERA was Labor’s (too costly) answer, but it was on life-support while ever the Coalition governed the nation.

With the deadline for a new funding model looming ever closer, I wrote in my November 2016 report that “School funding needs a circuit breaker.”

Simon Birmingham took on a daunting task as Education Minister: how to escape the marshland without blowing the budget. He set the direction early by reaffirming the Coalition’s support for genuine needs-based funding. The harder part was to create an affordable and politically saleable path back onto solid ground. That was the ambitious goal of the ‘Gonski 2.0’ package, unveiled in May.

Taking into account the initial proposal, amendments negotiated by the Greens and the crossbenchers, and stakeholder responses, the upshot might be described as six steps forward, three steps back.

First and foremost, Australia is now committed to a national needs-based funding model built around an agreed target for each school, called the Student Resourcing Standard (SRS). Each school’s SRS comprises a base funding level for every student, additional loadings for disadvantage, and parental contributions for nongovernment schools.

Bipartisan agreement on this model is a triumph for the original architects of Gonski. In my opinion, it is also a tribute to Labor and the Australian Education Union, who won the policy argument about needs-based funding even though they opposed the 2017 legislation.

Second, we have overcome the mindset that no school can ever lose a dollar. Birmingham did what Labor could not, and reduced funding to the most over-funded schools, most of which are wealthy Independent schools. The savings are moderate in the broader scheme of school funding, but deeply symbolic. Tellingly, the feared private school backlash never came to pass, because many underfunded Independent schools benefit and the sector felt the deal was fair.

Fourth, Commonwealth funding will now be consistent across states and territories. This is an improvement on Labor’s model, where big differences in Commonwealth funding to states were driven by discrepancies in statefunding, not student need. It also reduces the opportunity for states to haggle over money at Education Council and COAG meetings.

Fifth, the creation of a National Schools Resourcing Board will at least partly separate funding from politics. It will provide independent advice to the Federal Education Minister (who makes the final decision) on the SRS formula and future indexation rates. It will also report on how state governments and non-government school systems are distributing their funds, enhancing transparency and accountability.

Sixth, there will be a review of the most contentious element of the SRS formula, the socio-economic score used to calculate parental capacity to contribute.

These are six big steps towards fairer and more consistent funding. But there were also three sizeable steps backwards.

The biggest step backwards, in my view, was the response of the Australian Education Union and Labor. Instead of focusing on the national benefits of delivering needs-based funding more cost-effectively, they focused on the headline dollars. Where they could have claimed philosophical victory, they opposed the bill. Labor now needs to carefully review its funding policy for the next election.

The next was the anger generated within states and territories. Gonski 2.0 steps away from Labor’s model, where the Commonwealth would cover most of the extra cost of needsbased funding. Some states will need to find billions of extra dollars over the next decade to fully fund their state schools. They will not feel inclined to make the next stages of the journey easy for the Commonwealth.

The last was the anger generated within the Catholic school community, which threatened to reopen old sectarian wounds. The key policy change was to lift the amount parents are expected to contribute in middleand high-SES Catholic primary schools. Catholic pushback focused on the need to keep fees low for all systemic primary schools, but this is not the type of ‘need’ many Australians had in mind when they marched under the banner of “I give a Gonski”.

Last-minute amendments caused another issue. Catholic leaders argue their schools inadvertently lost $1.1 billion in funding over a decade when the Senate negotiated an accelerated six year timeframe for under-funded schools, while over-funded schools stayed on a ten year transition path. Because Catholic systems are blockfunded, any over-funded school within an under-funded system will lose its extra funding over six years, not ten. In my view, all schools should reach their Commonwealth SRS target by 2023. The asymmetrical timing has created an inconsistency between Catholic and standalone Independent schools.

There is still more to do, despite the progress of the last two months. The immediate hurdle is setting up the National Schools Resourcing Board, with Board members to be nominated by the states, Catholics and Independents. Some may choose to ‘go slow’ to put pressure back on the Commonwealth. The first task of the Board will then be to review the socioeconomic score; but with no obvious replacement, the process may not be straightforward.

A much bigger bridge for the Commonwealth to cross is getting states and territories to sign a new national reform agreement plus bilateral implementation agreements. Commonwealth funds come with strings, including that states should fund at least 75% of SRS for state schools, and 15% for non-government schools. States can fund above this level without penalty, but the Commonwealth may withhold money if state funding falls below this level after 2023. The devil will be in the detail. Among other things, every state budget accounts for school funding differently: some include early childhood education, others the cost of housing teachers in remote communities. Agreeing funding baselines will be a hard-fought negotiation with each state. Despite the complexities, I believe that a model with consistent Commonwealth funding plus state flexibility will prove to be workable, and more stable than the alternatives.

The Gonski 2.0 Review, now underway, may propose further Commonwealth conditions, but is a subject for a different day.

Even once the Commonwealth elements of funding are fixed, other stakeholders still have many rivers to cross. States will need to rebalance their funding in the light of Gonski 2.0. Catholic and Independent systemic schools will need to review their internal funding allocations. Schools will need to revise their budgets to make the most of the funds they have. Questions remain about how disability funding will work in practice. And as any hiker knows, rivers often look easy to cross from a distance; it is only close up that rapids become apparent.

Acknowledging all the work still to be done, I remain optimistic. Australian school funding is in a much better place than it was a year ago, with broad agreement on the overall national direction. Even better, a smoother funding path ahead will help us lift our sights and our national discussion to face the real challenge: how to improve student outcomes. Because that is what this whole funding journey is really about.