Should the wealthy repay more of their student loans? 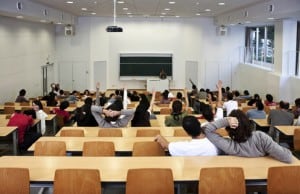 The Australian university reforms announced in May, which include changes to the Higher Education Loan Program (HELP), are moving towards a parliamentary vote.

A key issue for such income-contingent student loan schemes is where to set the initial income threshold at which debtors start repaying. Set too low, it can cause graduates serious financial hardship. Set too high, it means that significant amounts of debt will not be recovered.

By international standards, Australia’s system is very generous in exempting debtors from repayment. Although current exchange rates exaggerate the differences, the Australian initial threshold of A$55,874 converts to an annual income of about £34,000: 60 per cent above the English threshold of £21,000 and triple New Zealand’s of NZ$19,136 (£11,000).

If the legislation passes, the Australian threshold would drop to A$42,000. This matches recommendations made in a Grattan Institute report that I co-authored last year, and would mean that almost every graduate in a full-time job would make a repayment, along with a much larger number of part-time employees.

The last point is important for HELP’s finances. More than a quarter of Australian graduates work part-time. Many of them can afford to do so indefinitely, because their partner is their family’s principal income earner. Eventually, their unpaid student debt will be written off, even though they live in relatively affluent households.

But not everyone shares the view that more student debt should be recovered by lowering the repayment threshold. Recent debate reveals competing ideas about what policy goals the threshold should have.

When income contingent loans were introduced in Australia in the late 1980s, the threshold was set close to the average wage. The public was told that if graduates did not get a private financial benefit from their qualification – defined as a personal income matching or exceeding that of the average worker – they would not have to repay their loan.

Although the current threshold is below the average wage, it is indexed to wage growth. And since wages usually increase faster than prices, the threshold’s real value has increased by 16 per cent since 2004.

The government has not reiterated the private financial benefit guarantee for a long time. But the high and increasing threshold has reinforced the cultural legacy of that original rationale. Some people are taking the principle further, and propose lifting the threshold even higher. In recent parliamentary committee hearings, a tertiary education union official suggested linking the threshold to the A$79,716 average wage of full-time employees.

Although the opposition Labor Party has not committed to a higher threshold, one of its education shadow ministers said in a recent article that graduates should receive a “substantial” private benefit before repaying. And a former senior Labor adviser argued that HELP should be seen as a profit-sharing scheme, rather than a loan.

Apart from the precedent set by HELP’s history, the rationale for guaranteeing a high private benefit is not clear in anything published to date. There are hints of a graduate tax in the ideas being presented, but the logic has not been spelled out.

To work financially, graduate taxes cannot be capped at an original loan amount. By contrast, fees financed through HELP allow students to take on known amounts of future financial liability, and give universities their own revenue sources, giving rise to a larger and better higher education system than would otherwise have been possible. Despite past claims about the deterrent effect of student debt, participation is at record levels across the socio-economic spectrum.

Instead of being increased, the repayment threshold should be better integrated with Australia’s general approach to protecting people from financial hardship. In a targeted, means-tested welfare state, a high repayment threshold is an anomaly, made more incongruous by the fact that much of the debt write-off subsidy goes to affluent households.

A lower repayment threshold would align better with social security payments and the minimum wage, reducing HELP’s costs and targeting its spending on Australians in genuine financial need.