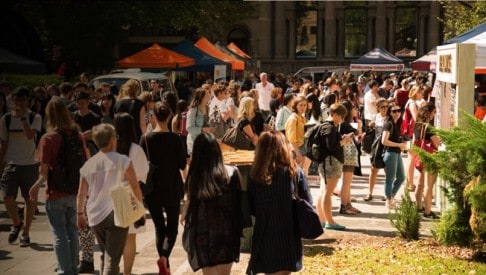 Slow path to getting fee reform in university sector

Earlier this week Australia’s most influential higher education minister, John Dawkins, lamented a contemporary malaise in higher education policy. From his perspective, too much of the policy architecture he put in place nearly 30 years ago is still there, not coping with circumstances never anticipated in the late 1980s.

This is true of Dawkins’ most innovative policy, the HECS loan scheme under which students can pay nothing upfront, repaying later according to their income.

Originally, HECS loans were taken out by a limited number of students in price-controlled courses. Most early graduates borrowing under HECS left university with debts of $12,000-$15,000 in today’s money.

Rebadged as HELP, income-contingent loans are now available to unlimited numbers of higher education students. Fees for undergraduates at public universities remain regulated, but courses are more expensive than in the late 1980s. Graduates typically leave with between $18,000 and $40,000 in debt. Many students in postgraduate courses and in private higher education pay deregulated fees. In 2009 VET FEE-HELP loans were made available to some vocational diploma students, and extended to all vocational diploma students from 2012.

HELP lending has changed significantly but its repayment system has not. The initial threshold for repayment is indexed to average weekly earnings, a Dawkins-era policy. As a result, it has increased much more quickly than inflation, reaching $54,869 for 2016-17.

The threshold was not set with vocational education in mind, and is unrealistically high for people with diploma qualifications. At least 40 per cent of the money they have been lent is unlikely to be repaid. VET FEE-HELP’s regulation of education providers was designed for higher education, and proved disastrously inadequate for the scandal-prone vocational education system.

For higher education graduates about 20 per cent of HELP won’t be repaid. The threshold is too high for most graduates who work part-time.

Compared to the late 1980s, we have many more students borrowing much more each on average at a higher risk of non-repayment. With annual HELP lending of $8 billion and costs exceeding $2 billion a year, HELP needs reforming to reflect contemporary borrowers and borrowing levels.

Although student course charges are higher now than in the late 1980s, the method of setting the total amount universities receive per student still has strong links back to Dawkins’ time. Per student funding rates are not informed by any recent cost data, or by the standards universities must now meet, or by the type of education students might want to receive.

In 2014, then education minister Christopher Pyne proposed solving these problems by letting universities set their own fees, and Dawkins believes that this is still worth considering. But Pyne’s proposal was rejected by the Senate and cannot be revived.

Fee deregulation was politically doomed because neither the government nor the universities could point to persuasive student benefits from deregulated fees. With strong evidence that international student fees were heavily subsidising research, domestic fee deregulation looked like a bad deal for students. With an unreformed HELP repayment system, it would also be a bad deal for taxpayers through increased HELP doubtful debt.

We need a way of setting per student rates that improves on the status quo, but without full deregulation. That is one possible outcome of a higher education policy options paper released by education minister Simon Birmingham in May.

Ideally, funding rates should start by costing the type of education we hope to deliver. As in other public sector services like health, activity-based costing can encourage efficiency while still meeting standards. Universities with costs above the funding rate must find ways to teach more economically.

Despite its flaws, our fixed maximum per student funding rates have promoted cost efficiency. Since the mid-1990s, the federal government has regularly kept annual increases in per student funding near or below the inflation rate. Australian universities have contained per student costs by increasing economies of scale, more use of casual teaching-only staff, using infrastructure more effectively through trimester systems, and many other ways. Over the same time period, student satisfaction with teaching has increased. The government is likely to want to keep cost pressure on universities.

Although some aspects of Dawkins’ policy legacy need updating, important reforms have been introduced since he retired as minister.

The most important of these is demand driven funding, which removed previous controls on the number of domestic undergraduate student places. Universities now have a greater capacity and stronger incentive to respond to student and labour market needs. But we could do more to help students make better choices. Some university students with lower ATARs would probably be better off in vocational education.

Not all of John Dawkins’ remaining policies of 30 years ago are exactly right for today. But the higher education sector is in a sound financial position, enrolments are high, teaching is improving, and research productivity is high. Higher education policy needs work, but there is no crisis.