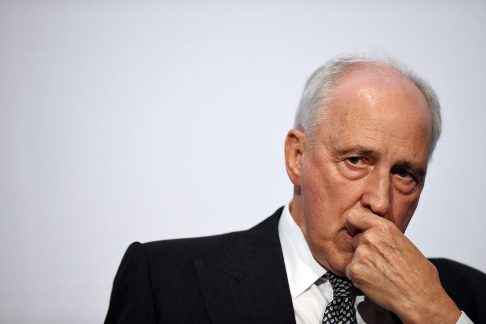 Superannuation is much more than one man’s legacy

No one is as quick to defend Australia’s superannuation system, and the legislated plan to increase compulsory superannuation to 12 per cent of wages by 2025, as its architect, former Prime Minister Paul Keating. But as is often the case when fundamental assumptions are questioned and legacies are at stake, the rhetoric has become more heated and the analysis less careful.

Take Mr Keating’s starring performance on ABC TV’s 7.30 last week, in its four-part series on the future of retirement, where he repeatedly claimed that Australia’s ageing population will make the current pension system unsustainable without increases in compulsory super.

These claims are contradicted by Treasury modelling for the Federal Government’s Retirement Income Review, as well as by actuarial firm Rice Warner. The Review shows that government spending on the pension — stable over the past 20 years — is likely to fall a little, as a share of the economy, over the next 40 years, even as the population ages. In 2001, the Age Pension cost 2.2 per cent of GDP. It’s now about 2.5 per cent, and the review contends it will fall to 2.3 per cent by 2060. And that’s despite the Review projecting that the number of working-age Australians for every person of pension age will fall from just over four currently to approximately three by 2060.

The Retirement Income Review also concludes that the legislated increase in compulsory super from today’s 9.5 per cent of wages to 12 per cent will exacerbate rather than alleviate the budgetary costs of an ageing population, making the Age Pension less sustainable in future. Treasury projects that increasing compulsory super will cost taxpayers more in super tax breaks than it would save from spending on the Age Pension through until 2055. And even then, 35 years of accumulated debt — more than 2 per cent of GDP — would need to be paid back before taxpayers ended up ahead.

These findings on the long-term budgetary cost of higher compulsory superannuation have been remarkably consistent over time. They match Treasury modelling published by the Gillard Government in 2013.

Or how about Mr Keating’s assertion that workers who took $20,000 out of their super during the COVID crisis will have $500,000 less in super when they retire? The available research, including from super industry groups, actually suggests a hit to super of no more than one-fifth to one-tenth that size.

Mr Keating further claims that increasing compulsory superannuation won’t affect wages growth. He seems to suggest that firms which have not volunteered larger pay rises to their employees in recent years will suddenly do so because they’re sending the money to workers’ super accounts rather than their bank accounts.

Yet the research on this issue shows that if compulsory superannuation is increased, workers’ wages will grow even more slowly.

Grattan Institute findings show that 80 per cent of the cost of super comes from lower wages within 2-to-3 years, and probably more in the long term. ANU researchers

Bob Breunig and Kristen Sobeck found that between 70 per cent and more than 100 per cent of the cost of super increases are offset by lower wage growth.

These findings shouldn’t come as a surprise. International studies of similar schemes typically come to the same findings. This is why past federal governments, including Mr Keating’s, concluded that compulsory super is paid out of workers’ wages, rather than by employers.

Mr Keating also claims that raising compulsory super from 9.5 per cent to 12 per cent of wages will ‘barely cut it’. Such a bleak assessment might come as a surprise to today’s retirees who – despite having saved much less than 12 per cent in super – typically have enough money to fund a lifestyle in retirement as good as or better than they had when working.

It’s also news to the Government’s Retirement Income Review, which found that even if compulsory super stays at 9.5 per cent, the typical younger worker will retire with a post-tax income of 83 per cent of what they enjoyed while working – well above the benchmark of 65-to-75 per cent of pre-retirement earnings set by the Review for a comfortable retirement.

Superannuation policy is far too important to be beholden to one man’s legacy. A high-quality debate grounded in the facts – that’s the superannuation debate Australia has to have.