Sydney’s stuck in traffic, putting the brakes on women and the west - Grattan Institute

Sydney’s stuck in traffic, putting the brakes on women and the west

Published at The Conversation, Monday 2 March

Sydney is a city grinding to a halt, with the worst traffic congestion anywhere in Australia.

Our new analysis reveals that over the decade to 2012, the proportion of full-time employees in Sydney who commute for more than 10 hours a week rose from 22% to 29%. Those workers are spending almost three full weeks a year just to get to and from work.

That is one of the new findings in our book, City Limits: why Australia’s cities are broken and how we can fix them, published today. It also shows that residents of large areas of outer Sydney have little choice about long commutes – and congested roads and crowded trains and buses are only symptoms of a much deeper problem facing Australia’s most populated city.

While some people are able to commute to their local area, a lack of local jobs means many have to travel further afield. In some suburbs, only 14% of the jobs available in Sydney can be accessed in a 45-minute car trip. The situation is even worse if you’re reliant on public transport: many outer suburbs of Sydney offer access to fewer than one in 10 of the city’s jobs within an hour on public transport. 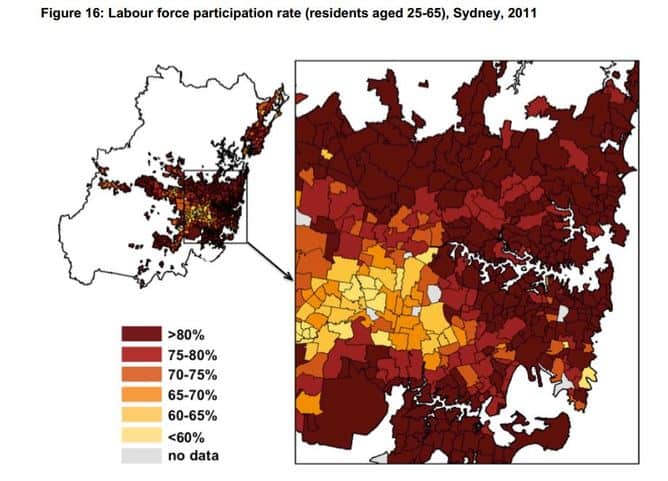 There is a visible different in labour force participation in Sydney, depending on where you live. Grattan Institute, Who lives where: Sydney Productive Cities: Supplementary Maps, May 2013, CC BY

Commuting can be stressful and unpleasant. Long drives caused by limited access to jobs and transport add thousands of dollars a year to household bills, and makes those households especially vulnerable to petrol price rises.

Poor access to jobs especially restricts the choices available to women. Because women still do most of the work looking after children or frail older people in Australian households, they are more likely than men to be constrained in how long they can commute for.

These pressures are opening up a big divide between women in the inner suburbs and those on the fringe.

Our research has shown that men and women in the eastern suburbs and inner west participate in the workforce at relatively similar levels. But in parts of Sydney’s outer west and south-west, women’s workforce participation falls to more than 20% below that of men. 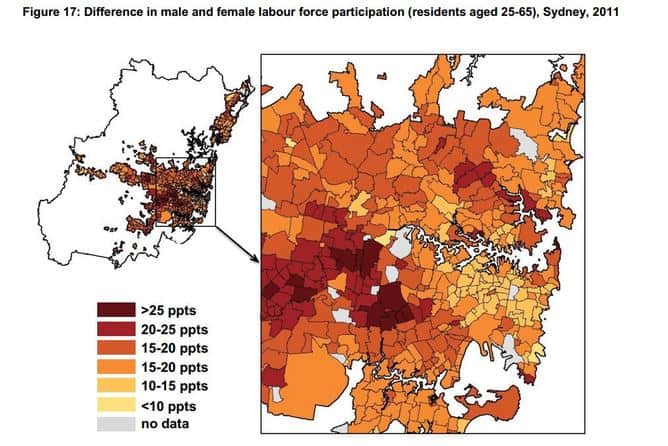 The gap between how many men are in paid work versus women in much greater in some parts of Sydney, especially in the west. Grattan Institute, Who lives where: Sydney Productive Cities: Supplementary Maps, May 2013, CC BY

Taking the heat out of Sydney’s housing market

Along with traffic, housing is a hot topic of conversation almost anywhere you go in Sydney.

High prices mean many younger people are locked out of home ownership that their parents took for granted.

One in four Australian households now rent their home, and many face punishing rents and some of the worst security of tenure in the developed world. 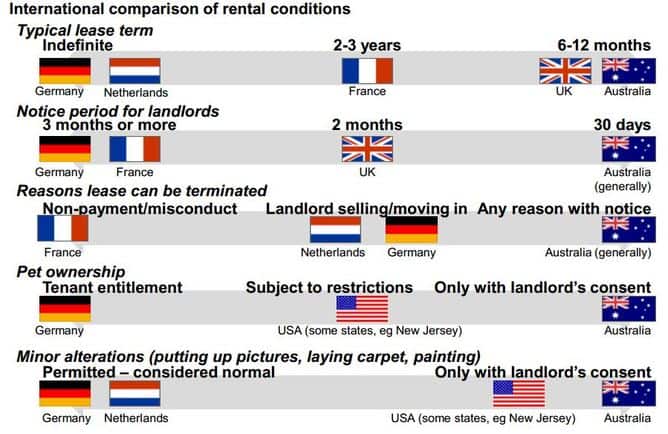 Australian renters typically have fewer rights and less security of tenure than in comparable nations. Grattan Institute, CC BY

For years, even decades, politicians have surrendered responsibility for addressing the rising pressures on city life. Yet they have a vital role to play. Most importantly, the state government can make it easier to build new homes in all parts of Sydney, especially established areas that have good access to jobs.

Making it much easier to build new homes would help improve access to jobs, and give people more meaningful choices about where they live and the kind of home they live in. Less convoluted planning and zoning rules and decision-making processes are essential.

But it’s also vital to have transparent standards for appropriate development, so that residents and communities know what is planned for their community and can have their say about it.

Politicians need to ensure their commitments have effective implementation mechanisms and are followed through.

Over the years, state governments from both sides of the political divide have made and broken too many promises to tackle housing affordability.

Similarly, Sydneysiders have lost count of how many promises to tackle traffic congestion, improve access to public transport or build new transport infrastructure have then not been delivered. Failing to deliver on commitments is a guaranteed way to let Sydney’s problems get worse.

Thinking beyond our own backyards

One reason that promises have fallen by the wayside is because delivering them has required trade-offs between different members of the community. Such trade-offs are inevitable anywhere there is a finite amount of land, and finite amounts of money to spend on transport.

One such trade-off is between local residents of inner and middle suburbs close to employment centres, who may prefer fewer new homes being added in their area, versus residents further out who face longer commutes, along with more traffic on the roads that everyone uses.

Trade-offs are required because the city can’t simply build its way out of this problem. Improving public transport and roads can make a big difference to many people’s lives. But there are limits to what the transport system can do, and new roads and train lines are very expensive.

There’s no perfect way to balance the kinds of difficult trade-offs involved in improving Sydney’s complex traffic, housing and other urban planning challenges.

But it is possible to do better. As overseas experience in cities such as Seattle, Vancouver and Portland shows, genuinely involving residents in making the trade-offs facing cities is essential to making improvements endure, and see promises get delivered.

State and local governments have a critical role in involving all residents in shaping their city’s future. So it’s incumbent on whoever wins this state election to involve the community more in making the hard decisions that are inevitable in tackling the challenges Sydney faces.

But Sydney’s problems are not just for politicians to solve.

Often people know that the status quo isn’t working, but resist the kinds of change in their local area that could turn things around. Sometimes that’s because residents feel it is being imposed on them, without having a say, and the only response is to resist, or pretend it can be avoided.

Yet resisting all change, such as opposing new apartment blocks in well-established suburbs blocks (regardless of their quality), risks backfiring on residents in the long-term. People are now seeing their own children and grandchildren forced to live far from where they grow up – and in a city as congested as Sydney, that means seeing family less often.