Published by ABC, Friday 11 May

The top 20 per cent of income earners in Australia will benefit most from the Turnbull government’s tax plan, unveiled in Tuesday’s budget.

Our Grattan Institute analysis shows most of the revenue reductions to government from the plan are the result of lower taxes on high-income earners.

Once the three-stage plan — including removing the 37 per cent tax bracket — is complete, $15 billion of the annual $25 billion cost of the plan will result from collecting less tax from the top 20 per cent of income earners. That is, people who currently have a taxable income of $87,000 a year or more.

Although the plan itself doesn’t make the tax system much less progressive, it will do little to unwind bracket creep’s work in increasing the share of taxes on middle-income earners.

Bracket creep increases the average tax rates paid by all taxpayers when wages are rising — even if they don’t move to a new tax bracket — because each taxpayer earns a bigger share of their income in their highest bracket.

Bracket creep hits middle-income earners particularly hard. Without changes to tax rates or brackets over time this means a bigger share of the tax collected comes from middle earners and less from higher income earners.

Even under the Turnbull plan, average tax rates are forecast to be higher for all taxpayers in 2027-28 than they are today — except for a few high-income earners who are less affected by bracket creep in the first place.

A taxpayer who earns $120,000-a-year today will pay an average tax rate of 29 per cent in 2027-28, unchanged from today. In contrast, average tax rates for middle-income earners will continue to rise.

The average tax rate for a taxpayer who earns $36,000-a-year today will increase by 6 percentage points (from 10 per cent to 16 per cent). As a result, the highest income taxpayers will bear a lower share of the total tax burden.

Most of the revenue reductions until 2021-22 under the Turnbull plan are a result of the Low and Middle Income Tax Offset. But once the plan is fully implemented in 2024-25, there are much bigger revenue reductions, because the top of the 32.5 cents-in-the-dollar tax bracket increases first to $120,000 and then to $200,000 (removing the 37 cent bracket). In 2028, these bracket changes account for $20 billion of the $25 billion in lower revenue to government. 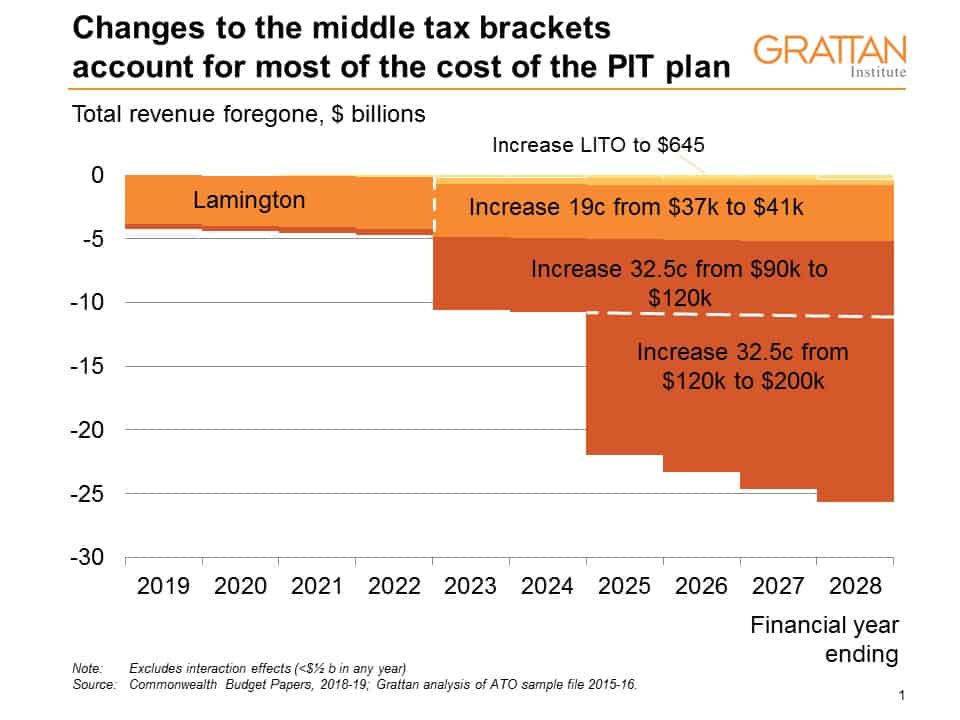 Once the Turnbull plan is fully implemented, most of the reduction in revenue is retained by the top 20 per cent of income earners. In 2028, the reduction in tax collected from this group will account for $15 billion of the $25 billion cost of the plan. 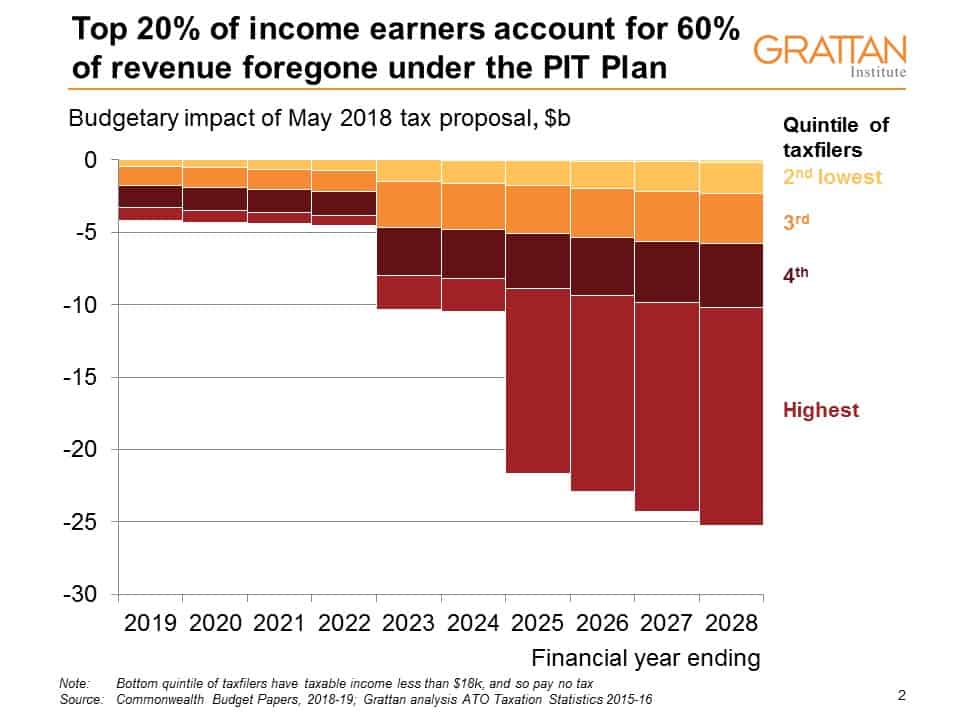 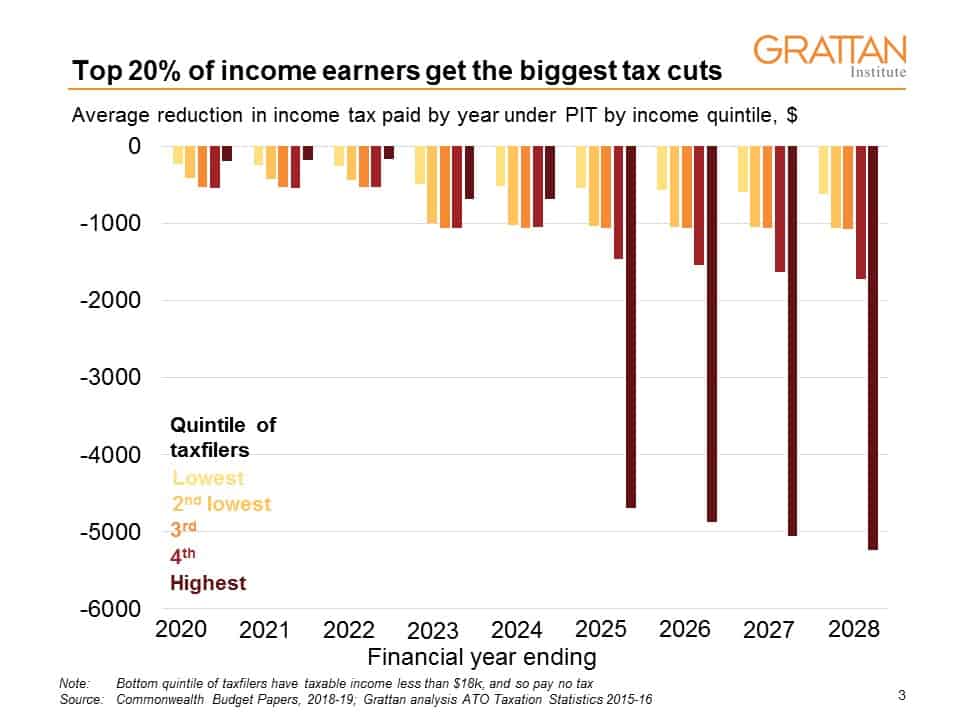 The Government claims its tax plan protects middle-income Australians from bracket creep. Certainly the plan reduces average tax rates in 2027-28 for all taxpayers compared to what they would be if there were no changes to rates or brackets over that period.

The exception is the top 10 per cent of income earners. Average tax rates for those on the highest incomes are virtually unchanged under this plan. 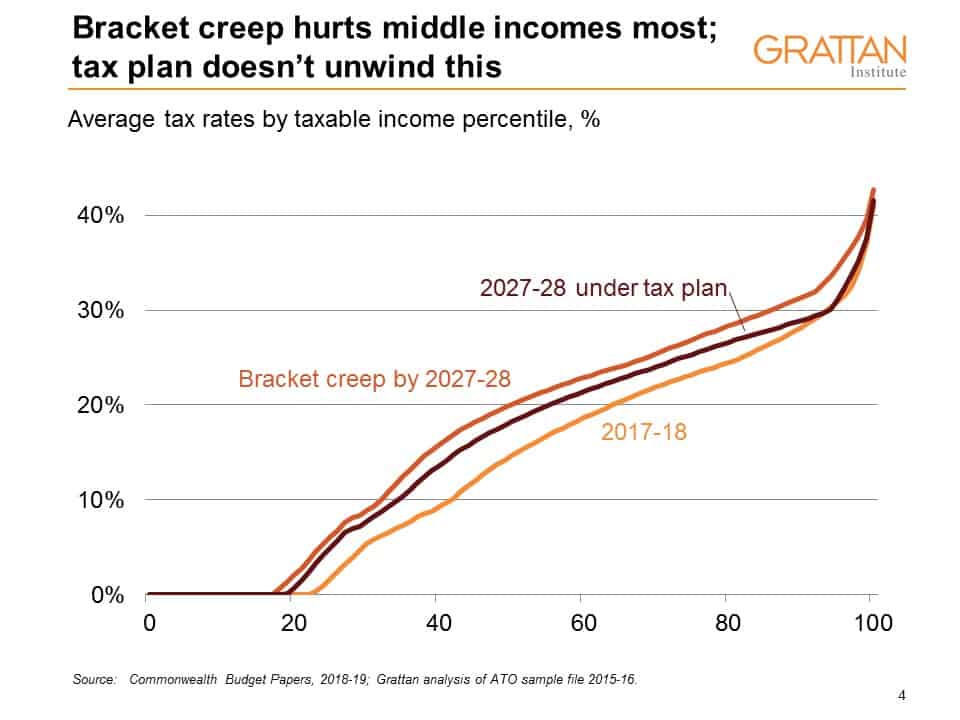 Once fully implemented, the Turnbull plan doesn’t change the progressivity of the tax system much.

Overall, those on high incomes will pay a similar proportion of total tax revenues with or without the plan. But because of bracket creep in the meantime, high-income earners will be paying a lower proportion than today.