The curious case of the missing superannuation fees – Grattan Institute

The curious case of the missing superannuation fees

A recent OECD report claims Australia’s superannuation system has some of the lowest fees of any pension system in the world. But the report is based on flawed data, which has also been heavily criticised by the Productivity Commission.

While there are complications in cross-country comparisons of superannuation fees, a more complete picture shows Australian superannuation fees are not among the lowest in the world. And more direct measures of fees suggest they remain high by international standards.

The OECD’s figure misses much of the story

The latest OECD Pension Markets in Focus report puts superannuation fees in Australia at around 0.5 per cent of assets under management. 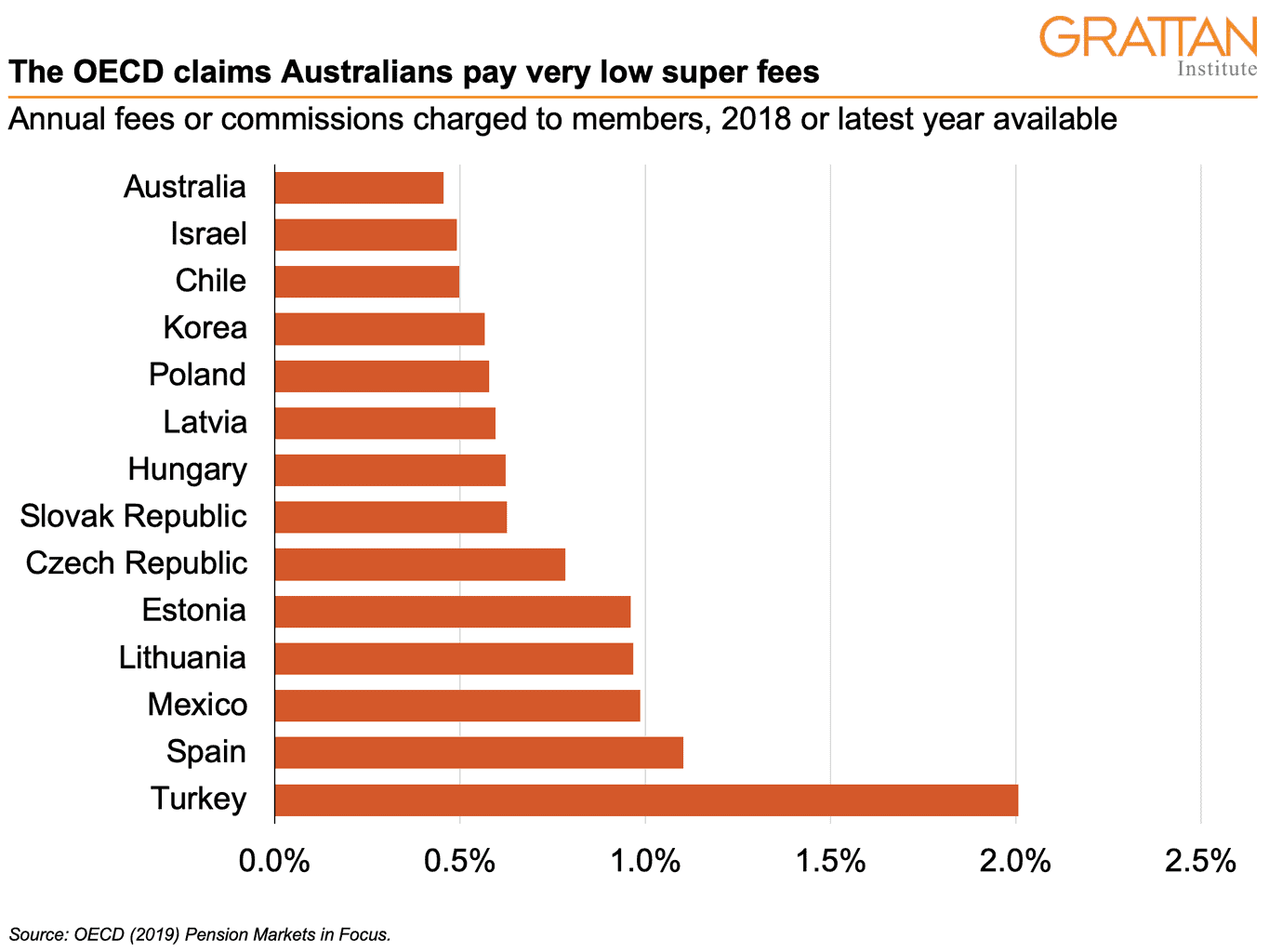 But in fact very there are relatively few superannuation funds where the typical member is paying fees of 0.5 per cent or less of their super balance.

So where does the OECD figure come from?

The OECD’s estimate of Australian superannuation fees come from APRA’s annual Superannuation Bulletin report, which asks super funds the total amount they charged in fees to members each year. The trouble is that the APRA data used by the OECD misses much of the story.

In total just $9.4 billion in direct fees were paid to APRA-regulated funds in the year to June 2018, or around 0.5 per cent of total assets.1

Yet the Productivity Commission (PC) also found (p.163) that many superannuation funds do not report the fees they pay to companies who help to manage members’ investments. And the PC took APRA to task for the fact that at least a quarter of all super funds, and especially higher-fee retail funds, didn’t report all their fees. APRA has begun to take steps to improve its data collection practices, but any changes will take time to come into effect.

In total the PC estimated that APRA data for 2017 missed $7 billion in indirect investment costs and underreporting of direct fees among APRA-regulated funds with MySuper products.2

In contrast, ASIC requires that superannuation funds disclose all their fees to new members in product disclosure statements.4 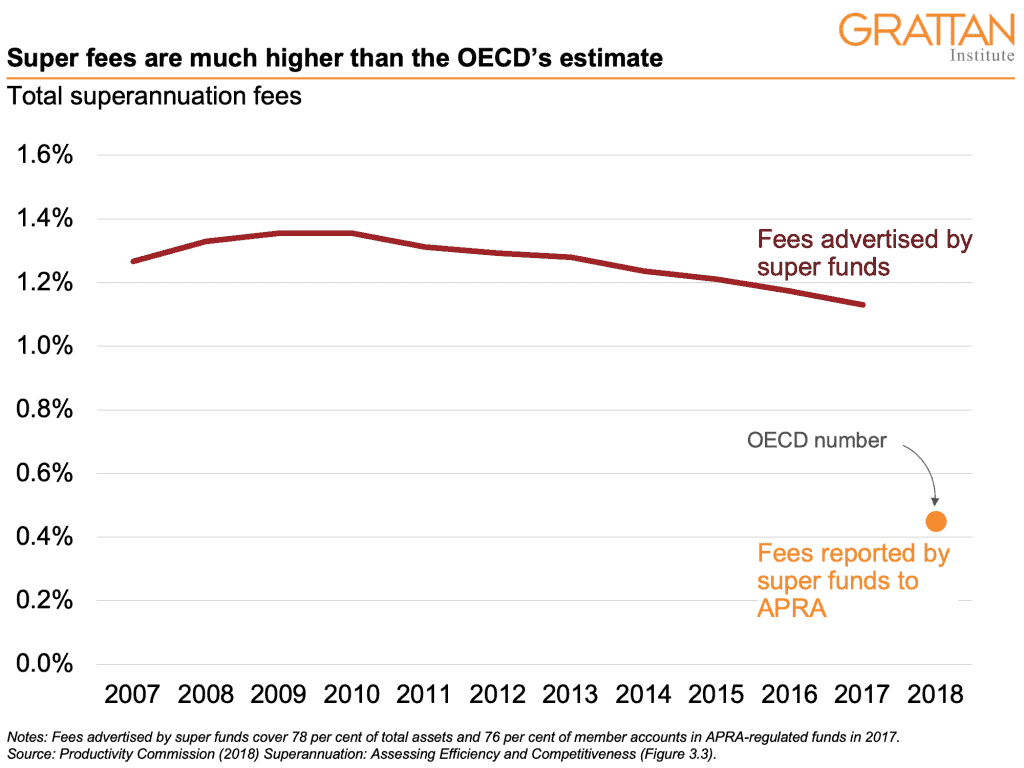 The OECD acknowledges these issues in its report, stating:

“Data may underestimate the actual charges on the pension pot (sic) paid by members in some countries through indirect costs reducing investment returns for instance.”

Superannuation fees of 1 per cent might seem small, but the bill must be paid on the entire balance of your superannuation account every single year. Small changes in fees can really add up.

A young person today paying fees of 1 per cent instead of 0.5 per cent, will lose around 10 per cent of their retirement nest-egg. 6

High fees would not matter so much if we were confident that high-fee super funds were earning their keep. But Grattan’s 2015 report Super Savings found that funds that charge high fees were also some of the worst performers, delivering poor value for money for their members.

“While some may be receiving exceptional investment returns or member services, the evidence indicates that funds that charge higher fees tend to deliver lower returns, once both investment and administration fees have been netted off. High fees also persist over time.”

Of course international comparisons of pension system costs are complex. As others have noted, differences in regulatory structure, taxation, and reporting requirements will all affect the results. Meanwhile underreporting of fees and indirect costs may occur in other jurisdictions too.

To side-step these factors, the PC also directly compared the investment management costs of Australian super funds against international peers by asset class. It found that for most asset categories, Australians are paying much higher fees than pension funds in the US or Europe.7

In fact when it came to Australia’s superannuation fees the Productivity Commission concluded (p.158):

“Superannuation fees in Australia are higher than those observed in other OECD countries. This may be partly because Australian funds face higher expenses. While international comparisons are not straightforward, there is evidence (by asset class) that Australian investment management costs are generally high by international standards, including for significant asset classes (such as equities and international fixed income).”

On any reasonable measure, Australian superannuation costs still appear high by international standards, and are certainly far from being the lowest as the latest OECD data suggests.

4. Although as the PC noted (p.155), they may not capture their full extent for all funds and products.