All Australian state governments have targets to cut greenhouse gas emissions to net zero by 2050.1 This means Australia has a de facto national target of net zero emissions by 2050 too. But official Australian government projections released in early December suggest we are not on track to hit the target.

Emissions come from many sources. The largest in Australia is burning fossil fuels to make electricity – around a third of total emissions. Though declining, at the projected rate emissions from electricity won’t reach zero until around 2060.

Worse, most other sectors of the economy are projected to emit more in 2030 than they do today. This includes transport, agriculture, direct combustion, and fugitive emissions, which together account for more than half of Australia’s emissions. 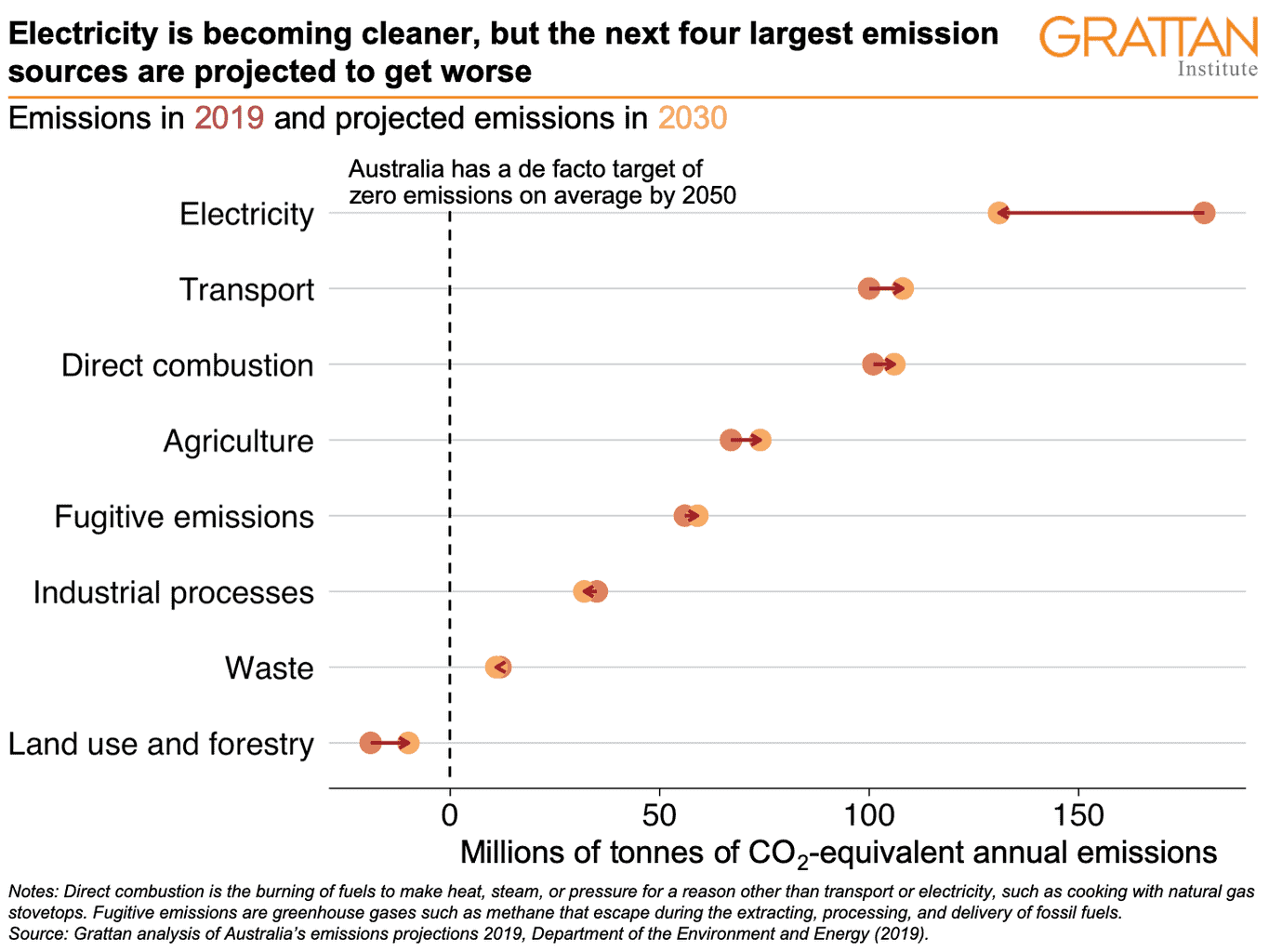 Electricity is doing the heavy lifting

The Australian government is relying on the electricity sector to drive Australia’s emissions reduction to 2030. Electricity generation is projected to emit 27 per cent less carbon in 2030 than today. This is due to increasing use of renewable energy, and decommissioning of coal-fired power stations as they reach the end of their lives. Underpinning the uptake of renewable energy is its economics – the technology has become dramatically cheaper – and the effect of state-level policies, not national policy action.2

But the electricity sector cannot reduce Australia’s total emissions to zero on its own. Action is needed in other sectors.

Other sectors are a problem

It is relatively easy to reduce electricity emissions; cutting emissions in other sectors is much harder. 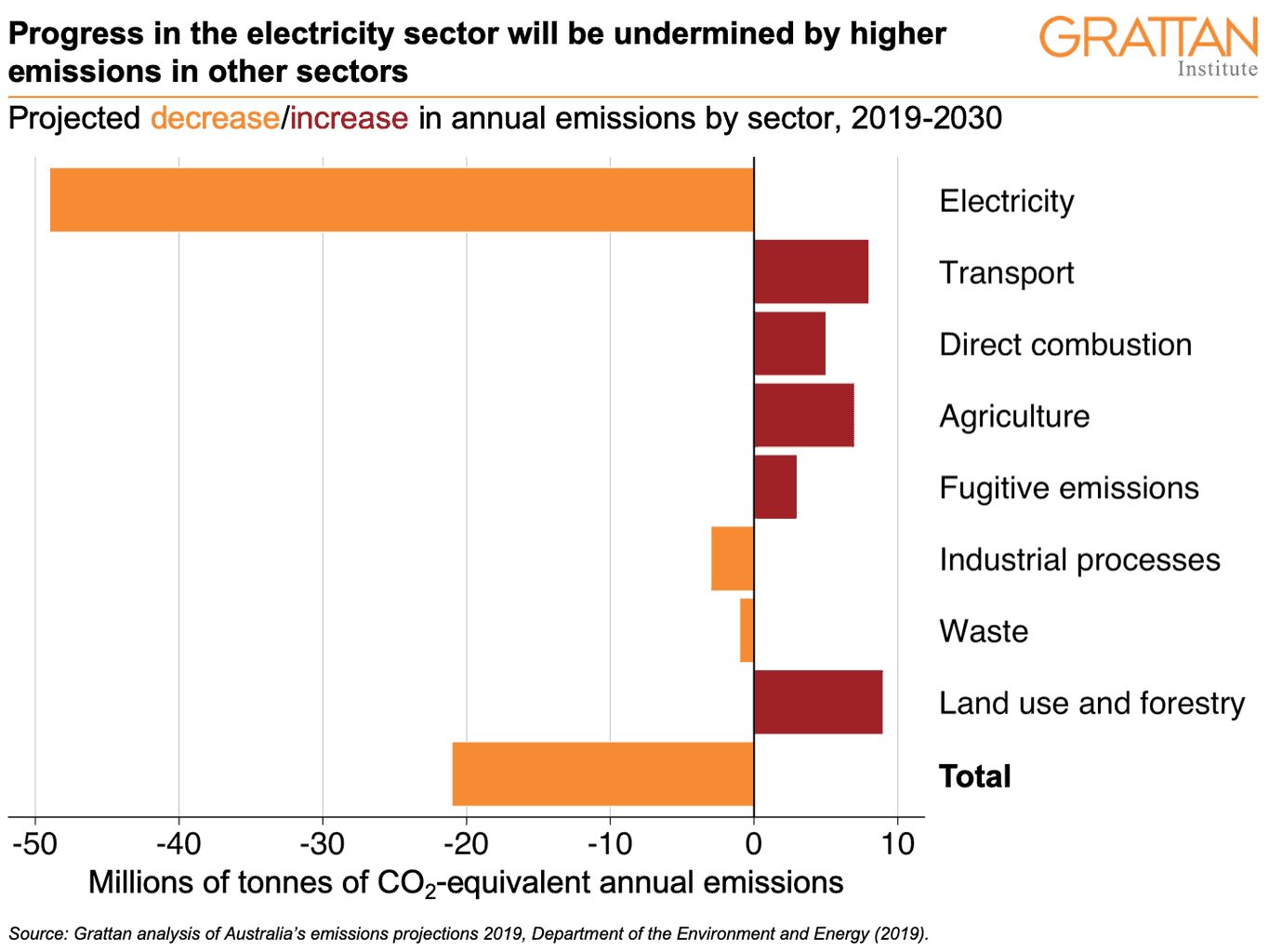 Consider transport. Emissions are expected to rise, not fall over the next decade. This is despite electric vehicles gradually cutting emissions as they enter the market. And it is much less clear how we will reduce emissions from aviation.

Or take agriculture. Most of Australia’s agricultural emissions come from cows and sheep, which belch the greenhouse gas methane. Curbing these emissions will be extremely difficult, requiring some combination of biotechnology, carbon offsets, and demand for synthetic alternative products.

The sector known as ‘Land use and forestry’3 can either release carbon – for example, clearing forests or burning vegetation – or capture carbon, through regeneration of cleared land. Currently it offsets 4 per cent of Australia’s emissions, or 19 million tonnes of CO2. But the government projects that even this sector is moving in the wrong direction, and will capture only about 10 million tonnes in 2030. We should be growing these carbon sinks to offset emissions in the most difficult-to-transition industries, such as aviation and cattle farming.

Australia urgently needs a national plan for an economy-wide transition

To achieve Australia’s 2030 emissions reduction target – 26-to-28 per cent below 2005 levels – CO2-equivalent emissions need to be 80-to-92 million tonnes lower in 2030 than today. That’s a much bigger cut than the 21 million tonne reduction that the government expects, which is the net effect of good progress in electricity being largely cancelled out across the rest of the economy.

The government’s claim that we are on track to meet our 2030 targets relies on Kyoto ‘carryover credits’: the government argues that Australia met its former targets faster than expected, so the emissions we saved in the process should be allowed to count towards our current target.

But the use of carryover credits – and the government’s focus on 2030 targets – cannot hide the simple fact that Australia is nowhere near on track to achieve the 2050 goal of net zero emissions. Reducing emissions across all sectors will take significant effort; using carryover credits today is procrastination we can’t afford. And even if we succeed in decarbonising by 2050, using carryover credits along the way will result in more cumulative emissions, and more global warming.4

Relying on carryover credits and the electricity sector alone means Australia will need to make faster, more expensive changes to get back on track. The best time to plan for an economy-wide transition was yesterday; the second-best time is now. 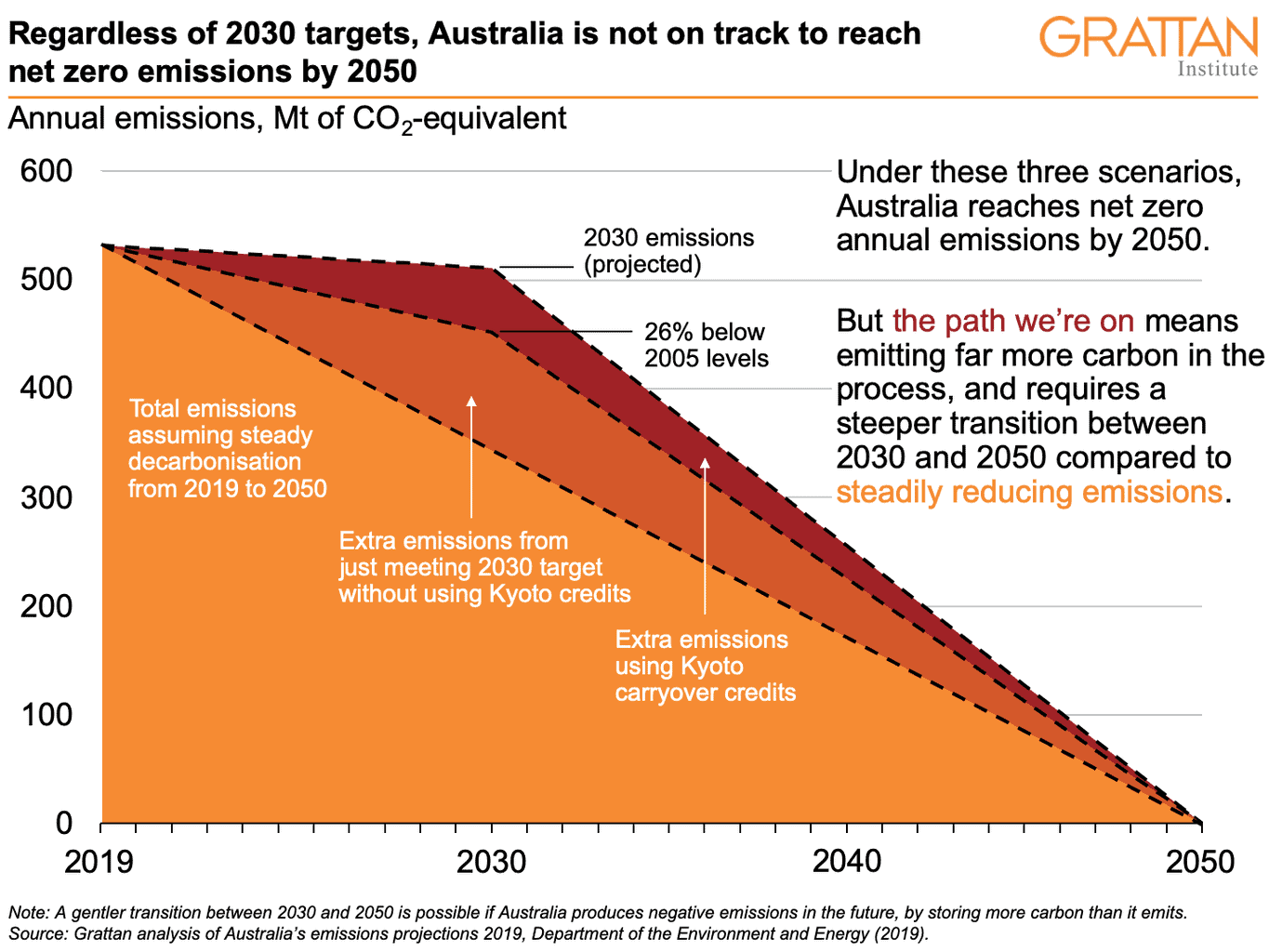 2. The main national policy to reduce electricity emissions, the Large-scale Renewable Energy Target, has already been achieved and is unlikely to drive significant renewable investment after 2020.

3. Formally ‘Land use, land use change and forestry’, or LULUCF.

4. Unless these emissions are offset by other countries emitting less themselves, or Australia producing negative emissions from 2050 onwards.