The JobSeeker rise is not enough - Grattan Institute

The JobSeeker rise is not enough

Australians on unemployment benefits will receive an extra $25 a week under changes to JobSeeker from April, but the payment will still be substantially below the poverty line.

JobSeeker, formerly known as Newstart, usually only rises in line with the cost of living. Other than small adjustments– such as at the time the GST was introduced in 2000 — this will be the first time the benefit has been increased in real terms since the early 1990s.

But for people currently on JobSeeker, it will feel like a cut, not a rise. That’s because since COVID-19 arrived in Australia, unemployed people have been receiving the Coronavirus Supplement. The supplement at first was worth $275 a week on top of the basic JobKeeper, then in September 2020 it was cut back to $125, and now it’s $75 per week. People on JobSeeker on 1 April will therefore get a $50 per week cut in their payments, as the $75 Coronavirus Supplement is removed and the new $25 increase is added.

Jobseeker is well below the poverty line

Even with today’s announcement, JobSeeker will remain well below usual measures of the poverty line.

Australia doesn’t have an official poverty line, but we have at least two measures commonly used by researchers — the relative line, which is half of median household income, and the Henderson line, which was set by an inquiry in the 1970s and is updated by the Melbourne Institute. The relative line is used most often, including by international organisations like the OECD.

The gap wasn’t always so big. As Chart 1 shows, back in the early years of the Howard Government, the unemployment benefit was nearly at the relative poverty line. 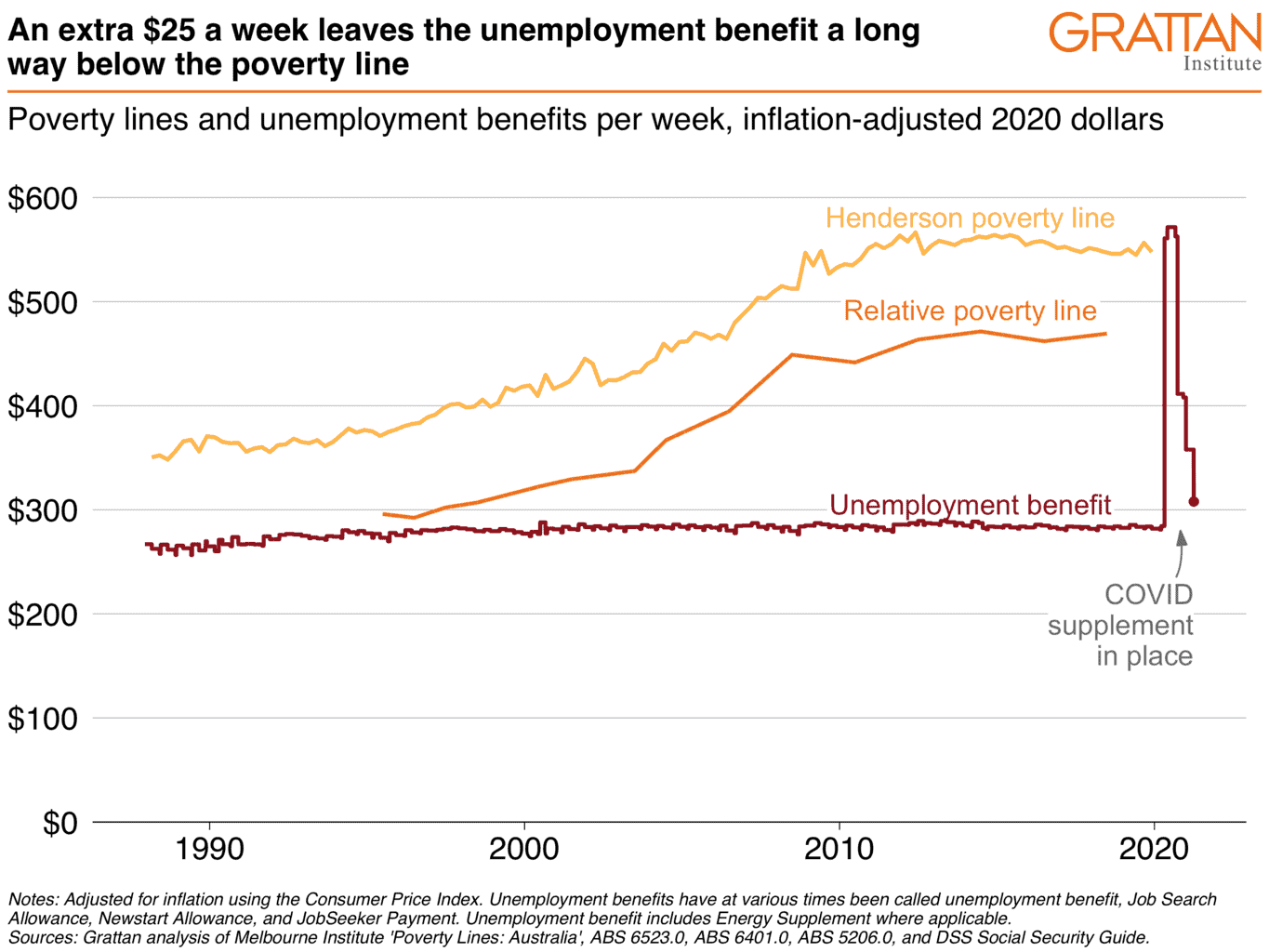 By the time John Howard left office in 2007, the Newstart Allowance was  $214.90 per week. The minimum wage for a full-time worker was $522.12 per week, so the unemployment benefit was worth 41 per cent of the minimum wage.

Today’s announcement of an extra $25 per week in JobSeeker puts the payment right back where it was in 2007 — 41 per cent of the minimum wage.

And today’s announcement barely puts a dent in the large and growing gap between payments to unemployment people and payments to pensioners. Back in 2000, Newstart was worth 89 per cent of the single pension; after the $25 increase, it will be worth just 66 per cent of the pension. 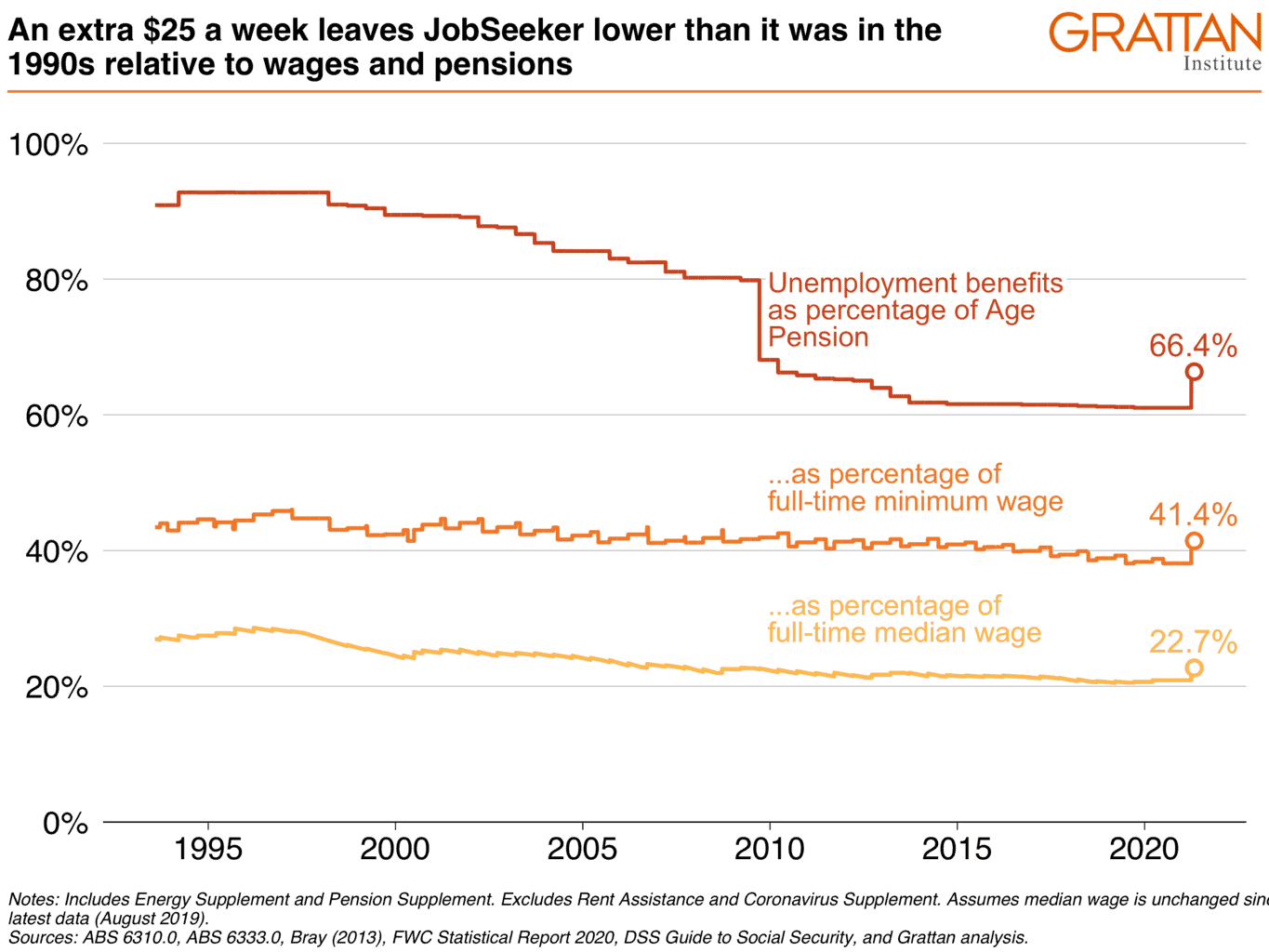 Even after today’s announcement Australia will have the second-stingiest payment for newly-unemployed people out of all 37 members of the OECD, behind only Greece.

An Australian on an average wage who loses their job will find that JobSeeker and Commonwealth Rent Assistance combined add up to only a bit more than a quarter – 27 per cent – of what they earned when they were working. An unemployed Canadian would get 62 per cent of the average wage. The average across the rich countries is 58 per cent, about double Australia’s new payment. 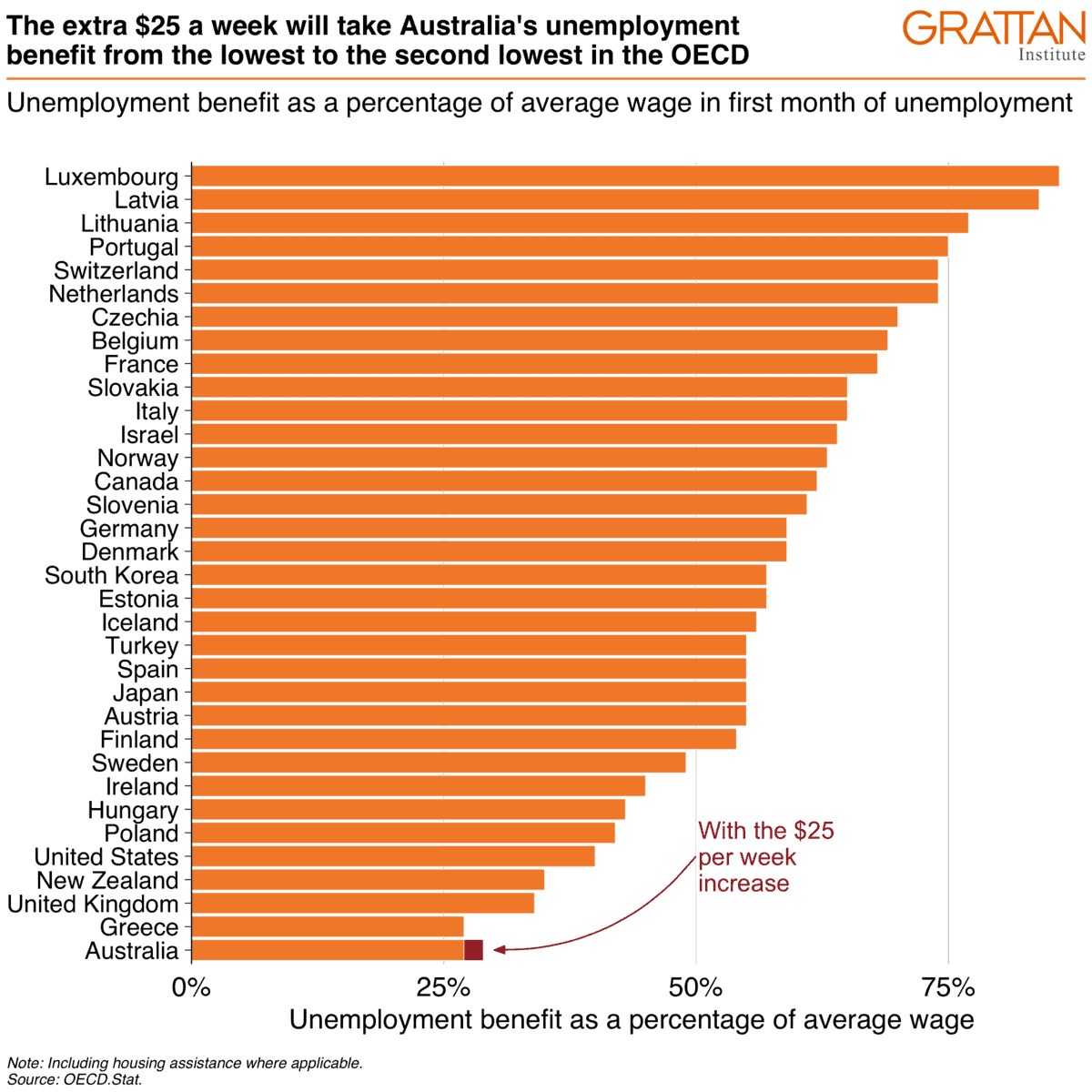 JobSeeker will still be benchmarked in inflation, not wages

The reason JobSeeker got so low in the first place is because allowance payments such as JobSeeker (but also Youth Allowance) are adjusted only in line with changes in the cost of living, as measured by the Consumer Price Index (CPI). This means that a person on the unemployment benefit falls further and further behind other Australians, including pensioners. Today’s announcement does nothing to fix that problem.

Now is an especially bad time to cut the Coronavirus Supplement

In his announcement today, Prime Minister Scott Morrison said he was concerned that leaving the current JobSeeker rate in place (including the Coronavirus Supplement) would dull job seekers’ incentives to search for work.

Yet there is little evidence that the current level creates a big disincentive to work: even after the JobSeeker rate was doubled last year, there was little change in the proportion of unemployed Australians who found work each month, or in the rate of advertised job vacancies.

After all, searching for jobs takes time and costs money. Set the rate too low and unemployment Australians will struggle to afford to search for work, a concern noted recently by the OECD among many others.

We already require unemployed people to jump through lots of hoops – applying for jobs, doing ‘mutual obligation’ – that make JobSeeker far from a comfortable existence. And today’s announcement includes measures to further tighten those requirements.

Lowering the overall level of unemployment benefits that jobseekers will receive in the middle of a recession is likely to cost jobs, rather than create them. Australia’s economy has made a stronger-than-expected recovery from COVID so far. But, as the Governor of the Reserve Bank recently noted, ‘we still have a fair way to go’. Unemployment remains high at 6.4 per cent. On current forecasts, it won’t return to pre-crisis levels until at least 2023. Even lower unemployment will be needed to get real wages moving again.

JobSeeker is one of the best forms of fiscal stimulus there is: since people are unemployed, they’re likely to spend most of what they receive. Cutting the $75 a week Coronavirus supplement, and replacing it with a lower but permanent $25 a week rise, is a missed opportunity. It is likely to cost jobs, and it means unemployed Australians will continue to languish well below the poverty line.