When governments decide to build a new road, bridge or train line, their first concern should be getting it at the cheapest possible long-term price for a given quality standard.

But our new report, Megabang for Megabucks, shows cost management is rarely top of mind for governments. And, with the trend towards ever-larger projects, the risk that a lack of competition for contracts will push up prices is very real.

Australia is an expensive place to build large transport projects. An international study of rail projects found costs in Australia are in the top quarter of 27 OECD countries. Our costs are much higher than in many other rich countries: 26% higher than in Canada, 29% higher than in Japan, and more than three times as high as in Spain. 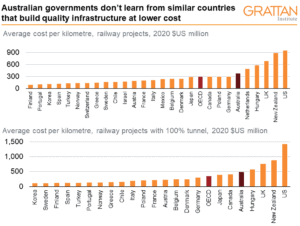 Of course, international comparisons are fraught. The cost of any particular project depends on local factors such as geology, location and the extent of the existing network.
But competition among construction firms is crucial if taxpayers are going to get the best price. Robust competition encourages firms to bid as low as they can and to innovate. If there is a field of potential bidders on megaproject contracts and the market is open to new entrants, there is also less opportunity for firms to collude by market-sharing, bid-rigging or price-fixing.

Megaprojects – projects costing more than A$1 billion – are typically broken up into a handful of contracts. For the smaller contracts – worth A$500 million or less – there are few concerns about competition: many firms can bid for and win these contracts. But the larger the contract, the thinner the potential field of construction firms gets.

Australia’s “big three” or “tier one” firms – CPB, John Holland and Acciona – win the vast majority of contracts over $1 billion, either independently or in a joint venture with other firms, as the chart below shows. 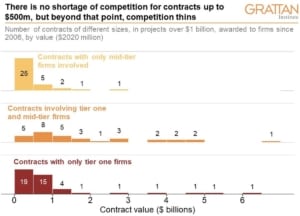 For the largest contracts, even the tier one firms don’t usually go it alone. A joint venture involving two of the big three has won eight out of 11 contracts larger than $3 billion.

When two of these firms form a joint venture, local firms have very little opportunity to compete: even a bid involving the other tier one firm is unlikely to be successful.

An extreme case is the Rozelle Interchange as part of the WestConnex motorway project in New South Wales. At first it attracted only one bid – from a joint venture between all three tier one firms. The state government rejected this offer and re-tendered the job, redesigning the contract in an attempt to entice more bidders.

And what’s really concerning is that these megacontracts are becoming the norm. Contracts above $3 billion in value were a rarity before 2014. In the seven years since, there have been ten, as the chart below shows. 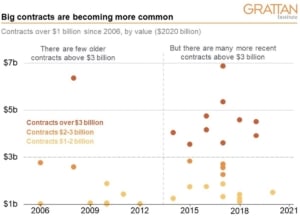 What can governments do about this?

Governments can take a couple of important steps to ensure there’s enough competition for contracts.

When two tier one firms form a joint venture to bid on very large contracts, the only avenue for competition is to involve international construction giants. So it’s crucial that Australian governments don’t give undue priority to domestic experience and cut the internationals out.

Governments should publish weighted criteria for bid selection. This ensures the international firms can be confident they’re not wasting resources bidding, only for governments to stick with the safe option of favouring local firms.

Second, avoid bundling work into bigger contracts than necessary. Governments have an incentive to enact fewer and larger contracts to make contract management simpler and minimise interface risks. These are the risks arising from interactions between multiple contractors, for example relating to site access. But bigger contracts mean fewer firms can bid for the work, particularly when different types of work are bundled together into a single package.

Governments should develop and use a systematic, consistent and transparent process to bundle up packages of work within a project. Examples would be splitting a highway upgrade into a number of smaller sections, or separating the design and construction tasks on a new rail line.

Megaprojects are making up an ever-bigger portion of transport infrastructure projects. Governments must focus on keeping the long-term cost as low as possible for the preferred quality standard. Otherwise, taxpayers will be at risk of paying over the odds.