Published at The Conversation, Wednesday 17 February

The Labor party took everyone by surprise over the weekend when it announced it would limit negative gearing to new housing and reduce the capital gains tax discount to 25%. Proving negative gearing is no longer politically untouchable, the government has hinted its own policy may go some way in the same direction. But even then, some of the myths and half-truths peddled by vested interests have returned to haunt the debate.

Listening to the housing industry you would think that property tax concessions single-handedly drive new housing supply, keep a lid on rents and provide an opportunity for middle and low income earners to build wealth. In reality, these costly tax breaks increase speculation activity in the housing market, reduce affordability for first home buyers and primarily benefit high income earners. So why have some of these myths proved so enduring?

Like many myths, this one relies on some degree of truth – there are many middle income earners who negatively gear – but the emphasis on this group as the primary beneficiaries of property tax concessions relies on a statistical sleight-of-hand.

The government this week pointed out that most people that negatively gear property earn less than A$100,000. This is perhaps less surprising when you consider that so do almost 90% of the population: $100,000 a year puts you well in upper income territory. And the proportion of taxpayers negatively gearing is much higher for those earning over $100,000 than below this amount. 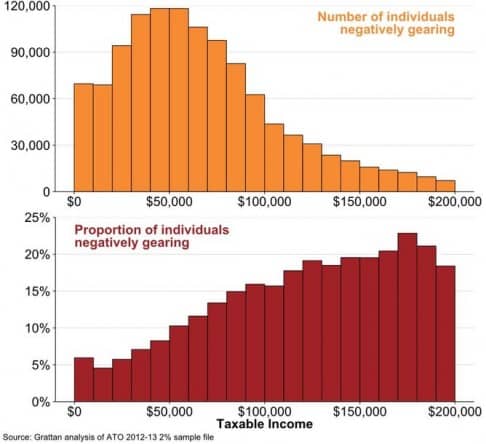 But compounding this myth is way its proponents use taxable income to show the distribution of tax benefits. People who negatively gear have lower taxable incomes because they are negatively gearing. This explains the high proportion of people with no taxable income owning loss making property investments – their declared losses are so large they have reduced their taxable incomes to zero. When we adjust to look at people’s incomes before rental losses are taken out we see that the vast bulk of the tax concession goes to those at the top. The top 10% of income earners receive almost 50% of the tax benefit from negative gearing. 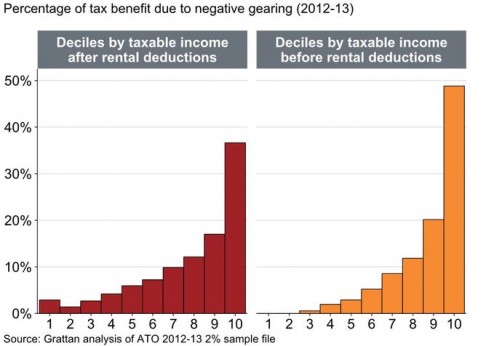 Capital gains are even more skewed towards the wealthy. The top 10% of income earners receive almost 70% of the capital gains.

But what about all the property investing nurses and teachers we hear so much about? Well, there are some teachers and nurses that negatively gear – around 12% and 9% of them respectively. But they are much less likely to use these tax breaks than anaesthetists (29%), surgeons (27%) and finance managers (23%). And the average tax breaks received by those in the high income professions are also much larger, with the average anaesthetist reducing their tax bill by ten times more than the average teacher.

The property industry argues that tax incentives for investment housing encourage more homes to be built. If so, it is a very inefficient way to do it. More than 93% of property lending is for existing housing.

Because negative gearing increases the price of homes it may encourage a little more building. But the big restraint on new building is not a lack of profitability in housing, but the availability of land and the planning permissions required to increase density in inner and middle suburbs. Tax concessions in this supply constrained environment mainly just bid up prices for the limited new supply.

In any case, most policy proposals carve out new supply. The Labor policy continues to allow full tax write offs for rental losses on new housing. So if anything the proposed policy change would encourage new supply.

But the most enduring myth around negative gearing concerns its role in controlling rents.

To understand the origin of this myth, we need to explore some history as well as economics.

The property industry claims that rents rose when the Hawke government restricted negative gearing in 1985. But this is a Sydney-centric version of the past. Rents did rise rapidly in Perth and rose somewhat in Sydney. Yet inflation-adjusted rents were stable in Melbourne and actually fell in Adelaide and Brisbane. In Sydney and Perth population growth and insufficient residential construction – due to high borrowing rates and competition from the stock market for funds – not the policy change, led to the rent rises. 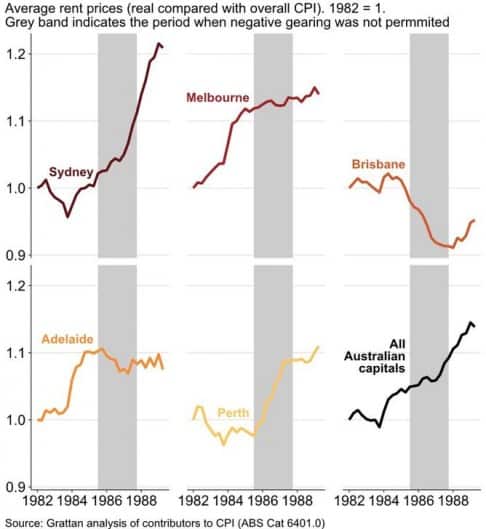 The industry also claims that if negative gearing is restricted, landlords will try to pass on some fraction of their higher tax costs by pushing up rents. But will they succeed?

Rents are ultimately determined by the balance between demand and supply for rental housing. In property markets – as in other markets – returns determine asset prices, not the other way around. Rents don’t increase just to ensure that buyers of assets get their money back.

Many other landlords with investment properties that are profitable won’t be paying higher taxes. Tenants will try to beat rent rises by threatening to move. So competition in rental markets will limit material rent rises.

Some investors may sell their properties if tax concessions are less generous. This might reduce house prices, but it will not increase rents. Every time an investor sells a property, a current renter buys it, so there is one less rental property and one less renter, and no change to the balance between supply and demand of rental properties. Indeed, one of the benefits of changes to negative gearing is that it makes housing more accessible for first home buyers.

The Labor party was brave to propose changes to negative gearing and capital gains tax concessions. But until changes like these are made, the property industry will continue to try to muddy the debate with myths and half-truths, and most ordinary Australians will be the losers.