What can we learn from other countries’ health systems?

Published at The Conversation, Friday 5 September

Health systems in all wealthier countries face similar problems, but their solutions are widely different. That should mean we can learn from other countries. To explore these differences, this week The Conversation published articles on health systems in the United States, Nordic countries, Singapore, England and the Netherlands.

As American political scientist Ted Marmor points out, there is an extraordinary imbalance between the magnitude and speed of the information flows about what is happening in other countries and the capacity to learn useful lessons from them.

The reasons for this imbalance include culture, the “not invented here” syndrome, and the fact that the preconditions that allowed policy change in one place might not apply elsewhere.

Australia starts from a good place

From the Australian perspective, we have to be careful what we pick and choose. As my introduction to this series shows, Australia’s health system stacks up well in international comparisons, at least on measures of cost and life expectancy. 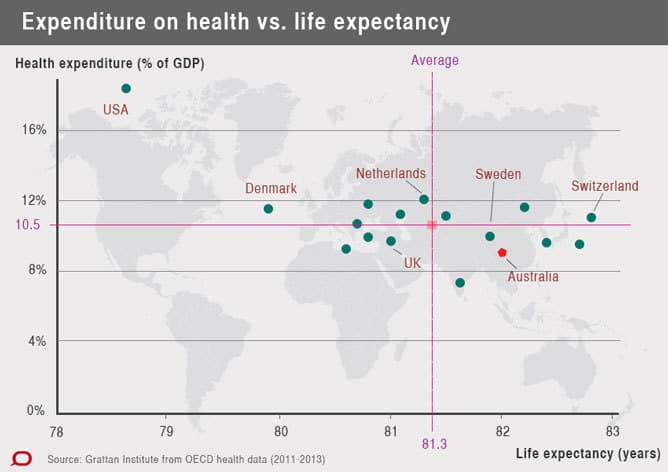 Not one comparable country performs better than Australia on the critical dimension of cost. Only one, Switzerland, is better on life expectancy but it is much worse on cost.

Overseas experiences can tell you a lot about what not to do, as Lesley Russell argues in her piece on the United States. Yet even the US, the poorest performing health system among advanced economies, can offer lessons.

Activity-based funding, adopted nationally as a way of making Australian public hospitals more efficient, was imported from the United States where it has been used for that country’s Medicare system for three decades.

However, significant modifications to key design elements were required so the US system would be fit for purpose in the quite different Australian health system.

Similarly, Australia’s Medicare system was modelled on Canada’s, again with modifications, and there’s much to be learnt from New Zealand’s pharmacy pricing. Other ideas have been picked up from other countries.

It is in wholesale transplantations that problems arise. Sure, Singapore’s health system is cheaper than Australia’s, but its Medisave scheme relies on key aspects of Singaporean culture, including family responsibility, and Singapore does not have the same welfare state tradition as other wealthy countries.

The Dutch experience with managed competition is also held up as a model to get us out of the mess of muddled governance that characterises the Australian health system.

Yet the Netherlands spends considerably more on health care than Australia does as a share of gross domestic product. And its health share of GDP has increased much faster than Australia’s has over the last decade. Whether managed competition will change these metrics is still unknown.

What can we take away from the experience of other countries? Poor aggregate system performance may hide hidden gems we can learn from. After all, activity-based funding and workforce role innovation came from the United States.

Second, we can also learn what not to do from other countries. Again, the US, with its heavy reliance on the inflationary administrative cost overlay from private insurance, provides a good example.

England’s story, with its periodic “redisorganisations”, and problematic implementation of a pay for performance system for general practitioners also provides a cautionary tale.

Third, while Australia’s health system is good, it’s not perfect. There is currently a huge debate about co-payments in Australia, perhaps we can learn from the Nordic experience about regulated fees and out-of-pocket costs.

Recognition of other ways of doing things opens our eyes to the potential of experimentation and innovation, characteristics that will be important over the next decade as we face challenges from the increased prevalence of chronic disease.