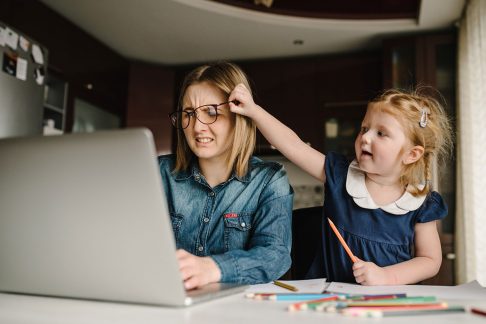 Why cheaper childcare is good economics

Labor went bold in its budget reply with a plan for cheaper childcare and a long-term vision for a universal system. While it is an important social policy, it is arguably an even more important economic reform.

Labor plans to increase the maximum Child Care Subsidy from 85 per cent to 90 per cent, slow down the rate at which the subsidy tapers off, and remove the annual cap. These changes would make childcare more affordable for almost every family using it.

Australia’s out-of-pocket childcare costs are high by international standards, and half of Australians with children under 5 say they struggle with the cost of childcare.

The government stresses that 70 per cent of families have out-of-pocket costs of less than $5 an hour per child for centre-based care. But $5 an hour translates to about $50 a day, $250 a week, or $13,000 a year for each child in full-time care. We estimate that under Labor’s plans more than half of families will pay less than $20 a day per child.

Our analysis showed that across the income distribution, mothers lose 80 per cent, 90 per cent and even 100 per cent of their take-home pay from working a fourth or fifth day after the additional childcare costs, clawback of the childcare subsidy, and tax and benefit changes are factored in.

Unsurprisingly, not many find the option of working for free or close to it particularly attractive. The “1.5 earner” model has become the norm in Australia. And our rates of part-time work for women are third-highest in the OECD.

Childcare costs are the biggest contributor to these “workforce disincentives“. The maximum subsidy is not high enough for low-income families, and the steep taper and annual cap limit incentives to work beyond three days, across the income spectrum.

Labor’s plan would reduce the disincentives substantially. We estimate that it would increase hours worked by “second earners” – mainly women in two- income households and single parents – by 11 per cent, and this higher participation would provide a GDP boost of more than double the additional cost.

Our report found that a policy similar to Labor’s (but with a higher base subsidy) would boost the lifetime earnings of a woman with children on average by $150,000 through increased workforce participation.

Labor’s plan envisages eventually going further. It wants the Productivity Commission to review a move to universal childcare (a 90 per cent subsidy for all).

Our work suggests universal childcare would have an even bigger economic dividend, but would also be substantially more expensive. A 90 per cent universal subsidy would cost about $10 billion a year, and boost GDP by a whopping $24 billion a year. It can’t happen overnight, though. Universal childcare would probably lead to a significant increase in demand, so the sector would need time to grow. Introducing a lower, means-tested out-of-pocket cost is a sensible transition path.

The biggest challenge with universal childcare is likely to be political. Moving from a means-tested scheme to a universal scheme means higher-income families will get the biggest increase in support. High-income families that currently receive no subsidy would suddenly be eligible for tens of thousands of dollars in additional childcare support.

Labor can rightly point to school education and healthcare as universal schemes with broad public support. Universality creates “buy in” and support for important services. It would also dramatically simplify the system – something parents would no doubt celebrate.

But there is a fair debate to be had about the private benefits of returns to working more and whether those with greater capacity to pay should make more of a contribution.

Labor’s short-term plan is much less contentious. In the context of a “blokey” budget focused on job creation in hard-hat industries such as transport infrastructure, construction and manufacturing, a plan for women’s workforce participation is welcome.

Public funding for childcare also means direct job creation for early education and care workers – more than 90 per cent of whom are women.

The government made significant reforms to the Child Care Subsidy in 2018, and had planned to review the system in 2020 before COVID-19 came along. The Labor plan to make childcare cheaper will deliver big economic and social dividends. It merits bipartisan support, because it is good for children, good for women’s workforce participation and good for the economy. It is the policy we need for these times.