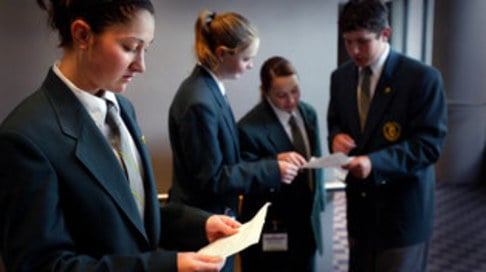 Why we must debate Canberra’s role in schools

Second, the opposition made it clear it will be less interventionist than the ALP in school education, emphasising the role of the states in running schools.

Third, Victoria signed up to the new Better Schools (previously known as Gonski) funding deal, only after gaining assurances that federal interventions in schools there would not increase.

School education is a difficult area for serious debate in federal politics. It’s true serious issues are discussed: curriculum, pedagogy, teacher policy, school evaluation, autonomy and so on. But too often these debates take place in a vacuum that ignores the reality of who runs schools. The federal government does not own or operate one school. It does not hire or fire one teacher. It does not evaluate or develop teachers or school principals. It does not set governance or management arrangements. It has no direct levers to improve schools; they belong to the states. Yet school education will be an important issue in this election.

This contradiction has important implications for developing effective policy but it generally has been ignored.

The federal government will continue to intervene in school education because voters demand it. Also, because the commonwealth spends about one-third of all public funds in school education (at least before the latest funding deals have come into play), it will always want something for its investment.

But more important than arguing about the level of its funding, we need to discuss how the government can be most effective. Most agree it should help to hold states and non-government sectors accountable for how they run their schools. At present it does so by making National Assessment Program – Literacy and Numeracy results and other outcome measures transparent. But should it intervene if NAPLAN results slide? If so, when and how?

And what of the government’s role in encouraging uniformity across state education systems? Present policy is that standards and curriculum should align in some instances, with examples always made of the difficulties faced by families who move interstate and have to adjust to new regimes. But is greater uniformity good for all students?

NSW is often seen as a leader in curriculum development. Should its curriculum be changed to make it more like other jurisdictions?

Victoria achieves results similar to NSW but spends significantly less per student. The latest federal funding deal increases the amount Victoria spends to align it more closely with the other states. Is this a good thing, if Victoria is already achieving high results while spending less?

In contrast, reform in other policy areas tries to increase interstate competition and state-based innovations to drive improvements and more productive expenditure.

When the government does intervene, how can it be most effective? The new funding agreement requires that all teachers have annual performance reviews and schools publish their improvement plans. The federal opposition wants to increase the amount of direct instruction in classrooms. No one disagrees that these areas are important for reform but does the government help or hinder by intervening in them?

Of course, it is never black and white. A federal framework can ensure consistency while allowing states to develop their own schooling. But there is a huge grey area in school education policy that would benefit from a full debate outside the heat of an election campaign.

Regardless of who wins the election, greater clarity on what governments at all levels can and cannot achieve could be an important step to improve education policies.