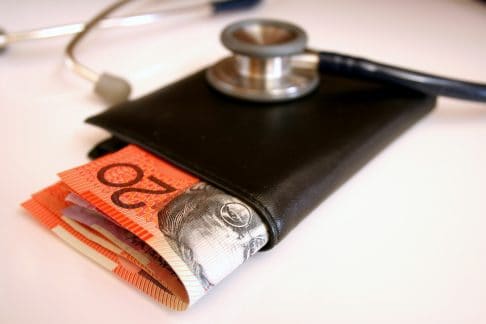 Published by The Guardian, Tuesday 8 October

Private healthcare is currently subsidised to the tune of $9bn each year – $6bn through a government rebate that reduces the cost of private health insurance premiums, and a further $3bn for rebates against the cost of medical bills for private inpatients. The latest ask from the industry is on top of that.

The problems the industry faces are real. Young people don’t think the premiums they are being asked to pay – even after the rebate – are worth it. And they are right. The current premium for a 25-year-old is almost double what an actuarially fair premium would be.

The latest proposal put forward by the private health insurance industry involves an increased rebate subsidy for young people, as well as a tax break to encourage employers to offer private health insurance to younger employees. The design of the proposed handout – a reduction in fringe benefits tax payments – is an attempt to reduce the apparent cost to government, pretending that a reduction in future government revenue is somehow not a real cost.

Firstly, it encourages industry dependence on government to fix its problems, contrary to good industry practice and the advice from the regulator that the industry should stand on its own two feet.

Secondly, at a cost of $1.2bn, the bid is not affordable at a time when the government is committed to a return to budget surpluses.

The solution to the Australian industry’s woes is not more taxpayer largesse, but a concerted effort to tackle underlying industry dynamics. As the health minister, Greg Hunt, has identified, the industry needs to become more efficient. This proposal from the private health insurance industry lobby does nothing to address any aspect of efficiency, avoids fixing the underlying problem, and so does not represent a long-term solution.

Private health insurance providers are not the only part of the private healthcare juggernaut wanting to shift their problems on to the taxpayer or other parts of the industry. 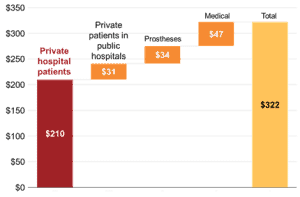 Private hospitals accounted for about two thirds of the after-inflation increases in health insurance benefit payouts over the past decade (see figure). Improving private hospital efficiency has to be on the agenda. Yet in a media release last week, the private hospitals’ lobby group showed it is still in denial mode, rejecting claims that private hospital costs are going up rapidly.

More innovatively, the medical device suppliers’ lobby group, responsible for about 10% of real pay-out growth in the past decade, commissioned hired guns to write a report telling government to look everywhere else for savings except in their patch.

Meanwhile private doctors, responsible for about 14% of the pay-out growth, have issued a pamphlet telling patients they need to fix the problem of a few greedy doctors charging too much.

The industry is fiddling while its platform is burning. Every part of the sector is spouting the lie that it has no responsibility for confronting the industry’s woes.

These problems will continue to get worse unless there is policy action. Surely it is time for the industry to grow up and tackle its problems itself.