This selection of works covers some of the most topical issues of 2020 — coronavirus, climate change, Aboriginal lives matter, refugees and migration, female workforce participation, and recession — all in personal and powerful ways.

How the dark gets in, Clare Wright, Meanjin

We’ve chosen these diverse works for their readability and relevance to Australian public policy. As always, it was a rigorous selection process: the Grattan staff book club considered well over 100 Australian and international books, essays, papers, and reports.

CEO Danielle Wood says: “These works touch on important and difficult challenges for Australia and our government – climate change, building a more resilient economy, and reconciling with Indigenous communities. But they also offer hope. All shed on a light on a way forward, whether through the power of public policy, building communities, or through the actions of individuals, friends and families.”

While these books will be delivered to The Lodge for Scott Morrison’s reading pleasure, we recommend them to all Australians, as engaging reads for the holiday break.

In addition to our main reading list, our annual “Wonks’ List” highlights some of the year’s best technical policy reads, for anyone who wants to take a deeper dive.

What our staff thought about the selected works 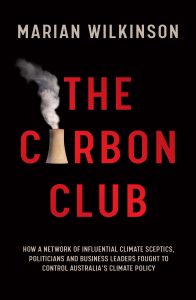 Climate change policy has been the most intractable Australian policy debate of our lifetimes. Marian Wilkinson’s The Carbon Club shows why.

Genuine concern about the impact of climate action on jobs and economic prosperity has been magnified by vested interests with a lot to lose from a move away from fossil fuels. Throw into the mix a handful of climate-sceptic scientists and think tanks to cast doubt on the science and provide intellectual cover, and a few savvy politicians who wield their scepticism as an ideological sword, and you have a potent force that has made it impossible for any Australian government to chart a way forward.

Marian Wilkinson takes us into the trenches of this debate over the past 25 years. Part forensic history, part reflection from those on the frontline, The Carbon Club is required reading for anyone who wants to understand how Australia arrived in 2020 with such a confused climate policy agenda. Even those that have followed the climate debates closely will find new details and long-forgotten twists in Wilkinson’s account.

But perhaps the most striking thing to emerge from laying the history bare is exactly how much this debate has chased its own tail for the best part of three decades. The impact of action on coal communities, the effects on power bills, and hope that technology will deliver an easy answer have been recurring tropes. Yet, we seem no closer to finding a way through.

And while the politics runs in circles, the climate has continued warming. The three chapters weaved though the book on the damage to the Great Barrier Reef – and efforts to play down that damage – are devastating reading.

What would our grandchildren think if they were to pick up Wilkinson’s book in another three decades? It’s not a pleasant thought. But maybe in helping us understand the history of Australia’s climate inaction, Wilkinson has given us the tools to stop history repeating. 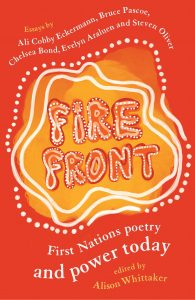 Fire Front is an anthology of Indigenous poetry, the confluence of activism, political struggle, and aesthetic verse. This ‘collective memory’ of poems spanning decades and generations is titled after the raging bushfires that swept the continent last summer. But the title references much more than the fires: it alludes to power, to collective action, of the ferocity of words.  Editor Alison Whittaker notes that after producing the work through the bushfire season, ‘We chose to keep the name, so we wouldn’t forget two things: what the words of Aboriginal and Torres Strait Islander poems are and can do, and what their poets stand to lose.’

The book is thematically divided into five sections: the Indigenous relationship to ancestors and history, resisting settlement, speaking out and to each other, loss and healing, and new poetry. Each section is introduced with an essay by a prominent Indigenous public intellectual. Contributors include Dr Chelsea Bond, Evelyn Araluen, Bruce Pascoe, Steven Oliver, and Ali Cobby Eckermann. Both Whittaker and Araluen’s introductions acknowledge English as the language of the coloniser, and the poems include Aboriginal languages, with and without translation.

Fire Front takes a broad definition of poetry – to its benefit – featuring song lyrics and spoken histories. Poetry and power go hand in hand. The capacity to change politics and policy starts with the personal. Fire Front exudes a deep pride in Indigenous culture as it tackles the relationship to country and the impact of climate change and colonisation, intergenerational trauma and the stolen generation. Declan Furber Gillick urges readers to hold a small ritual while reciting his yarn Nanna Emily’s Poem (Mount Isa Cemetery 2014), bringing home the enormous personal and emotional cost of the stolen generation.

Ultimately, the generosity of the authors in sharing their poetry with white readers is yet another step towards reconciliation – and it’s impossible not to engage with this work. As Whittaker writes, First Nations poetry burns – ‘it burns for us’. 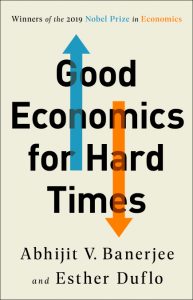 Can economists tell us anything useful about the most pressing problems we face? According to Nobel-prize winning economists Esther Duflo and Abhijit Banerjee, the answer is a resounding yes, but only by rejecting the abstract in favour of the empirical.

Good Economics for Hard Times presents the work of the authors and their contemporaries at the frontier of the data-driven ‘credibility revolution’ in economics.

Each chapter tackles a different topic. Some bring a fresh perspective to ‘traditional’ economic problems, including growth, trade, and welfare. Others offer insights on subjects that economists rarely tackle, including racism, ‘fake news’, and declining trust in political institutions. In each case, the questions posed are ambitious, but the answers offered are modest and practical.

The book is deliberately written in a style that ‘human beings can read’. Duflo and Banerjee achieve the rare feat of making technical material lively and engaging. The result is a rewarding read for economists and laypeople alike.

It is also a decidedly optimistic book, even as it deals with heavy subject matter. The authors remain hopeful that apparently intractable problems can be solved, and that economists can help to solve them. This faith is expressed in the book’s preface as a compelling vision for the economist’s mission:

‘To be hard-headed about the facts, sceptical of slick answers and magic bullets, modest and honest about what we know and understand, and perhaps most importantly, willing to try ideas and solutions and be wrong, as long as it takes us toward the ultimate goal of building a more humane world.’

How the dark gets in, Clare Wright, Meanjin

How the dark gets in invites you into the roaming, unsettled mind of author Clare Wright during Melbourne’s second lockdown. Published in August, at the end of the first week of Stage 4 restrictions, she reflects on the shock of being ‘forced out of our hectic, harried lives and into our homes’.

‘Put simply, L1 was all about the baking; L2 is just cooked… This time, we’re looking beyond the kitchen shelves and into the pantries of our souls.’

Wright is one of Australia’s top historians – and she weaves history through this essay – but this piece is personal. She explores her concerns from the mundane and local (like her neighbour’s Sunday morning leaf blower), to the grand stories we tell ourselves as a nation, and the people we exclude through these narratives.

How the dark gets in offers a fascinating window into the re-locked-down state of mind and the deep dark fears it can unearth. Wright likens the feeling to a horror movie version of Groundhog Day: ‘Immutable, unchanging, with no future possibility of growth or transcendence.’

For those who lived it, we hope this is a therapeutic read and a chance to reflect on the truths it exposed. For others, this beautiful essay shines a light on the experience of millions of Australians in 2020. 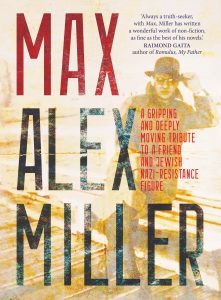 Decorated Australian novelist Alex Miller has belatedly discovered what he calls ‘the magic of the simply true’. Now in his 80s, the two-time Miles Franklin award-winner’s first non-fiction book has been worth the wait.

Max is the story of his friend Max Blatt, a German/Polish Jew and leader of the Nazi resistance who was hunted down and tortured by the Gestapo before escaping, first to China and ultimately to Australia.

Or, perhaps more accurately, Max is the story of Alex’s posthumous search for Max’s elusive story. For despite their enduring and enriching friendship – Alex credits Max with lending him the courage to become a writer – the novelist always sensed there was much he did not know about his muse, ‘a man whose past had been concealed within a deep silence’.

The man Alex befriended in Melbourne after the war was talented, wise, cultured – and broken. The horrors he and his family had suffered at the hands of the Nazis were unspeakable – and so he never spoke of them. Having lost faith in the human project, Max was ‘a refugee not only from his country but also from himself’.

Haunted by a falling out – or perhaps more a drifting away – that meant he didn’t see Max in the last two years of his life and didn’t attend his funeral, Alex is driven to discover more about his hero, ‘to piece together those old shards of memory’.

What follows is a five-year journey of discovery, not just about the achingly sad life of Max Blatt but about the mysteries of memory and the limits of truth.

Max transports the reader from Acland Street in Melbourne’s St Kilda to the Lower Galilee in northern Israel and, inevitably, Auschwitz in southern Poland. We get to read Max’s Gestapo files, including the one in 1939 that placed him on their most-wanted list. And we get to read some of Max’s wartime letters to friends and comrades across Europe, and to his sole surviving sibling, Martin.

Sometimes, as he slowly discovers more, Alex agonises about whether he should have left the past alone. In breaking the seal on Max’s death, was he committing a kind of betrayal?

Max is part biography but also part autobiography. On his search for Max Blatt, Alex Miller discovered a little about himself, and a lot about the things that really matter – life and love, friendship and family. 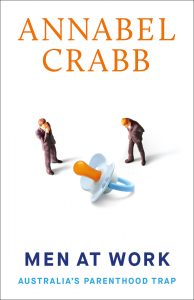 Annabel Crabb rectified this omission and quizzed Australia’s Prime Minister and Treasurer on how they juggle their jobs with their young children. Revealingly, their answers were all about coping emotionally with absence, not coping practically with the day-to-day realities of children (‘Who does school pick-ups? Who remembers to take them to the dentist? What happens when they’re sick?’). Clearly, most of us assume that a father in a high-powered job will be absent, while the children’s mother takes care of the hard parts of parenting.

Over the past century, women have been liberated to enter the world of work in ways they couldn’t before. Now, mothers can work full-time, part-time, or not take on paid work at all.

But as for fathers, social expectations, employer practices, parental leave policies, and even the Sex Discrimination Act all conspire against the increasing numbers of men who want to work less, or flexibly, in order to be more involved with their children.

In Men at Work, Annabel Crabb shows that our failure to liberate men leaves too many women doing it all: ‘…the inability of a father to work flexibly, or leave when he needs to, creates a parallel obligation for someone else – usually a woman – to pick up the slack’. Crabb argues that policies to empower men to take a bigger share of parental leave can foster a more equal division of caring responsibilities and set up habits for life.

While the arguments are data driven, it’s the personal experiences described in Crabb’s trademark prose that really hit home, their familiarity both illuminating and a little uncomfortable, especially for men.