Published in The Conversation, 9 September 2020

Australia is in for a long and damaging economic slump, unless governments inject substantially more fiscal stimulus.

The July budget update forecast that unemployment would hit 9.25% in coming months.

The Treasury now apparently expects it to remain above 6% for the next half-decade.

That would be a disastrously sluggish recovery – as slow as the recovery after the 1990s recession, now widely seen as a failure of economic management.

The performance of the United States after the global financial crisis was no one’s idea of a rapid labour market recovery. Yet that’s what we are drifting towards. 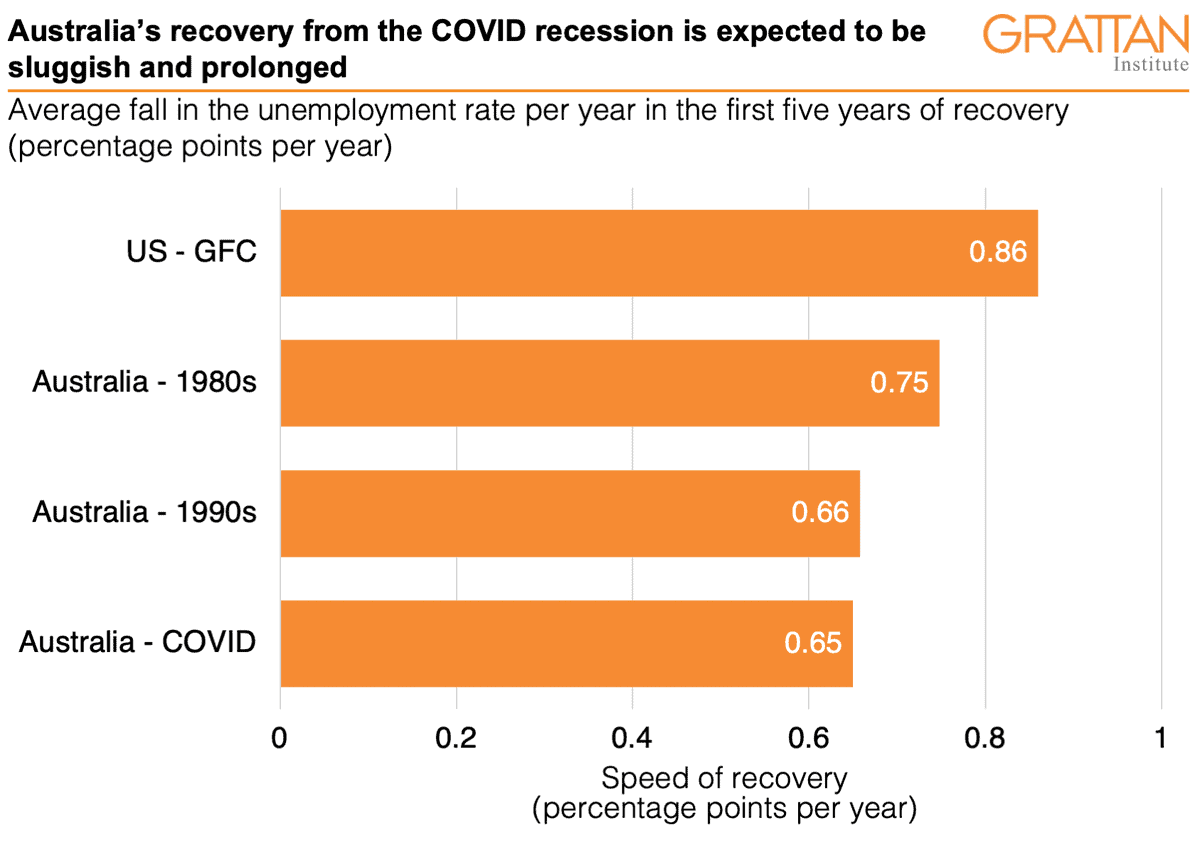 A recession this long and deep would leave ugly scars.

Recent work by officials at the Treasury found that when youth unemployment goes up by 5 percentage points, the wage that new graduates can expect to receive goes down by 8 percentage points, and they’re less likely to get jobs at all.

The effect on graduates’ wages lasts for years.

Over a decade they lose the equivalent of half a year’s salary compared to otherwise similar young people who graduated in more benign conditions. 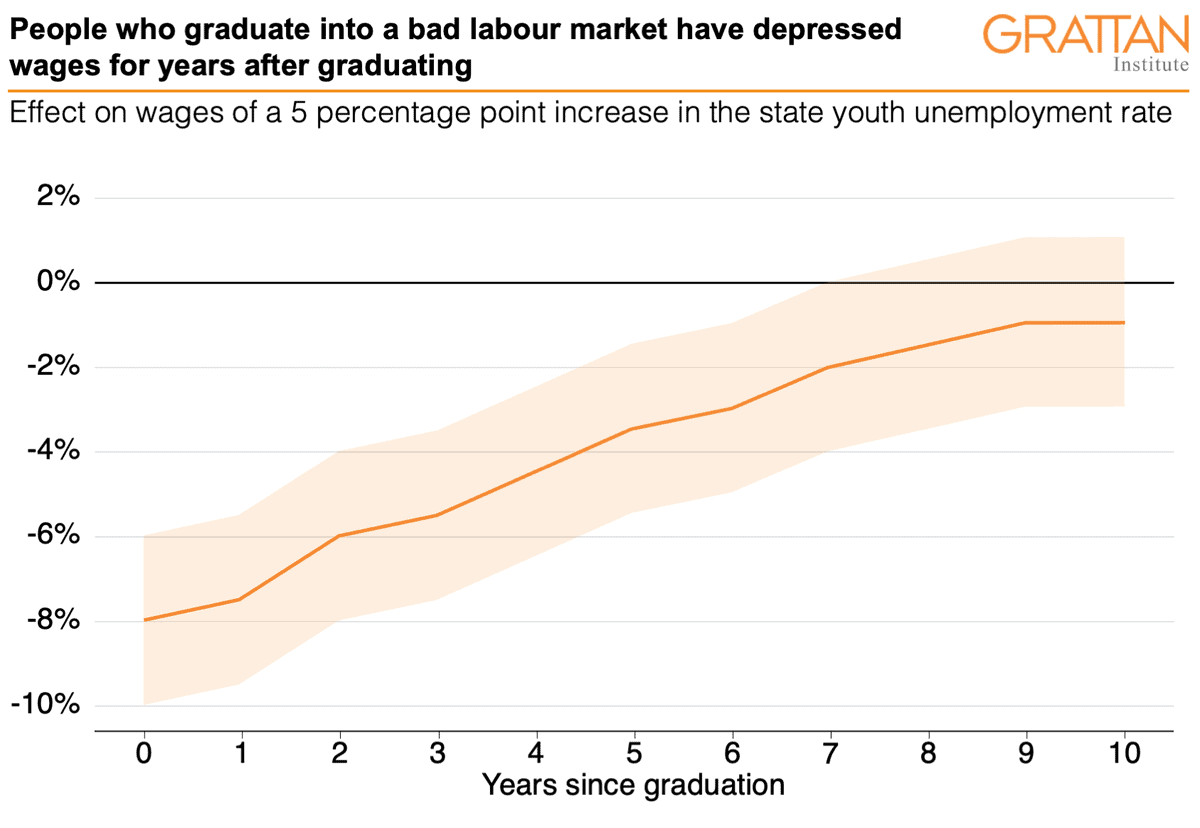 A Productivity Commission staff working paper came to a similar conclusion: economic downturns have big and long-lasting effects, particularly on young people unlucky enough to be entering the job market during and after them.

But the Treasury study finds the worst can be avoided if unemployment falls quickly.

For instance, if unemployment returns to pre-recession levels within three years, the hit to young workers’ wages over the following decade almost halves.

Getting unemployment down quickly will cost money

Faced with this scenario – a long and deep recession with sluggish recovery – governments ought to do everything in their power to stimulate the economy.

The Reserve Bank can and should do more, but by itself it can’t do enough. The Commonwealth government has to step up, spending what is needed.

It acted quickly and commendably to support households and businesses through the acute crisis period. Its actions weren’t perfect, but helped turn what was set to be an unprecedented catastrophe into something more like a conventional terrible recession.

But the spending taps look set to be turned off in the coming months, as the emergency support is withdrawn in accordance with a schedule approved by parliament last week.

More – much more – government support is going to be needed over the months and years ahead.

In June, the Grattan Institute called for additional fiscal stimulus of about $70-to-$90 billion over the next two years.

Those numbers now look too small.

Based on the updated Reserve Bank forecasts, we now estimate than an extra stimulus of $100-to-$120 billion will be needed. 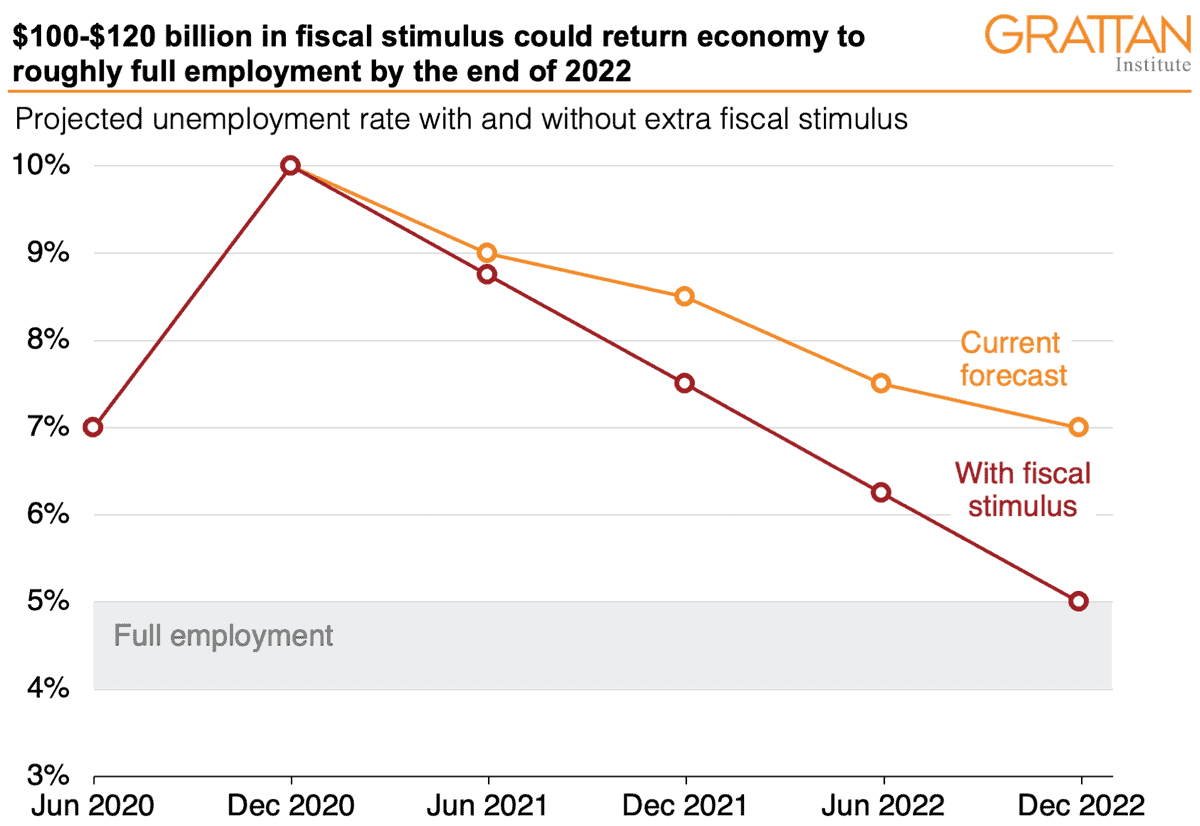 Our calculations suggest that would be enough to cut the unemployment rate by about two percentage points beyond where it would otherwise fall to by the end of 2022.

It would bring unemployment back down to around 5% rather than 7%.

Five per cent is around the level the Reserve Bank believes is needed to get wages growing again.

Australians should not settle for a prolonged slump, with the scarring and misery it would bring.

Our leaders should prepare a plan now to get unemployment down as quickly as possible.

The budget is due in four weeks, on October 6.

The Reserve Bank’s forecasts point to economic policy failure. It’s not too late to spend, and spend big, to avoid it.