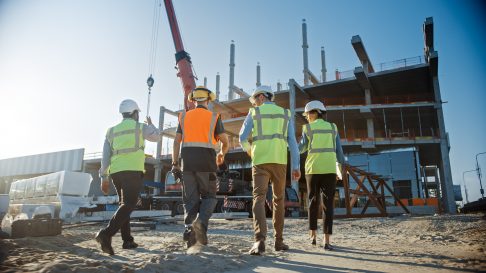 It’s one of the most predictable political images of all: men in hard hats on construction sites, shovelling us out of recession.

If that’s your image, the federal budget would not have disappointed, with its step-up in spending on roads and rail to provide economic stimulus and create jobs.

But if you were really focused on stimulus and jobs, you would not reach for new infrastructure. There’s a much more pressing need in maintaining the roads and rail we’ve already got.

The newly announced transport spending amounts to $11.5 billion this year, about 1.5 times what had been anticipated in last year’s budget. There’s even more next year and for each of the following two years. It’s an increase from approximately 0.4 per cent of gross domestic product to 0.6 per cent.

The funding is being given to states to spend quickly, and if they don’t spend it quickly enough, they’ll lose it.

The projects include a mix of the small, such as $15 million for the ACT’s Monaro Highway upgrade, and the large, such as Queensland’s $750 million Coomera Connector stage one, and $600 million each for sections of NSW’s New England and Newell highways.

The new projects go into an already crowded market.

Even before the pandemic, the amount of transport construction work in progress for Australia governments was at an all-time high – about $100 billion worth of projects worth $20 million or more two years ago, and close to $125 billion by March this year.

Since 2016, governments signed up to 29 projects worth $500 million or more, but only six of them had a business case in place.

With such a boom in progress, it’s little wonder the construction industry has got off relatively lightly.

It suffered job losses of 5.3 per cent between March and September; this is clearly very tough for those affected, but it’s nothing like the scale of job losses in hospitality, at 22 per cent, in arts and recreation, at 14 per cent, or in agriculture or transport, at 9 per cent each.

The bulging pipeline of infrastructure pre-pandemic was all about population growth. More people means more urban congestion and more pressure on ports and airports.

But population growth has fallen off a cliff. Net overseas migration is expected to be negative this year and next, and the national birth rate is the lowest on record and expected to fall further.

While the budget papers show the government hopes migrants will return in 2023-24, the reality is that we don’t know whether declining population growth is a blip or a trend.

Meanwhile, there is a pressing infrastructure need right before us.

The mounting maintenance backlog is a major challenge. A historical underspend on maintenance has contributed to a backlog across all infrastructure sectors, which will erode the quality and reliability of many assets and lead to higher costs for future asset maintenance and renewal.

A lack of data and inadequate reporting of the problem haven’t helped.

Of course, some will argue that in a recession the quality of the spending doesn’t matter as much as usual, and that infrastructure is still worthwhile because it adds to the productive capacity of the economy down the track.

Those people are wrong, for two reasons. One is that it’s not a foregone conclusion that a public infrastructure project is effective stimulus. Details really matter, and the larger projects on the agenda typically have lower short-run multipliers because they take a long time to get going.

And the second reason is that Australian governments never show much sign of worrying about the quality of the infrastructure spend, whatever the state of the economy. Since 2016, governments signed up to 29 projects worth $500 million or more, but only six of them had a business case in place at the time of the commitment.

Politicians don’t know and seemingly don’t greatly care whether it’s in the community’s interest to build these mega-projects.

Australia is in the midst of a massive transport infrastructure building program. Even though the Australian government underspent by $1.7 billion on roads and rail last year, it still plans to increase the allocation by 50 per cent this year.

It’s hard to see how that isn’t going to push up prices in a crowded market, especially once the pandemic-related workplace restrictions are eased.

And, meanwhile, the condition of many assets is unknown, and the maintenance backlog is serious.

This is a productivity opportunity that’s urgently needed and shovel-ready. Yet it’s languishing without a champion.