Economics has a women problem. Here's why you should care - Grattan Institute

Economics has a women problem. Here's why you should care

Published by Power to Persuade, Monday 7 May

Economic leadership positions in Australia remain an almost exclusively male affair. Indeed, the glass ceiling for economic roles has been proved more impenetrable than most. We’ve had a female Prime Minister but not Treasurer, a female CEO of a Big 4 bank but not a Chief Economist, and a female Chief Scientist but never a female at the helm of the Treasury, Productivity Commission, ASIC, APRA or the ACCC.

The ‘women problem’ in economics matters because economics is central to major government and business decisions. How much governments tax and spend, the level of interest rates, the design of policies to tackle climate change and regulate business conduct – all are decisions made by, or at least highly informed by, economists. In the private sector, forecasts of economic activity, exchange rates, and future demand and supply of goods and services can drive billion-dollar investment programs. These decisions have a big impact on the lives of all Australians.

So why should we aim to have more women at the table?

First, study after study has demonstrated that more diverse teams make better decisions. In contrast, groups of ‘like’ individuals – in terms of gender, race, age and class – perform poorly because of their narrow range of perspectives and because they are more likely to lapse into ‘group think’ where bad ideas go unchallenged.

In economics, gender has been shown to influence perspectives on thorny policy questions. A survey of professional economists in the United States revealed no significant differences in the views between men and women in relation to economic methodology or approach, but large differences on policy judgements. For example, after taking account of differences in employment and length of experience, women were 32 percentage points more likely to agree that income should be distributed more equally, 20 percentage points less likely to say that regulation was excessive, and 14 percentage points more likely to believe government was either “too small” or “much too small”.

The policy issue that divided men and women most was the gender pay gap: women were 51 percentage points less likely to believe that choices and productivity differences accounted for most of the gap. Similarly, in Australia, the Economic Society asked its National Economic Panel – a 50-strong panel of top economists – whether government should intervene to address occupational gender segregation. While most males and females who responded agreed with the proposition, female panellists were more likely to respond and to be more confident in their response.

It seems reasonable to speculate that policy choices on these fronts might look different if there were more women in decision-making roles.

Second, role models matter. I am struck by the number of female economists who feel the absence of females, particularly prominent ones, to provide inspiration and guidance on career paths.

The absence of role models starts early. Even some recent economics graduates report they went through their whole degree without encountering a single female lecturer. And even when students do come across female academics, they are less likely to be at senior levels. Research conducted for the Economic Society of Australia in 2016 found that only 33 per cent of lecturers and senior lecturers in economics were female, and only 15 per cent of Professors and Associate Professors. 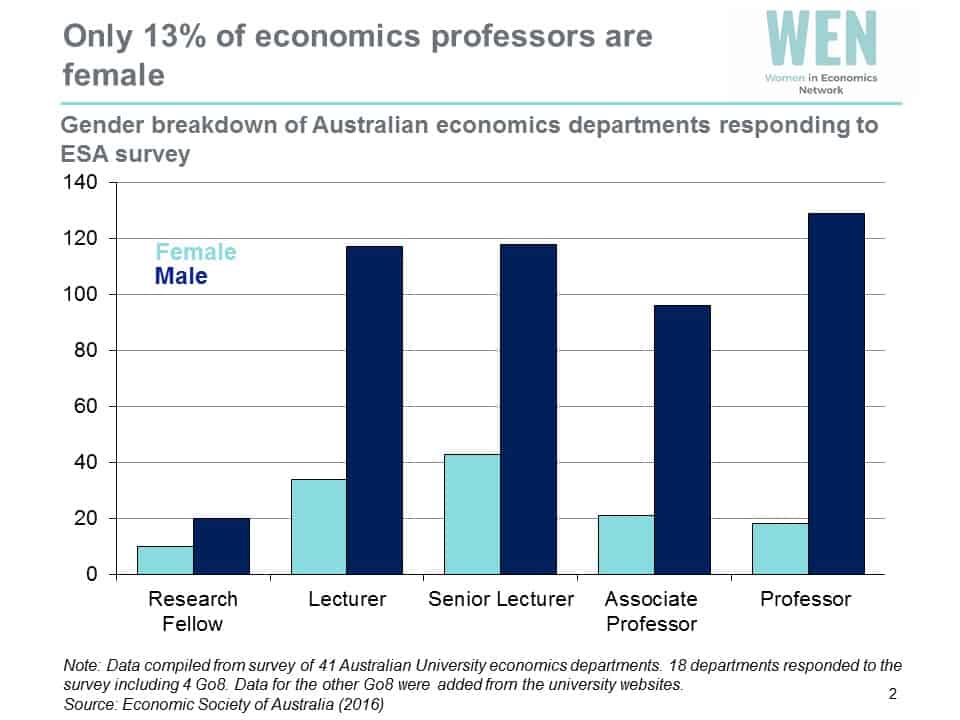 Female economists are similarly invisible in the public sphere. A 2016 Women for Media Report showed that of the people cited as “analyst” or “economist” in major Australian newspapers, just 9 per cent were women. This was lower than the percentage of women cited with the position of CEO or Chair. My own survey of newspaper opinion pages showed that only 12 per cent of opinion pieces in The Australian Financial Review over a six-month period in 2016 were written by women. The predominance of men talking economics in the media reinforces the notion that economic policy is a male domain. 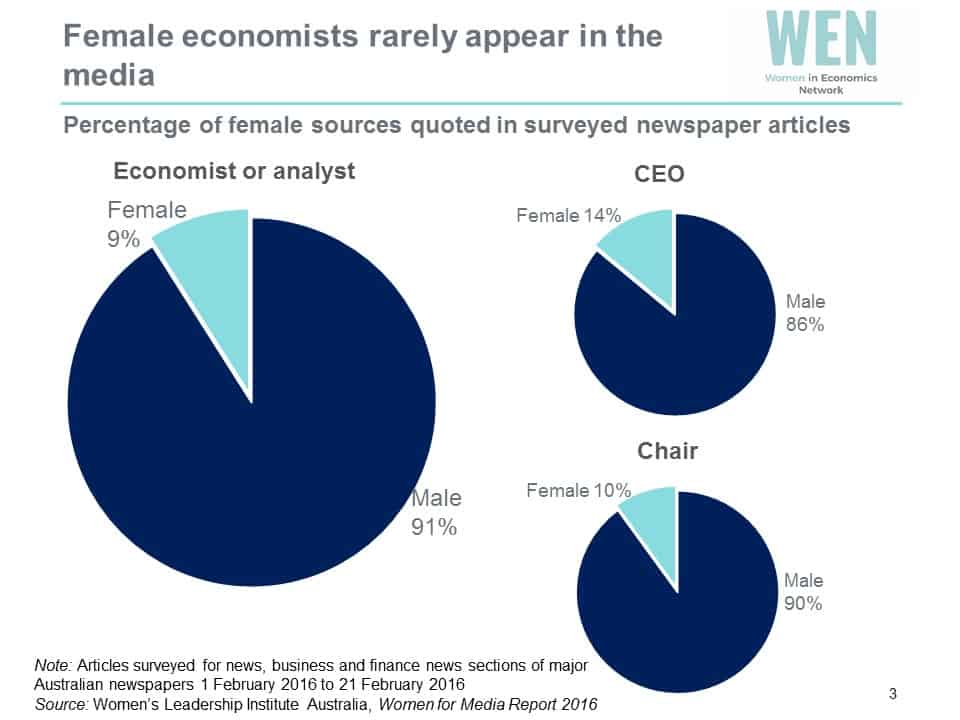 Given the face of the profession is overwhelmingly male, is it any wonder that fewer women than men study economics and more drop out along the way? This means Australia is missing some of the best and brightest who would otherwise be helping us make better policy and business decisions. 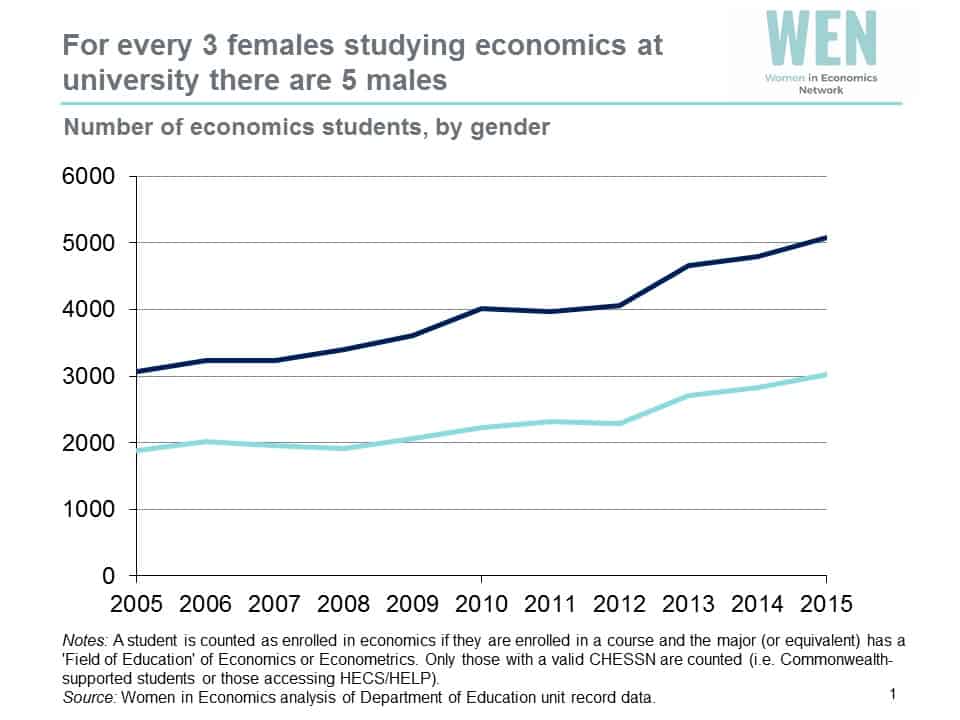 Steps in the right direction

But people are starting to take notice of these issues. Reserve Bank head Philip Lowe, federal Labor Treasury spokesman Chris Bowen, and the secretary of the Department of Prime Minister and Cabinet and former Treasury head Martin Parkinson are all persuasive advocates for improving the gender balance in economic leadership roles. The Reserve Bank of Australia offers resources to encourage more young people, especially women, to study economics, and celebrates leading female economists working in a diverse range of roles. And the Women in Economics Network – formed just over a year ago by the Economic Society of Australia – has several initiatives designed to attract and retain women at every stage of the career pipelines.

Let’s hope it’s enough to make a difference. Cultural change is difficult, but getting this one right matters not just for the economics profession but for the quality of Australia’s future economic decision-making.