Election FactCheck: Has public infrastructure investment fallen 20% under the Coalition?

Published at The Conversation, Tuesday 31 May

Infrastructure spending is never far from the headlines, especially during an election campaign.

But was Labor right to say in a tweet that public sector infrastructure investment has fallen 20% under the Abbott-Turnbull government?

When asked for sources on this claim on Twitter, a Labor spokesperson referred The Conversation to engineering construction data from the Australian Bureau of Statistics between the September quarter of 2013 (when the Coalition government was elected) and September 2015.

To start with, this claim is out of date.

The number quoted in a press release issued by the shadow minister for infrastructure, Anthony Albanese, was correct when he first went public with this claim, in January 2016.

At the time of the above tweet, it reflected figures from the ABS’ September 2015 report(released 13 January). But those figures were out of date by the time the tweet was issued on May 3. The December 2015 report was released on March 30.

Is the decrease attributable to the Coalition?

The second question is whether this is really driven by the Coalition government, as the tweet implies.

For one thing, it could be argued there is a lag between a new government being sworn in and a significant impact on infrastructure work done. The Coalition government didn’t release a budget until May 2014, but from the chart we have constructed below it is clear that engineering work had begun to decline in late 2012. 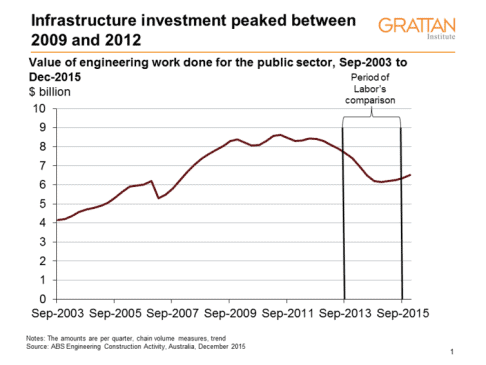 By September 2013, public sector engineering work had already declined 9% over the past year. The change of government has certainly not halted the decline in infrastructure spending, but the decline began under Labor.

Who else is responsible for public sector infrastructure?

It’s also inaccurate to lay the full decline in infrastructure investment at the door of the federal government of the day. 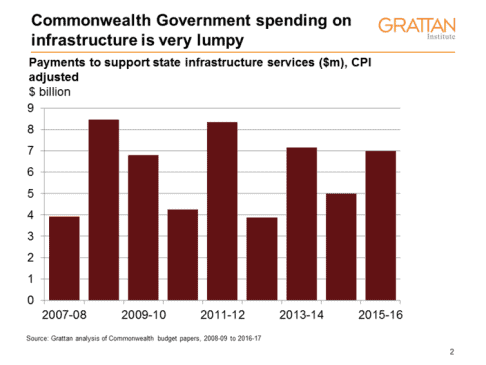 An alternative assessment of infrastructure trends under the Coalition government is to look at the first two Coalition budget years (2014-15 and 2015-16) against the two preceding financial years. This gives an overall increase of 9% in real terms.

Given the lumpiness of spending, however, it is difficult to make any sensible conclusion about the trend in federal infrastructure investment based on this number alone.

Labor’s tweet was inaccurate. The ABS figures on which Labor had sourced its information were up to date in January 2016 but out of date by the time the tweet was issued in May.

It is also an exaggeration to link an overall decrease in public infrastructure investment to the federal government, given its relatively small share of spending in this area.