A key feature of next week’s ‘women-friendly’ federal Budget will be a new policy to make childcare cheaper and boost women’s workforce participation.

But the devil will be in the detail. This article explains how the new policy will work, what it actually means for families and the economy, and how it compares to Labor’s policy.

The Coalition’s policy will increase spending on the childcare subsidy, from July next year: an extra $1.7 billion over three years, about a 6 per cent increase on the current investment.

First, it drops the annual cap. Under the current system, families earning more than $189,390 have their total subsidy capped at $10,560 per child per year. Once families hit the cap – generally if they have their children in care for four or more days a week – they pay the full cost of care. These costs are often prohibitive and the cap is a big disincentive for women with high-earning partners to work more than three days a week.

Second, it will boost the subsidy for second and subsequent children in care by up to 30 percentage points (capped at 95%). These new arrangements will apply for children under 6. This will reduce fees for families paying some of the highest out-of-pocket childcare care costs – those with multiple children in long day care.

So how does it work? Let’s take a middle-income family with two young children paying average day care costs of $110 a day per child. They are currently eligible for a 60% subsidy for both children, so they pay $88 a day and the government pays $132. Under the new policy, the subsidy would rise to 90% for the second child, meaning they will in future pay $55 a day for both children and get a $165 subsidy. This family would be $132 a week better off if they have the children in care for four days.

What will it mean for women’s workforce participation and family budgets?

Currently, for families with two children in long day care, mothers can lose 80, 90, or even 100% of their take-home pay in the move to take a fourth or fifth days’ work, with childcare costs on those additional days being the main contributor. The new policy reduces the disincentives for those families.

As Figure 1 shows, in a family where the father earns $60,000 and the mother would earn the same if she worked full time, the second earner loses 90% of what she earns on her fourth day and more than 100% on the fifth day. Under the new policy, the workforce disincentive rates (WDRs) are lowered, so she will now lose 75% on the fourth day and 90% on the fifth day. The family will gain an extra $5,000 a year if the second earner works four days, or an extra $7,500 a year if she works full-time (Figure 2). 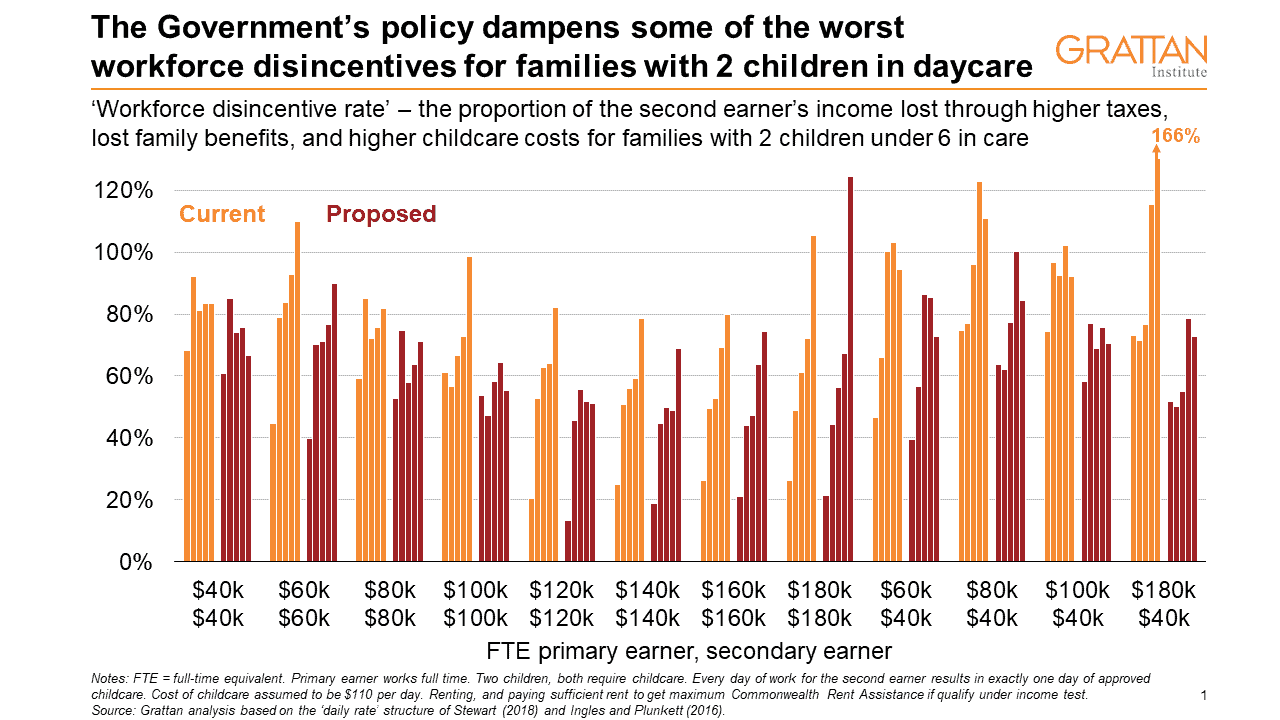 For a family where both parents have the potential to earn $100,000, current workforce disincentive rates of 100% on the fifth day would almost halve to 55% under the new policy. This is because the family benefits from both the extra subsidy for the second child and the removal of the annual cap.

Workforce disincentives remain high, even with the new policy – much higher than the top marginal tax rate at 45%, for example. But it is a significant improvement on the status quo.

The flip-side of a targeted policy is that it only benefits a small segment of families. On the Government’s numbers, up to 270,000 families might benefit. This compares to almost 1 million families currently accessing some subsidised childcare support and many more who would like to access it if they could afford it.

Labor announced its childcare policy in the budget reply last year. Like the Coalition’s, it is scheduled to begin from 1 July next year. Like the Coalition’s, it removes the annual cap. But it also increases the base subsidy (for all children) to 90 per cent and reduces the ‘steepness’ of the means test taper – one of the big contributors to growing out-of-pocket costs as mothers work more and use more childcare.

This means that Labor’s policy is broader, with all families who use childcare standing to gain, regardless of the number of children, their age, and the family income.

Labor’s policy would cost about $2 billion per year – roughly three times more than the Coalition’s. But it would also have bigger benefits – bringing down out-of-pocket costs by more across the board and sharpening workforce incentives for a much wider group of families. The impact on economic activity from higher workforce participation is likely to also be about three times bigger under Labor’s policy than the Coalition’s.

In terms of the impact on family budgets, the big difference between the policies is the number of children under 6 in care. 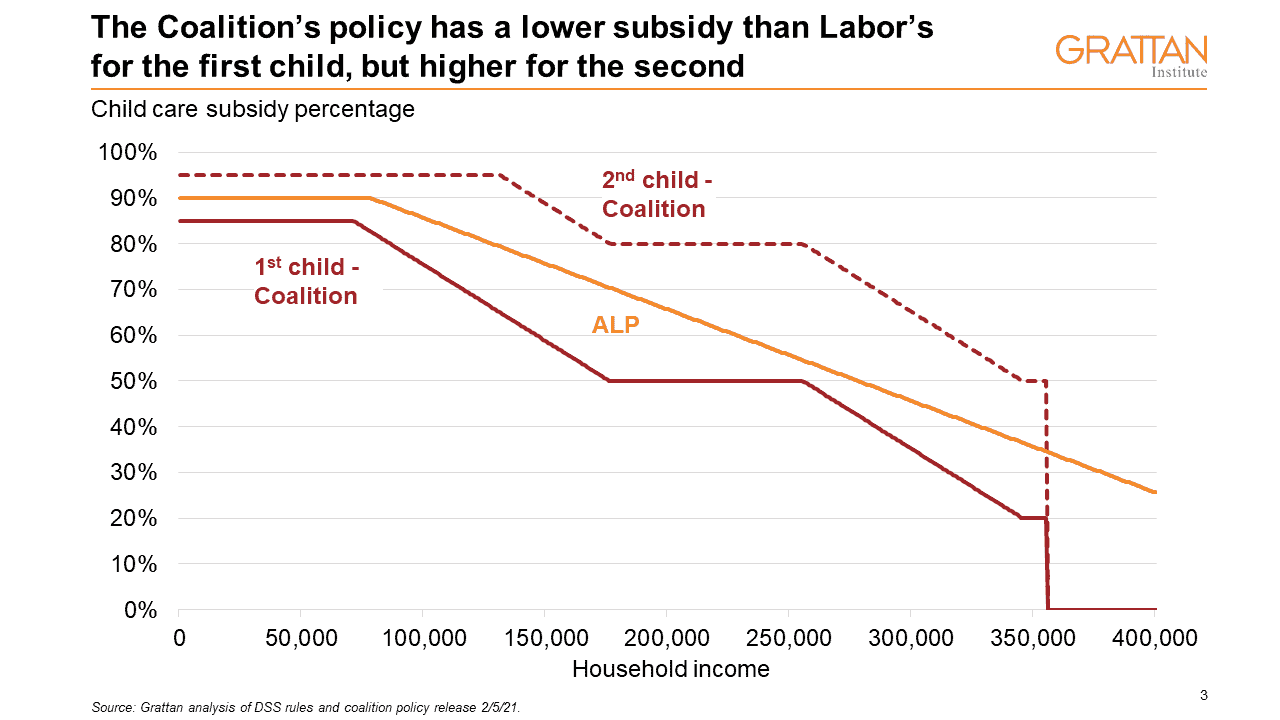 The verdict:  a good step forward, but not a game-changer

Overall, the Coalition’s policy is a helpful and well-targeted package that tackles some of the worst out-of-pocket costs and workforce disincentives. It will mean a real improvement for about 270,000 families.

What’s missing is support for all the other families using childcare – just under 1 million families currently use childcare and many would like to work more if they could afford to do so.

A broader policy that supported more families would have much larger and more widespread economic benefits. Of course it would cost more too, but our research shows that it could be expected to deliver a boost to GDP of at least twice the cost.

The Government’s policy is step in the right direction. But much more needs to be done to create a system that truly supports women’s workforce participation and long-term economic security.