Learning from past mistakes: lessons from the National Rental Affordability Scheme - Grattan Institute

Learning from past mistakes: lessons from the National Rental Affordability Scheme

All Australians are spending more of their incomes on housing than in the past, but low-income households are feeling the pinch most.

Many low-income renters are in poverty, and many more are suffering financial stress. Inequality is increasing because rising housing costs have disproportionately whittled away the income growth of poorer households. A growing number of Australians are becoming homeless.

Low-income Australians clearly need more support with housing. The question is how.

This blog post summarises new Grattan Institute research to be presented at the UNSW Social Policy Conference in Sydney this Monday showing that restoring the National Rental Affordability Scheme – NRAS – is not the answer. NRAS was expensive, inefficient, and poorly targeted. Other policies, such as investing in social housing and increasing Commonwealth Rent Assistance, are better ways to help low-income earners cope with high housing costs.

NRAS was a Rudd-era policy that paid incentives to property developers and community housing organisations that built new dwellings and rented them out to eligible tenants at 20 per cent below market rents for 10 years. The Abbott Government axed the scheme in 2014.

The Department of Social Services estimates the whole-of-life cost of the scheme to the Commonwealth at $3.1 billion, with the final payments to be made in 2026-27.1

Labor promised to introduce a new NRAS program if it won the 2019 federal election. Now advocates of affordable housing are calling on the Morrison Government to reinstate the scheme.

Here’s why it shouldn’t happen.

NRAS was poor value for money

The value of the NRAS subsidy was set much higher than it needed to be. NRAS developers who have ‘grandfathered’ dwellings still on the program receive about $11,000 of public money each year. 2 In exchange, the government ‘bought’ new dwellings that were rented out at a 20 per cent discount to eligible tenants in that year.

The problem is, $11,000 is much more money than developers or landlords need to cover the rental discount received by tenants. In 2016, the value of a 20 per cent rental discount was just under $4,000 a year in the typical suburb in which NRAS properties were built. 3 The leftover value of the subsidy – about $7,000 a year – was essentially a windfall gain for developers and landlords.4

We estimate that NRAS provided windfall gains to private developers and investors of at least $1 billion, or roughly one-third of total cost of the scheme. 5  Community housing providers who built around half of all NRAS dwellings also received windfall gains although they are likely to have reinvested the funds into more affordable housing or a deeper rental discount to tenants.6 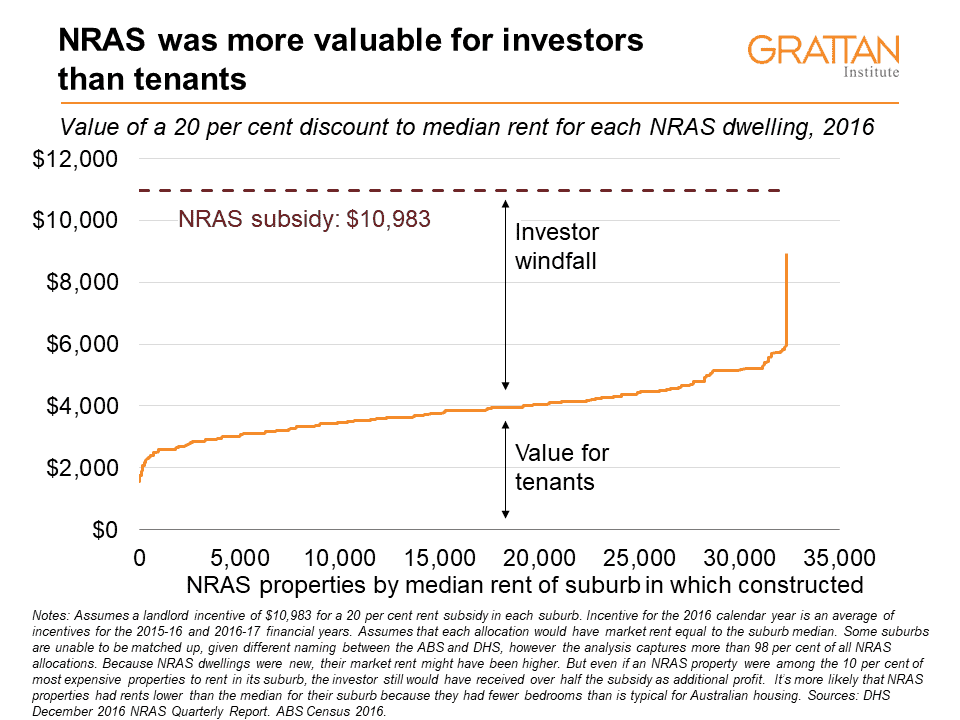 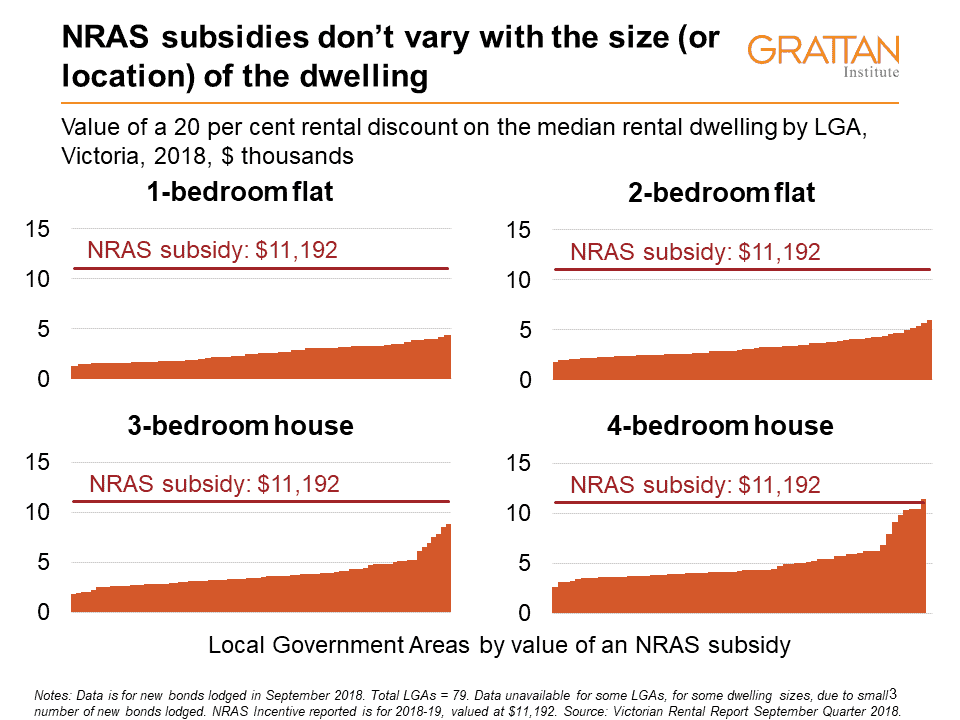 The cost of the scheme was also much too high because the subsidy didn’t vary depending on the location or type of dwelling: the same subsidy was offered for a one-bedroom apartment or a four-bedroom home in the same location. Not surprisingly, the scheme ultimately funded a lot of small, cheap-to-build apartments. 7 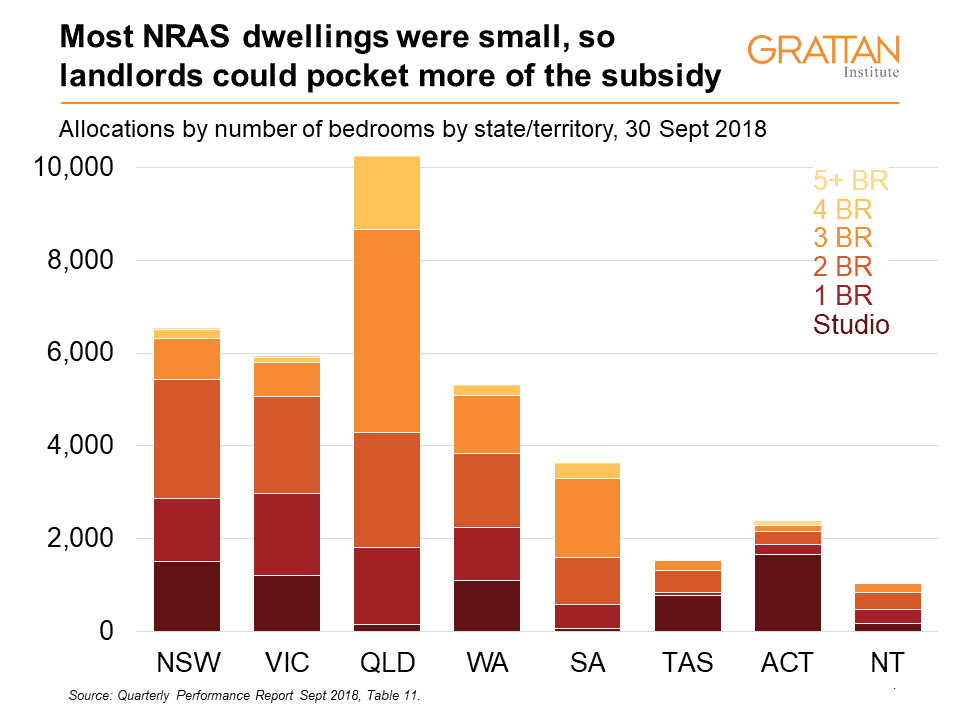 Of course, the fact that NRAS led to the construction of many smaller dwellings is not a problem in itself. After all, there is a severe shortage of smaller one- and two-bedroom homes affordable to low-income Australians. And the existing social housing stock appears under-utilised: 60 per cent of social housing dwellings have at least one spare bedroom. But it is clear that governments got particularly poor value-for-money where NRAS subsidies were used to construct smaller dwellings. The structure of NRAS created especially strong incentives to construct low-cost university and student accommodation.8

NRAS didn’t help people who needed the most support

The eligibility criteria for NRAS properties were far too loose. An individual can qualify to live in one of the NRAS dwellings left on the scheme with an income of up to $50,000, higher than median income in Australia, and a couple can qualify if their household income is below $70,000. That means about half of all Australian households that rent qualify to live in an NRAS-subsidised home.

Far more people were eligible for an NRAS home than there were places available, allocations between them were somewhat arbitrary, and NRAS provided a much bigger subsidy than other government support. Consequently the scheme was in effect a lottery that provided much more assistance to some people than others – and generally not the most needy. 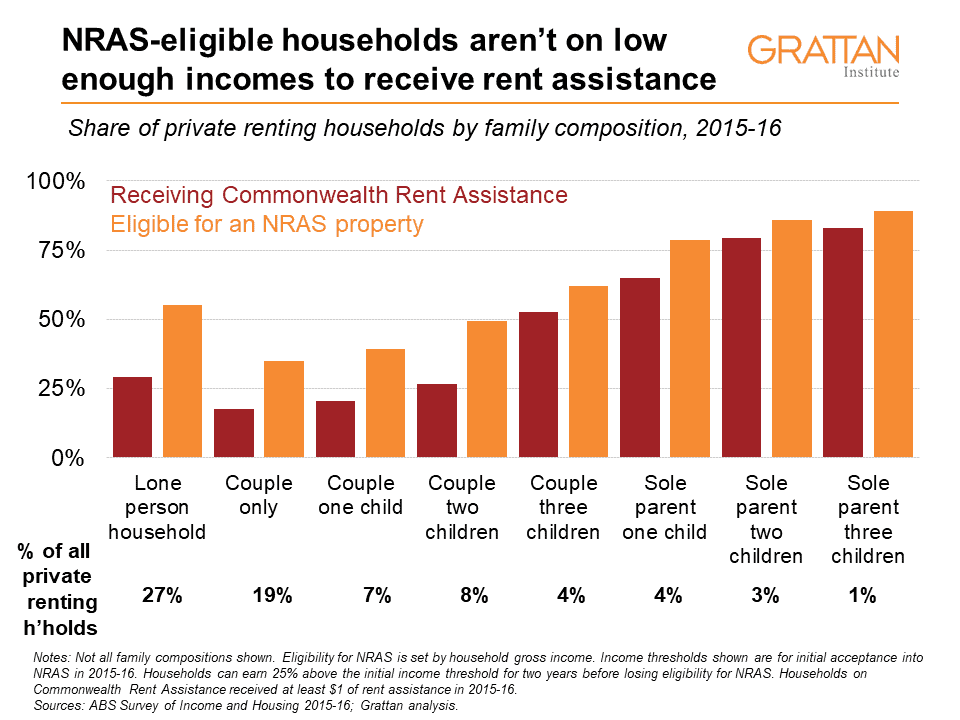 NRAS housing does not appear to have been particularly well targeted at the most needy. Just one-third of the households living in an NRAS home in 2016 had gross household incomes below $30,000 a year, whereas one-third had incomes above $50,000 a year. 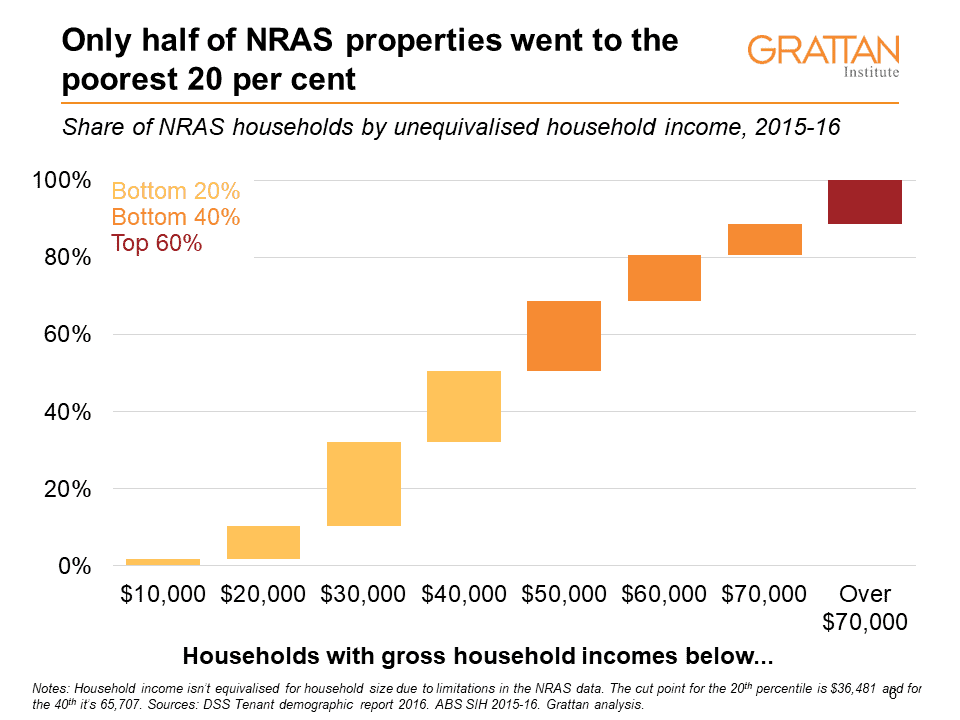 NRAS didn’t increase the supply of housing by much

There’s little evidence that NRAS led to more housing than would have been built anyway. And even if it did, a developer windfall of $7,000 a year is a very expensive way to boost the supply of housing.

Government subsidies don’t create additional housing if they crowd out other private development. Crowding out is more likely when supply is already constrained, as it is in major Australian cities where land-use planning rules prevent greater density in established suburbs. International research confirms that affordable housing tends to crowd out the private market.

Testimonials claim NRAS created substantial new supply. 9 But there is little definitive evidence that NRAS added substantially to housing construction. A 2016 report by the Australian Housing and Urban Research Institute (AHURI) concluded that NRAS did boost supply, but conceded in the fine print that it isn’t possible to determine whether the extra dwellings were truly additional. 10 In evidence to the 2015 Senate Economics Committee inquiry into housing affordability, a Department of Social Services representative said NRAS ‘certainly reduced the rent for the houses in the scheme … however, it was difficult to determine whether NRAS had succeeded as a supply-side measure’.

Nor was NRAS an effective economic stimulus, because providing tax incentives for affordable housing development is both slow and administratively burdensome. NRAS began in 2008 at the height of the Global Financial Crisis, but NRAS construction took off only after 2013, by which time housing construction was already booming. 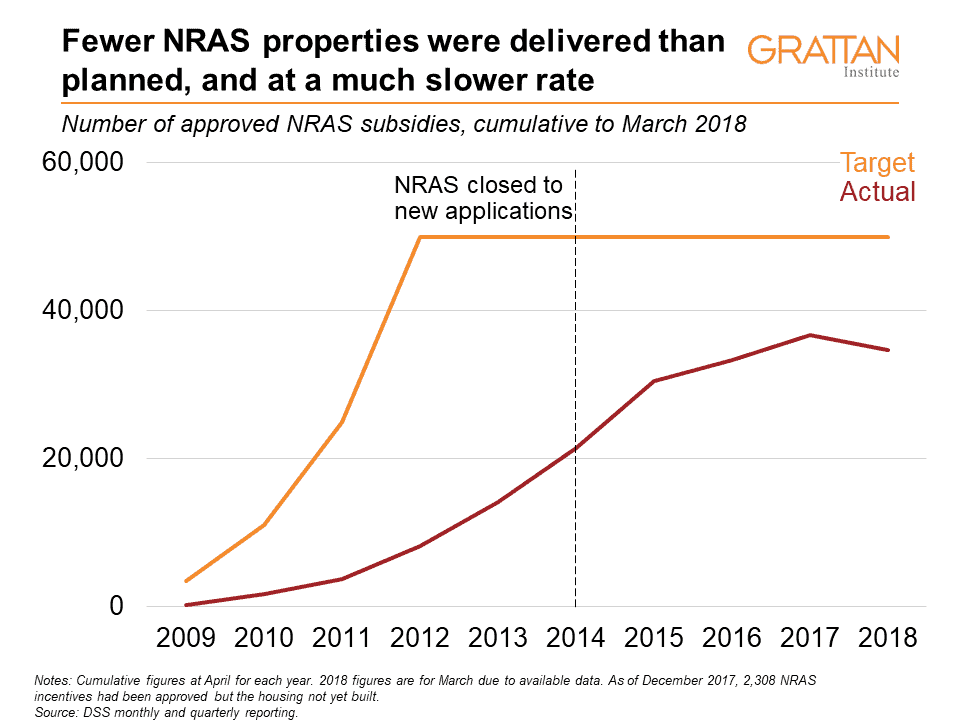 But there are better ways to house low-income Australians

Of course NRAS could be done differently, but there are inherent problems with government schemes to subsidise the supply of affordable housing: they inevitably mean fewer funds are available to help other households in greater need. 11

Instead of reinstating NRAS, state and Commonwealth governments should focus on policies that will do the most (at least cost) to better house low-income Australians.

As a priority governments should build more social, rather than affordable housing, and target it at people at serious risk of becoming homeless. The best Australian evidence and international experience shows that social housing substantially reduces tenants’ risk of homelessness. But Australia’s stagnating social housing stock means there is little ‘flow’ of social housing available for people whose lives take a big turn for the worse.

In particular, the Morrison Government should repeat another Rudd-era policy, the Social Housing Initiative, under which 19,500 social housing units were built and another 80,000 refurbished over two years, at a cost of $5.2 billion.12  The Commonwealth funded the states to either construct social housing units directly, or contracted community housing providers to act as housing developers.13  The economic jolt was immediate: construction approvals spiked within 12 months of the announcement.14 Unlike NRAS, there was little leakage: money spent benefited tenants who could move into the new properties, or whose homes were renovated. A repeat today would provide a more timely and cost-effective boost to housing construction than NRAS.

The Social Housing Initiative was also far better targeted; over half of the new dwellings went to tenants who were homeless or at risk. Many more went to people with a disability, Indigenous Australians, and older people. 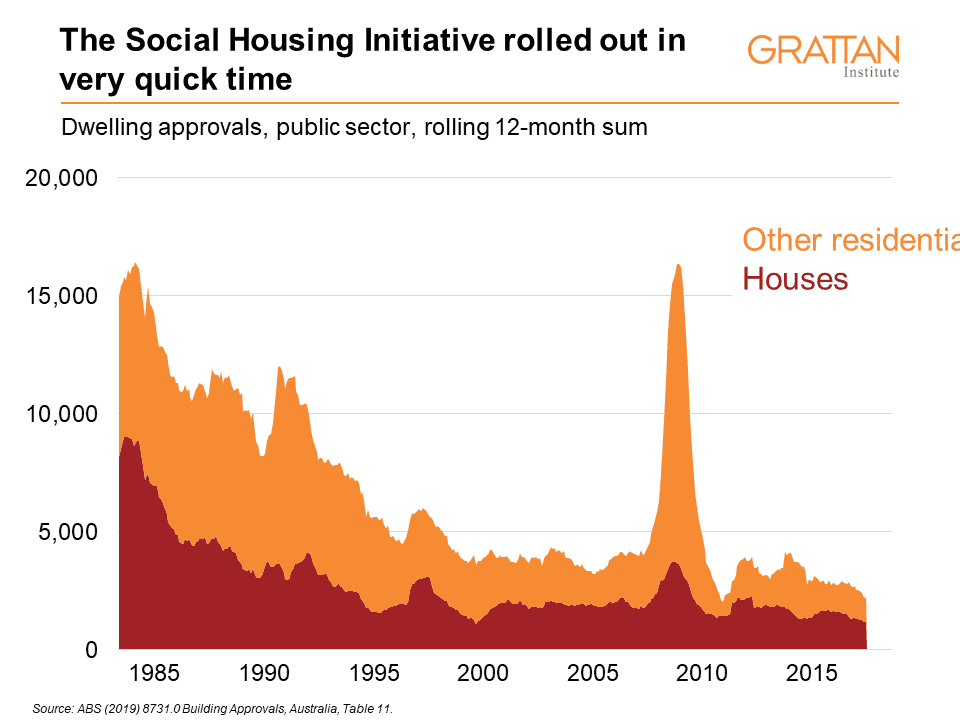 Boosting Commonwealth Rent Assistance by 40 per cent, and indexing it to changes in rents typically paid by people receiving income support, would be a fairer and more cost-effective way to help reduce financial stress and poverty among poorer renters. It’s well targeted: around 80 per cent of Rent Assistance goes to the poorest fifth of households by wealth. Rents won’t change much since only some of the extra income will be spent on housing.

There is a powerful case for governments to do more to help house low-income Australians. But unless we learn from past mistakes, we will wind up with another expensive housing policy that does little to help those who most need that support.

1. The Department of Social Services advises that the total lifetime cost of the scheme has been revised down from $3.3 billion to $3.1 billion since the most recent report on NRAS by the Auditor General in 2016.

2. The initial $8,000 subsidy was indexed to the rent component of CPI

4. Markets rents normally provide a fair return on investment. Therefore the cost of buying land and building on it should equal the net present value of future rents after tax. Ultimately, NRAS developers faced the same trade-offs as developers always do when deciding whether to construct new housing. They would likely have had to obtain financing to cover their costs. They would have had to take risks. If they chose to sell the dwelling, they would have realised any capital gains. NRAS didn’t extract additional value for taxpayers at any of these points. Beyond covering the rental discount, along with some small administrative costs, or compensation for additional risks, there was no need for the scheme to provide such a large subsidy to developers.

5. This estimate assumes that NRAS dwellings were rented at the median rent for their suburb. Because NRAS dwellings were new, their market rent might have been higher, but NRAS dwellings were more likely to have fewer bedrooms and be apartments, which would make them cheaper than the average dwelling. Even if an NRAS property was amongst the 10 per cent of most expensive properties to rent in its suburb, the developer would still have received over half the subsidy as additional profit, and only one suburb in Australia, with only four NRAS dwellings in it, would require a rental discount greater than the subsidy value.

6. Community housing providers – who were the landlords for a a little more than half of all NRAS dwellings – would usually have provided at least a 25 per cent discount to market rents on NRAS properties in order to remain GST exempt.

8. University accommodation was provided in all NRAS funding rounds except the first, and as at 2015, totalled 3,652 active allocations, or just under 10 per cent of the total. Approved participants registered as university providers totalled around 14 per cent of all NRAS dwellings in March 2019.

9. In particular, community housing providers identified NRAS as a useful additional income stream which prompted projects that would otherwise have been financially unviable.

10. While the AHURI report described NRAS as ‘an effective supply stimulus’ (p.1), the authors later acknowledge that ‘it is not possible to determine the proportion of this rental stock that is truly additional’ (p.45).

11. For example, $400 million a year would be enough to boost the maximum rate of Commonwealth Rent Assistance by 13 per cent, or $470 a year for a single. Alternatively, the roughly $4 billion that Commonwealth and state governments combined spent on NRAS was sufficient to add about 14,000 units to the social housing stock.

12. Total Commonwealth funding was revised down from $5.6 billion when originally announced in part due to in-kind land contributions from state and territory governments.

13. For example, in Victoria, Tasmania and Queensland, community housing providers delivered 52 per cent, 44 per cent and 34 per cent of dwellings respectively. In other jurisdictions state governments procured directed constructed social housing.