New Organisation for Economic Co-operation and Development estimates paint a grim picture of the direct economic costs of public health measures to contain the spread of COVID-19, and the need for more government support to cushion the blow.

The estimates cover the economic hit to business that rely on face-to-face contact such as airlines, accommodation and food services, tourism, retail services, arts and recreation and even real estate agents.

Assuming that some sectors see only partial shutdowns, the lockdowns could see 22% of Australia’s economy shut down, marginally less than in other major economies. 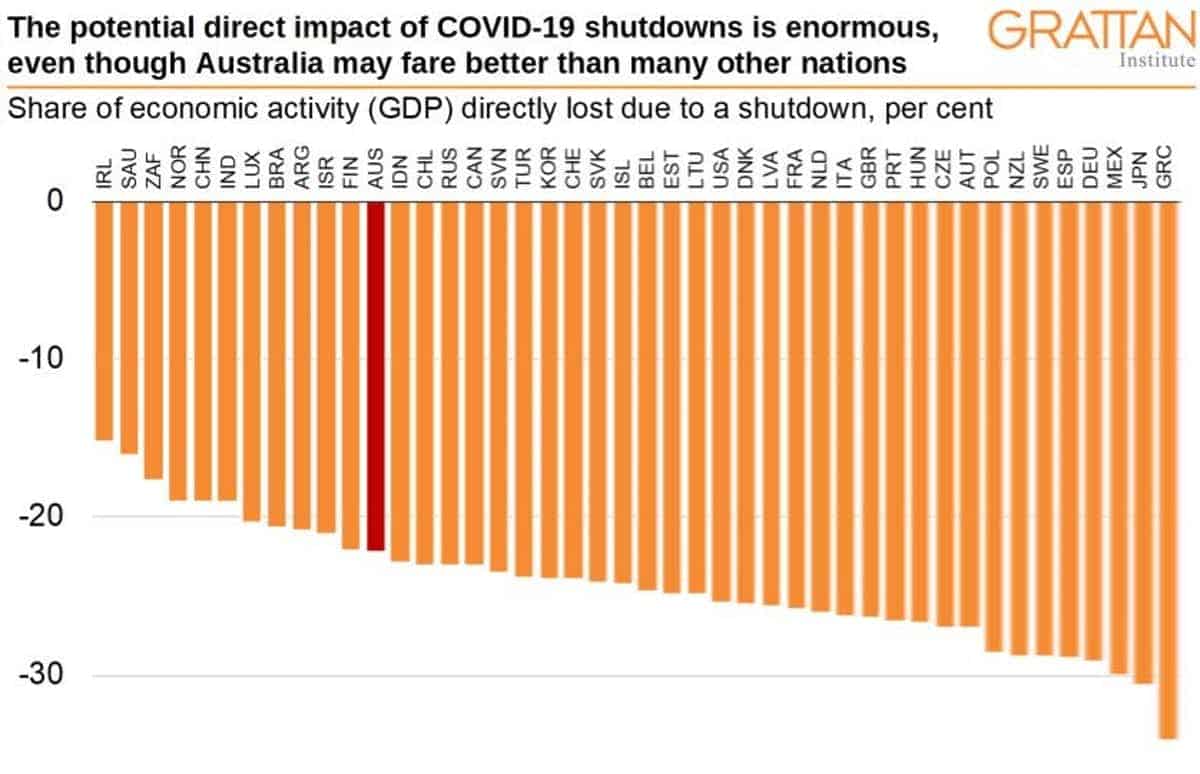 These estimates don’t account for any of any potential offsetting impact on employment of additional demand for workers in expending sectors, such as in healthcare and other essential services. Nor do they factor in the impact of fiscal stimulus measures adopted by governments to date, although these measures are unlikely to prevent job losses in directly affected sectors.

Others may be harder hit

It is worth noting that social distancing measures in Australia remain less stringent than those adopted in many European countries, reflecting the slower advance of the virus in Australia to date. And the economic impact of social distancing measures may play out slightly differently across countries, depending on exactly what the rules are and how they are enforced.

The ultimate hit to annual gross domestic product in Australia will depend on how long the measures remain in place, and how Australian governments respond.

These figures suggest the direct impacts of a three-month lockdown could reduce annual GDP by around 6% of GDP; a six-month lockdown would involve a 12% hit (albeit spread over two financial years).

On these figures, a six-month lockdown could provoke Australia’s worst recession since World War II, if not the Great Depression.

And the estimates ignore second-round impacts of shut downs.

It’s hard to imagine that there would be no further hit to economic activity, beyond these direct measures, even with the stimulus measures announced and about to be announced by the government.

Firms shutting down will have flow on impacts on their suppliers, while laid-off workers will tighten their belts as their incomes fall.

And given the uncertainty over the potential duration of shut downs – the Morrison government has flagged many measures may need to remain in place for six months or more – even firms and households not initially affected by the public health measures will inevitably scale back discretionary spending to preserve cash flow in the face of an extended downturn.

And those second-round effects are likely to be larger the more that firms and households are forced to absorb the costs of an extended shutdown via their own balance sheets.

The OECD’s estimated impacts are likely to be larger once flow-on impacts to other sectors are included.

Public health measures are needed to save lives, but of course they come at an economic cost.

The size of the shock Australia faces points to the need for substantial further support from governments to cushion the blow.