To test the claim that Australian governments are less good at reform than in the past, we really need a list of policy reforms proposed in advance, so that we can see how many were implemented in the following years. Our results using reports from the Organisation for Economic Co-Operation and Development (OECD) are published in a Conversation article, and this post provides more detail on our methodology.

Between 1972 and 2018, the OECD issued 31 Economic Surveys of Australia – about one every 18 months. Each survey suggested policy reforms that the OECD believed would increase economic growth and living standards.

Our analysis of the full series of Surveys for Australia shows that the vast majority of the recommendations that had been made since 1972 were taken up between 1984 and 2001. The Hawke and Keating governments enacted almost all of the OECD’s rolling wish-list, as did the Howard government in its first two terms.

Policy recommendations from OECD Economic Surveys of Australia 1972-2018, by date 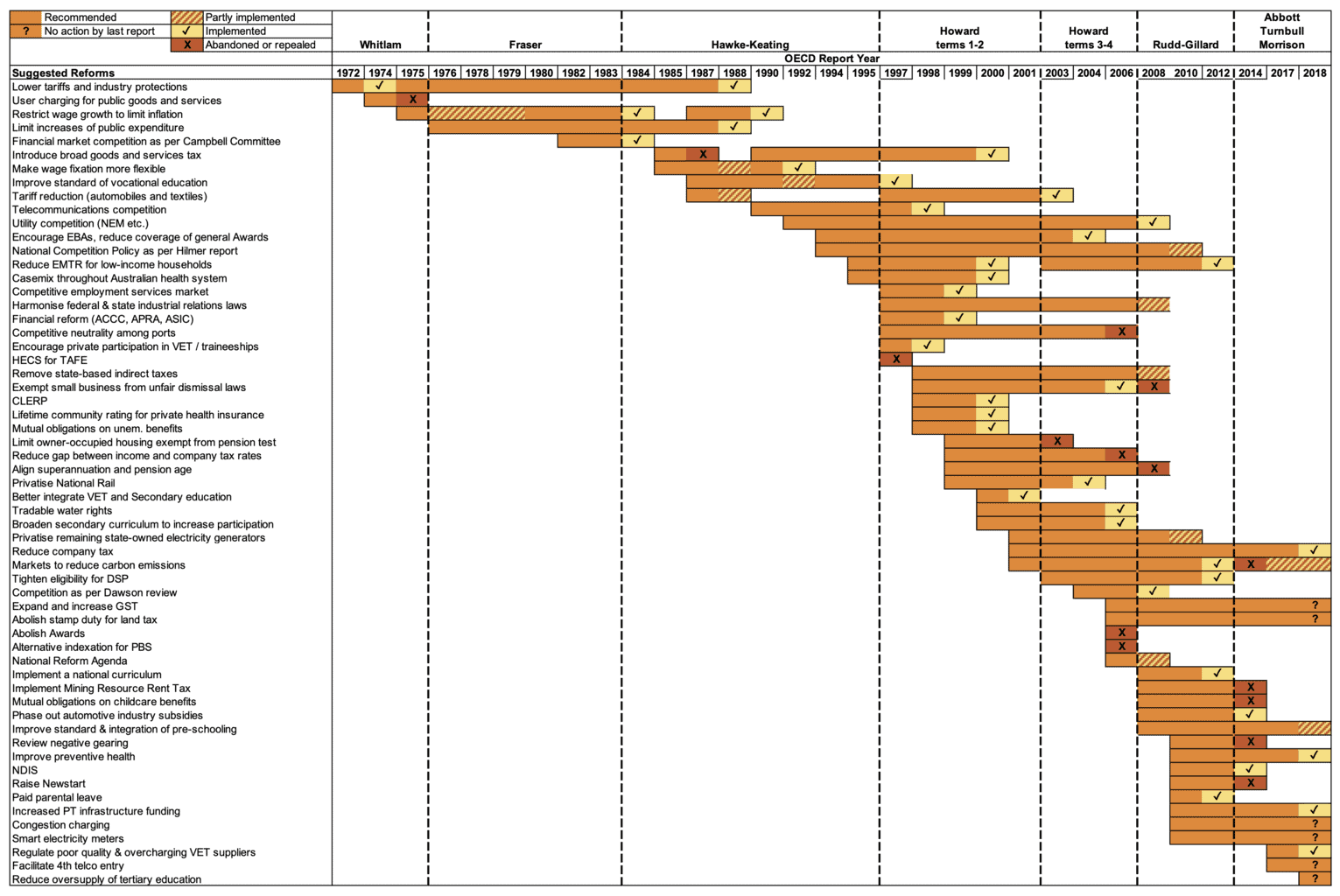 But from roughly 2003 onwards, the record is a lot more patchy: many more of the reforms recommended by the OECD have been rejected, only partially implemented, or, in the case of carbon pricing, implemented and then unwound. Policies that have run into the sand include reducing the gap between the company tax and top personal income tax rates, implementing a mining resource rent tax, reviewing negative gearing, creating competitive neutrality among Australian ports, aligning the eligibility ages for superannuation and the Age Pension, including more of the value of owner-occupied housing when calculating Age Pension eligibility, and raising Newstart. A number of other policy reforms continue to sit in the too-hard basket, such as increasing the rate and coverage of the GST, swapping stamp duties for general property taxes, congestion charging, and using smart meters for time-of-day retail electricity pricing.

Are the OECD Surveys a reliable guide?

As a means to evaluate the history of reform, the OECD Economic Surveys aren’t perfect. Their scope has changed, they are partly influenced by politics, and they recommend reforms that are invariably contested. Nevertheless, they are still a useful guide.
The format of OECD Surveys has changed over 46 years. Surveys before 1990 tended to be more passive, make fewer recommendations, and focus more on reforms that were already underway. Their scope tended to be limited to trade liberalisation, freeing up industrial relations, and limiting public expenditure. Consequently, their recommendations fall well short of a comprehensive summary of Australian economic policy reform.Though the 1990s, the Surveys became more forward-looking, and they expanded to cover more areas. Towards the end of the Hawke and Keating governments, the OECD’s recommendations turned to broader tax reform, competition in utilities, and higher education reforms. During the Howard government, they started to advocate better regulation of the financial sector, health and welfare reforms, and market-based environmental reforms (particularly for water and carbon emissions). In the past few years they have expanded again to advocate better infrastructure provision and charging. 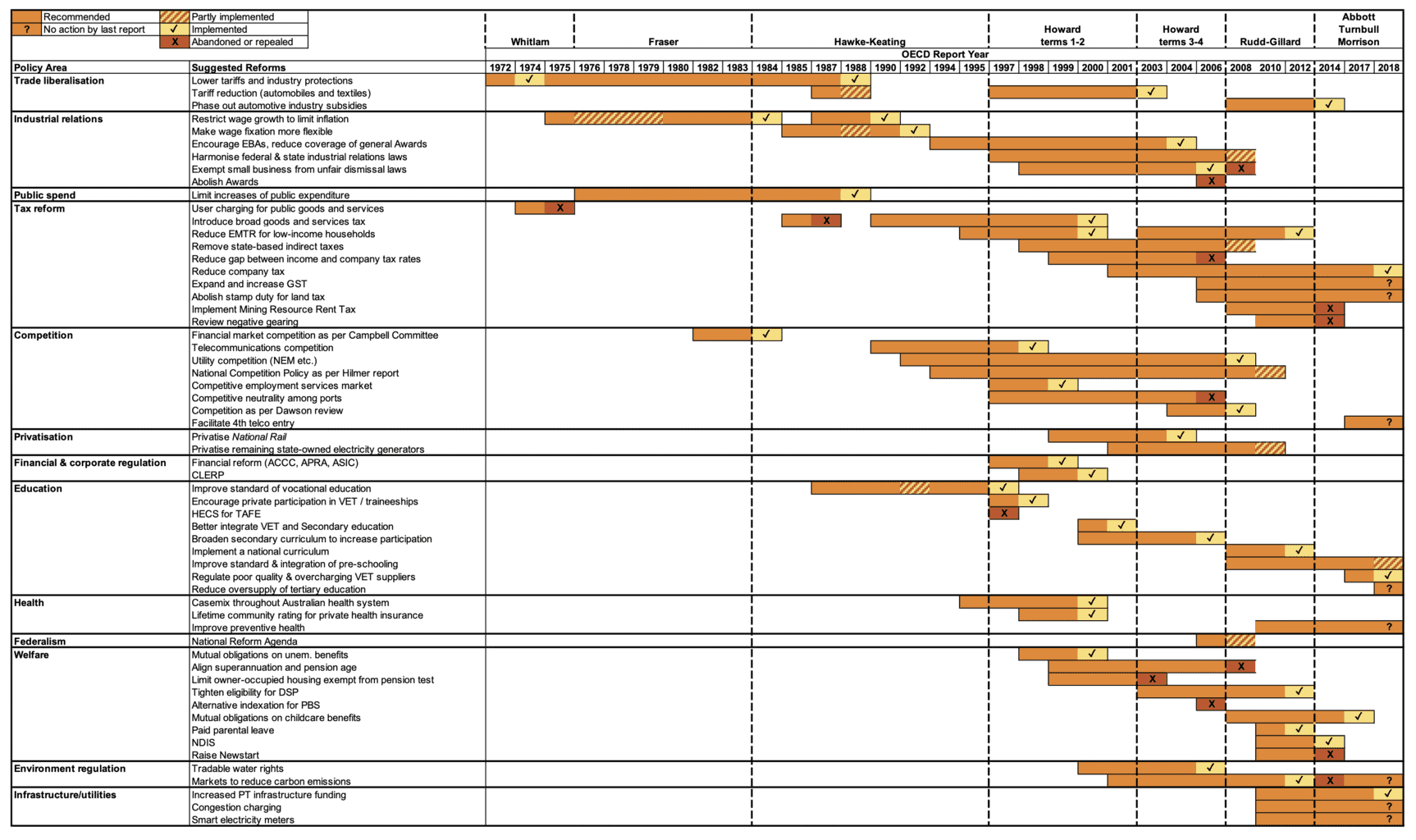 DOWNLOAD IMAGE
Nevertheless, even as proposed reforms expanded into new areas, the Hawke and Keating governments, and the Howard government in its first two terms, succeeded in implementing almost all of them. It appears that Australia’s better record of reform before 2003 is not just a result of the OECD’s changing scope.

OECD reports are partly influenced by political reality. In practice they are prepared after extensive consultation with officials, particularly from the Commonwealth Treasury. They are at least influenced by the priorities of the government of the day. It is hard, for example, to imagine that the OECD would have advocated abolishing awards under a federal Labor government – it advocated this change for the first time in 2006 when the Howard government was in power, and it has not done so again since Labor was elected in 2007. Similarly, it is probably no coincidence that since the Coalition was elected in 2013, the OECD has not again recommended a mining resource rent tax or limiting negative gearing.

Nevertheless, many reforms have transcended governments. Despite political influences, the OECD persistently advocated a number of reforms well before the government of the day was prepared to implement them. Many were first suggested by the OECD under one government, and implemented by the next, including increased competition in telecommunications, tightening eligibility for disability pensions, introducing case-mix funding for hospital systems, and introducing a general goods and services tax and carbon pricing.

And of course, OECD recommendations are not gospel – they tend to reflect a specific set of value judgements regarding priorities and methods. They perhaps had a higher status in public debate in the 1980s and 1990s and were more influential in shaping the thinking of other independent voices. Nevertheless, many policy experts today would support most of the OECD’s recommendations. For example, all of the policies that are on the OECD’s continuing wish-list also continue to be advocated by Grattan Institute.

Thus our review of the OECD Surveys is broadly consistent with popular wisdom, or at least the recollections of old men – the good old days really were better.