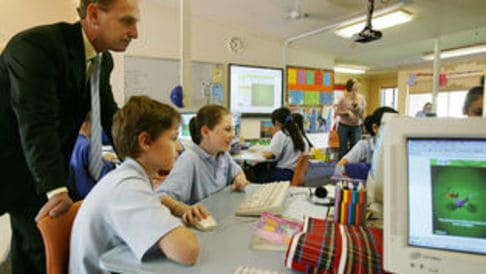 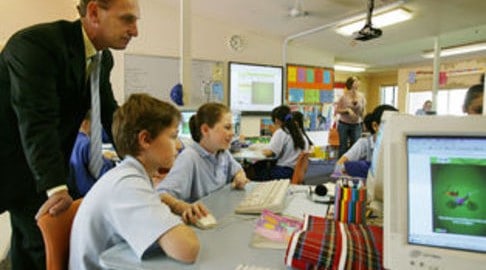 Ensuring every school is a great school is the most important thing in both primary and secondary education. At the same time, there must be a school for every child to go to. This sounds obvious and easy, but rapid changes in demographics mean that it has been harder than it sounds (and US-based results from online charter schools are so poor that full time e-learning is not a viable option)[1].

Online learning alternatives do exist and the education system continues to be disrupted by new technologies, but there is as yet no evidence to suggest online learning can act as an adequate substitute for the physical place of learning: the school. Recent research in the U.S. showed that “the majority of online charter students had far weaker academic growth in both math and reading compared to their traditional public school peers.”

The challenge for Australian policy makers – and parents – is that our population continues to grow in extremely variable ways. Some densely-populated areas will see high growth in demand for schools, particularly inner-city Melbourne and to a lesser extent in the North Shore of Sydney, as well as Western Sydney. Other areas are witnessing rapid growth around greenfield sites, such as Melbourne’s outer growth corridors.

My analysis of population projections[2] shows the incredible pace of this growth in some areas. For example, the local government area of Wyndham (between Melbourne and Geelong) will need around 100 new classrooms every year for the next decade[3]. In Queensland, the outskirts of Ipswich are seeing new suburbs – doubling the size of the city[4] – spring up over the coming years.

In contrast, many middle-ring suburbs are now seeing very low population growth. Regional cities, which depend on regional economies, cannot be easily generalized: some are growing strongly, while others have relatively flat populations. And outside their regional hubs, many regional parts of Australia have shrinking populations of school age children.

We have a patchwork quilt of the growth in education demand, yet education still needs to be delivered locally. So, how do we ensure there is a school available when students need it?

The first challenge can already be seen in the fast-growth areas of the inner-city, where land is already at a premium. Where there has been a failure to put land aside for schools when an area goes under development, such as can be seen at Fisherman’s Bend in Melbourne, the Government (or private interests, in the case of private schools) has to then pay over the odds to acquire the necessary land[5], which has been known to quadruple in value over a short timeframe.

In inner-city areas with only small blocks available for schools, we need to develop different models for what schools should look like. The education departments in Victoria, New South Wales and South Australia each have vertical schools under development – the first government schools of their kind in Australia – in South Melbourne, Parramatta, and Adelaide parklands. These will be multi-storey buildings with outdoor spaces at multiple levels. Even at schools like these it’s of vital importance that kids have access to outdoor spaces in which to play, as this has been shown to be critical for physical and mental development.

When schools become overcrowded, as enrolment rises above the intended capacity of the school, the evidence suggests that students learn less effectively[6]. Overcrowding can therefore be a real problem for educators and school planners, more so than the size of the school per se.

The growth we’re now witnessing in inner Melbourne and Sydney is the result of a ‘mini’ baby boom that occurred around 2006[7]. The first children of that boom are currently in Grade 5. Planning was further complicated by the fact that young families often choose to stay in inner city apartments rather than moving out the suburbs.

The second challenge occurs in the brand new suburbs such as those in outside of Ipswich in Queensland, the new developments to the south of Perth and in Melbourne’s growth corridors, and some parts of Western Sydney. These areas will see long-term population growth and so new schools will absolutely be needed, not just temporary classrooms.

The complication is that the location, design and culture of schools in a brand new area can greatly influence the integrity of that community. The local primary school in particular should become the beating heart of the community, bringing people together, and developing community spirit with fetes and similar events. Given that there are few pre-existing community services, these primary schools should be designed to include early learning and childcare facilities – even maternal health services. State Governments are aware of the importance of the school as the heart of the community, and have been trying some new models, such as community hubs[9], that integrate a range of services with schools.

However, the evidence around what models work best is still mixed[10], and it will be a continuing challenge to ensure we get these right. If a new suburb doesn’t develop a sense of cohesive community as the first generation of children grows up, it will face much bigger challenges further down the track.

In some regional areas, where the population is shrinking, some schools will face eventual closure. Just as challenging, they will need to find ways to adapt to shrinking class sizes and fewer resources to offer a diverse and rich curriculum in the intervening time. Yet, no less than any other young Australians, students in these schools deserve a high quality of education the entire time.

Long-term planning is essential, especially in selecting the right sites for new schools. That is to say, school planning needs to ensure schools are becoming available at the right time, before current schools become overcrowded. Being half a step ahead in planning is probably cheaper and better in terms of education outcomes than being two steps behind and needing to catch up. How well this has been done so far varies by state.

Victoria and New South Wales had, overall, no growth in the school-age population11 for around 20 years, from the mid-80s to the mid-00s. They are now playing catch up, because their new normal is high population growth.

To deal with these changes, both Education Departments (which do the planning) and Treasury (which approve the funding) must operate in new ways in order to scope new projects and approve investments, as well as engage with the community on a different level. The launch in May 2016 of the Victorian School Building Authority is a sign that planning is getting more high-level attention, and New South Wales has also announced record investment in school infrastructure[12].

In comparison, Queensland and Western Australia have had somewhat more consistent growth in population[11]. This allows more of a ‘continuous build’ mindset, which is intrinsically more efficient than a reactive approach that occurs in fits and starts when pressures become too much to bear.

South Australia and Tasmania have seen and slowly shrinking of school populations[11] so they’ve been weathering the impacts of the third scenario as described above. Their big challenge is how to keep schools thriving even as enrolment naturally shrinks.

For the educators themselves, it’s important to gather relevant data that can inform on the size of each local cohort and when they’re expected to arrive in schools.

But doing this planning school-by-school is the wrong answer. Ultimately, the education system is interconnected, regardless of how we might see it from time to time. This means that the entire system will benefit from greater levels of communication between Government schools, Catholic schools and independent schools of all kinds. A consultative, rather than purely competitive, approach should be considered between these various groups in the interests of gaining the best results for the entire student body.

Existing schools will also be affected. Some schools will need to rethink their catchment areas. This is particularly true of popular secondary schools in high-growth neighbourhoods who are expected to be hit with a wave of enrolments in the next two-to-three years as the 2006 baby-boomers start high school.

In the longer term, existing inner-city schools blessed with extensive grounds should expect to come under pressure for their space to be used to benefit the broader community, representing an operational and design concern for them. Under what terms will those spaces be used and how does the school manage the situation? Some schools may see it purely as a challenge, while others may grasp it as an opportunity to demonstrate additional value. In cities that are becoming more densely populated, land becomes increasingly more precious and needs to be used efficiently.

The Next Decade is Vital

While there is always uncertainty in population projections, Australia’s total population as well as the number of births is forecast to grow over the long term[13]. That means the next decade is an opportunity to experiment and learn how well different approaches work. All of us in the education space must take on board this opportunity, because we’ll need that experience for the next decade and the one after that.

Growth in Australia’s population is higher than we’ve seen since the 60s and 70s. Now is the time to begin systematically planning, implementing and testing new approaches and new designs for schools, for the benefit of future generations of students.

2. Goss, P. (2016) Should you worry about a schools shortage? It really depends on where you live. The Conversation

9. See The National Community Hubs Program, an initiative of Community Hubs Australia, supported by the Scanlon Foundation and the Australian Government Department of Social Services.