Skill shortages are no basis for picking permanent migrants

Australia should not target skills shortages when it selects workers for permanent residency.

At present, the government allocates employer-sponsored and points-tested visas only to occupations deemed to be in short supply in “the medium term”.

With government officials lacking timely data on changes to wages and employment for each of the one thousand or so six-digit occupation codes, industry and other groups have considerable input into selecting those occupations in a process described by experts as a “black box”.
As a senior ofﬁcial from the department of jobs and small business described the process,

“a lot of the time we will have submissions and other views put forward by stakeholders, but there’s not necessarily evidence or a dataset”

Even if the list is compiled well, there is no particular reason to think that temporary or even “medium term” skill shortages are the best criteria for selecting permanent migrants who will live and work in Australia for decades to come.

Most skill shortages are temporary.

Australia’s demand-driven education and training systems are designed to fill shortages over time. Where they don’t, wages for workers with those skills will stay high.

Shortages ought to be temporary

But our “skilled shortage” lists include many low-skill low-wage occupations.

The chart below shows each occupation by its size, an average “competency” score as derived from the Australian Skills Classification, and the share of workers in the occupation earning more than $80,000 a year – about the median full-time wage.

It shows that the main list for permanent skilled workers, the medium and long-term strategic skills list (MLTSSL), excludes some high-skill, high-wage occupations, but includes many low-skill and low-wage occupations. 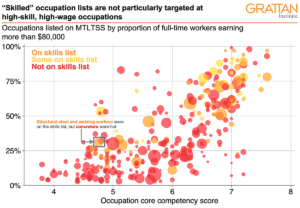 In part this is because targeting permanent skilled visas on the basis of occupations ignores the fact that jobs and wages vary within occupations.

Jobs tell us more than occupations

Jobs, and the wages they offer, are a better guide to skills than occupations.

The chart below breaks occupations into their jobs.

It shows how poorly the MLTSSL targets high-wage jobs. 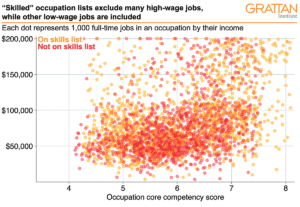 There is a better way.

Rather than drawing up occupation lists, the government should assess which migrants bring valuable skills simply by looking at the wages their jobs attract.

Wages tell us the most of all

Employer sponsorship should be available for workers in all occupations, provided they earn above the median full-time wage of $80,000 a year, as illustrated in the chart below. 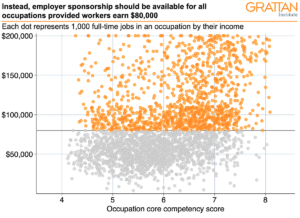 Existing safeguards to prevent fraud and underpayment would remain.

Employers would still be required to offer a wage above the relevant annual market salary rate, and wages would require veriﬁcation via a certified employment contract.

We believe the change could boost the lifetime taxes paid by each annual intake of permanent skilled migrants by at least A$9 billion.

Points-tested visas should be reexamined

The same points apply to the occupation lists used to prioritise applicants for the separate system of points-tested visas.

Applicants ought to be assessed on whether they are likely to succeed in the Australian economy long term.

Age, experience and education are strong predictors of future success. But the current points test is bloated, offering points for characteristics (like regional study) that don’t predict long-term success.

The extra state-nominated and regional points-tested streams produce poorer outcomes still in terms of the skills and incomes of selected migrants.

They need to be reviewed.